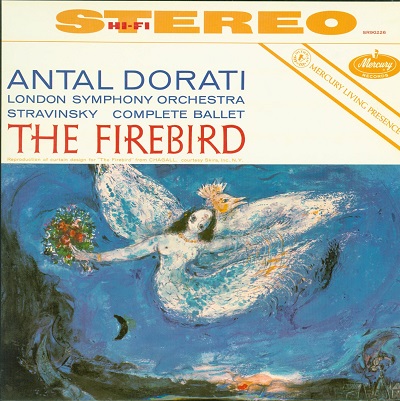 Stravinsky was a late bloomer.  His parents tolerated his interest in music, but wanted him to go to law school, which he did.  His father was a well known basso singer in St. Petersburg, where Stravinsky was born  in 1882 (11 years before the death of Tchaikovsky).  His father’s death in 1904, allowed Stravinsky to pursue composition. At that point, he became a very fast learner, attracting the attention of the great Rimsky-Korsakoff, who gave him private lessons. The public performance of one of his first works, “Fireworks” was attended by Sergei Dhiagalev, the great impresario of the Ballets Russes, based in Paris.

Dhiaghilev and the Ballets Russes

Dhiaghilev was from St. Petersburg, a decade older than Stravinsky. He formed the Ballets Russes to bring Russian ballet to the west, particularly to Paris. He hired members of the Imperial Ballet to perform, during their off season in the Summer.  However, his ballets departed from the traditional ballet of Imperial Russia, incorporating modern music, scenery and dance. The great Vaslav Nijinsky was its star performer and choreographer, considered the finest male ballet dancer of the early 20th century. Other great dancers were Anna Pavlova, Alicia Markova, and George Balanchine, along with the great choreographer/dancer Michel Folkine. Dhiaghilev commissioned contemporary composers like Debussy, Ravel and Poulenc. Set and costume designers included Matisse, Miro, Coco Chanel, and Picasso.  For its second season in 1910, Dhiaghilev commissioned the unknown Stravinsky to write a ballet based on Russian legends, The Firebird.  It was immediately a great success, making Stravinsky, the toast of Paris. It led to a second ballet for the next season, Petrushka.  In 1913, Stravinsky wrote Rite of Spring. was a revolutionary piece, full of elemental and complex rhythms as well as pagan rituals and sacrifice. The choreography was as revolutionary as the music.  At its premiere a riot took place, with supporters and detractors fighting in the aisles, about both the music and choreography.

To Stravinsky’s chagrin, these three ballets, written at the beginning of his very long and productive career, remained the most popular pieces that he ever wrote.  This was helped no doubt by a suggestion by conductor Pierre Monteux who told Stravinsky that the three pieces would work well as stand alone orchestral works, without accompanying ballet. And that is how all three are mostly heard today. Stravinsky also had major problems with the copyright law not being enforced in Russia, and this led him to reorchestrate many of his works on a regular schedule to make sure he would receive the proper royalties. So one will often see a notation on a recording that it is the 1947 version of Petrushka, rather than the 1911 original version.

Dhiaghilev also hired two conductors who would live and conduct well into the latter half of the 20th century and stereo era of recordings.  They were Pierre Monteux who conducted from 1911-16 and 1924, and Ernest Ansermet who conducted from 1915-23.  Dhiaghilev died in 1929 and the Ballets Russes was disbanded.  Successor companies were formed and many of the dancers and choreographers went on to successful careers, including George Balanchine who founded the New York City Ballet.

Recordings will vary between different editions of the score and also whether they are of the complete ballet or a suite of excerpts.  The complete ballets usually take all or most of a record, while the suites fit nicely on one side of  a record.

The Firebird was a combination of two different legends – that of the Firebird and her golden apples and the villain Koschei.  The hero Prince Ivan captures the Firebird, who gives him magic feather in return for freeing her. Ivan meets 13 princesses who are being held captive by Koschei, and falls in love with one of them. He is captured, but summons the Firebird using the magic feather. The Firebird casts a spell and tells Ivan how to kill Koschei by destroying an egg where his soul is kept.  Ivan kills Koschei and the spell is broken, and Ivan and his princess are united. The choreography was by Michel Fokine.  Stravinsky arranged the music into a shorter suite, which he revised last in 1945, to obtain copyrights in the US. 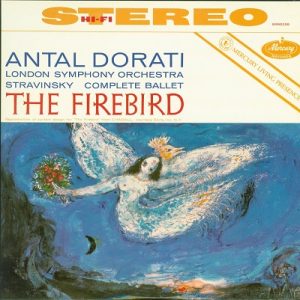 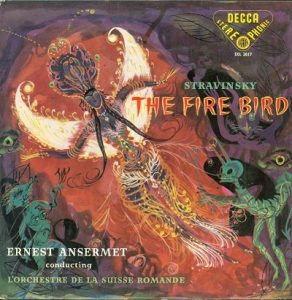 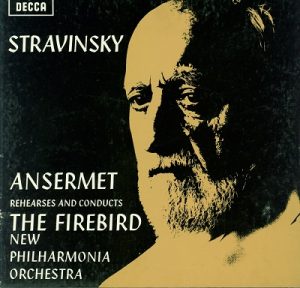 For the Firebird, the greatest recording for me is by Antal Dorati with the London Symphony Orchestra on Mercury (SR-90226). It is a spectacular recording, one of several that Mercury did in London with Dorati and the London Symphony.  The climactic moment of the piece has a deep, loud bass drum whack, which can shake the room with its intensity.  My copy is an original early pressing, but both Classic Records and Speakers Corners have done excellent reissues.  There is also a CD that is quite fine.  Another superb version is by Ernest Ansermet on Decca (SXL-2017) recorded in the mid 1950’s in the very early days of stereo.  The sonics are wonderful and Ansermet is conducting his own L’Orchestre de la Suisse Romande, based in Geneva.  Ansermet founded the orchestra in 1918 while he was conducting the Ballets Russes. He continued as music director for almost 50 years, until 1967, two years before his death at age 85.  Ansermet was a close friend of Stravinsky and a picture of the two of them, with Serge Prokofiev, is in my Blog 1. Stravinsky started conducting the Ballets Russes two years after the Rite of Spring, but during the period when Stravinsky was continuing to write ballets regularly for the company.  Ansermet thus premiered many of Stravinsky’s works.  Many consider his interpretations definitive. Ansermet recorded the Firebird once more in 1968 with the New Philharmonia Orchestra in London. Decca released this two record album (SET 468,468A) as a memorial to Ansermet after his death in 1969. The second record is a recording of Ansermet rehearsing the Firebird, quite fascinating to hear how he works with the orchestra – with great authority.  During the time I played viola with my daughter’s youth orchestra, we played the Firebird Suite and I got to appreciate how difficult the cross rhythms were in the piece. 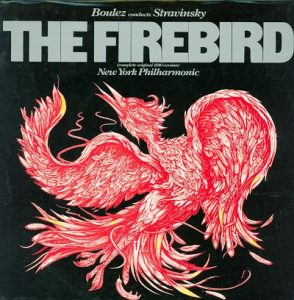 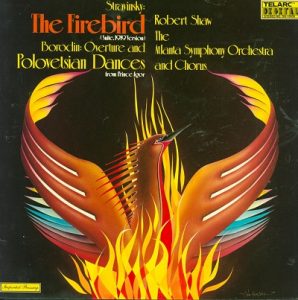 Two additional recommendations are both TAS Superdiscs.  They are the 1910 complete ballet conducted by Pierre Boulez and the New York Philharmonic (Columbia M33508), and the 1919 Firebird Suite conducted by Robert Shaw and the Atlanta Symphony Orchestra. (Telarc DG-10039) The suite is paired with a fine performance of the Polovtsian Dances by Borodin.  The recording is digital, but of very high quality.  It is also available on an audiophile CD issued by FIM (First Impression Music) (LIM UHD 057). The recording was remastered in 2011 by former Telarc engineer and multi-Grammy award winner, Michael Bishop.  Bishop also did the engineering for the CD1 and CD2 included in my Decca Book (published by FIM) (see About Larry in the home page of this blog, Zero-Distortion.org)