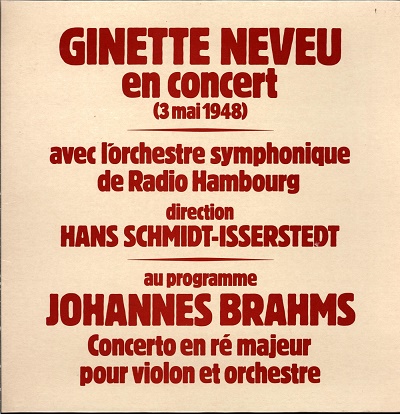 Johannes Brahms is the third B – with Bach and Beethoven. He also is the least known and probably the least admired. I certainly felt that way growing up. However, as I have reached the biblical three score and ten, I have come to view Brahms in a different way. To me, he remains third in admiration – but closer to first in love.

Brahms lived a full life, long for his time, dying at the age of almost 64. However, during that time he composed relatively few works, except for those for solo piano and lieder. One major reason was the Brahms was very self-critical and would constantly revise works, sometimes over decades. So works begun in his youth would not be completed until his maturity. He also would destroy works that did not meet his high standards. He is most famous for his four symphonies, four concerti and various groupings of chamber music. There was no opera and little choral music, with the great exception of the German Requiem. My plan in these blogs is to focus on three areas of Brahms’ music: his four symphonies and some associated shorter orchestra works, his four concerti, and his chamber music.

I want to discuss his four great concerti. He wrote two piano concerti, one violin concerto, and one double concerto – for violin and cello. All of them rank as among the greatest concerti ever written. The first of two blogs will focus on his Violin and Double Concerti. The second will concentrate on his two piano concerti.

Beginning with his Violin Concerto, I would rank it with the Beethoven Violin Concerto as the high point of violin concerti. Brahms combines a grandeur of conception and power with real emotion and beautiful lyricism in the piece. Brahms originally conceived it as a four movement piece, more like a symphony in structure than a concerto, which normally has 3 movements. However, after writing the middle two movements he substituted the single slow movement which is now in the concerto. He did reuse one of the two abandoned movements as the scherzo of his four movement Piano Concerto 2.

Brahms wrote the concerto for his close friend, the famed violinist Joseph Joachim, who at the age of 12 had raised the Beethoven Violin Concerto to popularity, two decades after Beethoven’s death. Later as a young man, Joachim befriended Brahms, introducing him to Robert and Clara Schumann, and beginning a life long friendship. Joachim worked closely with Brahms on the concerto and even wrote the cadenza for the concerto. The concerto is of grand proportions, in many ways similar to Beethoven’s. The first movement, in double exposition sonata form combines both lyrical and fiery violin music. Brahms unusually does not give the orchestra a second theme in its exposition, but saves this most beautiful lyrical theme for the violin’s exposition. The movement is long and complex. The second movement is much simpler, a beautiful lyrical piece which is followed by a gypsy like rondo third movement, where Brahms also incorporates a Viennese waltz and a Turkish march. 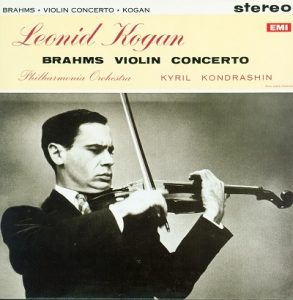 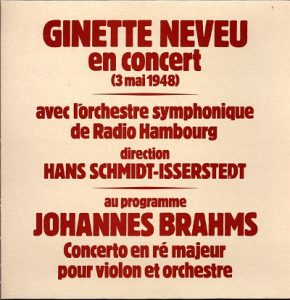 The Violin Concerto is not a piece (unlike the Tchaikovsky, Mendelssohn and Sibelius Violin Concerti) that is often played by students, and not all of the great violinists have recorded it. Some of the great recordings of the stereo era include those by Heifetz at his typical faster than normal tempi (which I grew up on), an early stereo RCA recording (RCA LSC-1903 pictured above), and Kogan, who did a much sought after recordings for EMI, with Kiril Kondrashin conducting the Philharmonia Orchestra. Like other Kogan recordings on EMI Columbia SAX, this one has reached extraordinary prices on the used market as of 2016/7, over $5000. The copy I have pictured from my collection is the fine Testament reissue. My favorite is one by a much lesser known violinist, Ginette Neveu, and comes from the mono era. It was recorded in 1948 from a radio broadcast, less than a year before she would die in a plane crash at the age of 30. There are several issues of this performance. I have two of them. My favorite is on the Italian label STIL (pictured at the top), which was issued in the 1970’s, in a remarkably vibrant and clear, I would say modern, sound that belies its age. The conductor is Hans Schmidt-Isserstedt, who was the music director of the North German Radio Orchestra in Hamburg. He was given that position by the Allies after the war (WWII) who were engaged in the denazification of Germany. Neveu, born in France in 1919 had gained world wide acclaim at the age of 16, when she entered, against much advice, the first Henry Wieniawski Violin Competition for Violinists under 30 in 1935. The strong favorite was the already well known Russian violinist, David Oistrakh, ten years her senior. Neveu won the competition, with Oistrakh coming in second. For many years Soviet publications wrote in biographical sketches of Oistrakh that he had won the competition.

Brahms’ Concerto for Violin and Cello, also known as the Double Concerto was the last of his four concertos. Like the violin concerto, it was dedicated to Joseph Joachim, who was considered by many the finest violinist of that era. Joachim and cellist Robert Hausmann premiered the concerto with Brahms conducting.

Double concerti are quite rare in the literature, with most of them having two identical instruments which can echo each other, such as the Double Violin Concerto of Bach and the 2 Piano Concerto of Mozart. Particularly with two instruments which are far apart in range, it is much more difficult to balance the parts. Brahms expressed concern while writing the piece, but was able to mesh the instruments, sometimes, as in the first movement, using them separately, and in the second movement using them in harmony. The second, slow adagio movement is one of the most beautiful of all slow movements in the literature. 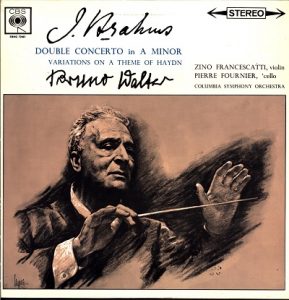 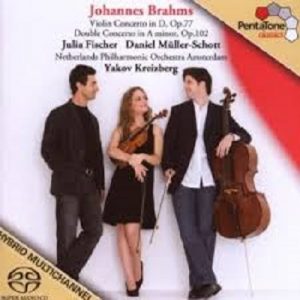 My favorite version of the piece is with Zino Francescatti playing violin and Pierre Fournier playing cello and the great Bruno Walter conducting the Columbia Symphony, a hand picked studio orchestra brought together for Walter by Columbia Records, which issued the album in 1960 (pictured at the top is my British copy of the album). The record also includes Brahms Tragic Overture. A fine modern digital recording has Julia Fischer on violin and Daniel Mueller-Schott on cello on a Pentatone SACD. The album also includes a fine performance of the Violin Concerto with Fischer.