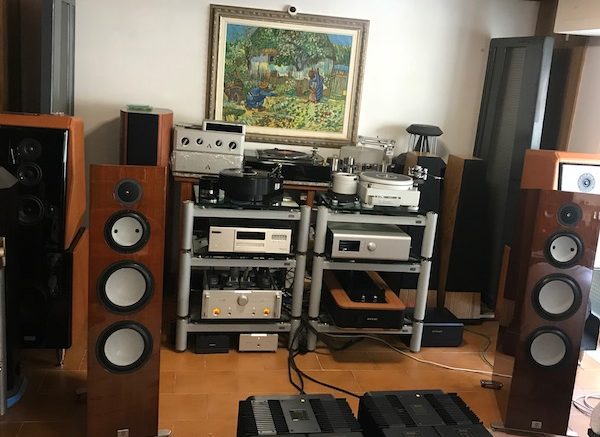 A big thumbs up to Gian for introducing me to Emanuelle of Audioplus in San Benedetto Del Tronto, Italy, who had the answers to most of my TT queries. Audioplus is a distributor for Italy for many products, most notably Techdas, Soulution, Allnic, Absolare, and Marten, and receives a lot of trade ins.

Where else will you get to compare side by side

Additional bonus: Compare the Allnic with the built in phono in Soulution 520 preamp

The Brinkmanns had the RoNT tubed power supply.

We started off listening to the Techdas and the Balance. This was a difficult choice. The Balance has an excellent full tone, and the linearity through midbass is evident. Techdas has more punch, and can rock better. Both have an excellent soundstage, the Techdas is bigger, but in most systems the difference on stage won’t matter. 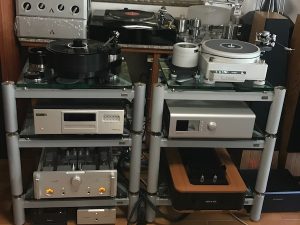 Replacing the Balance with the Lagrange, I realized that the smaller brother shows the same tonal character of the Balance, is a bit livelier, but not as composed from top to bottom. The Balance is an extremely composed TT, in fact I am using this word to describe a component only after listening to the Balance. The Lagrange will make you want more, the Balance not so. 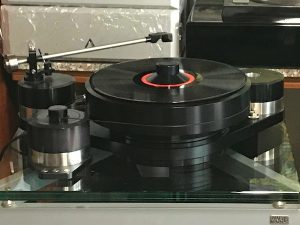 Replacing the Lagrange with the Monaco, I expected some fantastic bass, control, and dynamics. Instead, I got a loss in 3d, the sound became flat, tonal differences disappeared. I let it warm up a bit, but the sound did not change. The sound was thin and had less bass, and the decays were lost, as was the depth. The Techdas was playing next to it, but the previous two TTs had also been superior on every aspect. Please read Fremer’s review, page 4

The only other explanation could be that this was voiced for triplanar, and we had on a Graham 1.5 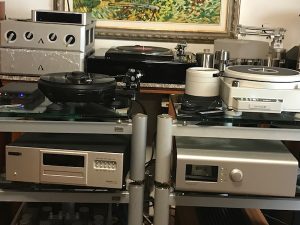 A bit disappointed, we moved to the SP10 mk2. I am not aware of the plinth details, but Emanuelle mentioned it was a well known restorer from Germany. The Technics was much superior to the Monaco. In fact, at a macro level, it was fine – nice sound and tone, and for the money did extremely well. However longer listening showed that it did not do nuances as well as the Brinkmann and the Techdas – you could not hear the nuances of violin and piano, and they would not be extended as far upwards or downwards. The bass was more one note and less textured. It did hold its own together in tuttis. The flow from one note to the other was also better on the belt drives. The Technics was excellent  at its price point. 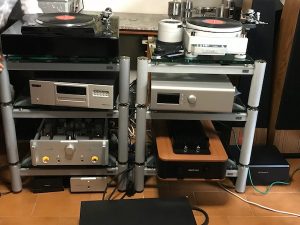 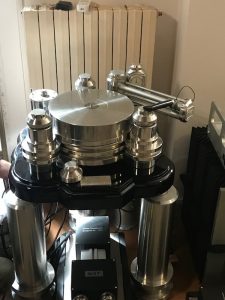 The Brinkmann is excellent value for the money. With Techdas you can keep going up the range – from Af3 to AF3 premium and upwards – and those who can afford it should buy it. Those on a budget, buying a traded in Brinkmann could be one of the best analog deals you will make in my opinion. Both do not have suspension, and the Brinkmann has been voiced on the HRS and should sonically sound better on that platform. The Techdas AF2 and the AF1 have suspension, so the AF3 will no doubt benefit from adding a vibraplane or such.

At various times during the day, I went back and forth between the Allnic and the Soulution. This was done in two ways:

In the second case, the Allnic phono to Soulution pre did not sound quite right, and using the Soulution one box immediately yielded an improvement.

In the first case, I went back and forth a few times. This is the perfect ying and yang, both have their strengths and weaknesses. The Allnic has more flow, bloom, tone. The Soulution has better leading notes, makes the music appear quicker in a good way, and makes you focus on each note due to a sharper start to the note. The Allnic creates a soundstage in the room, so your room becomes the venue. The Soulution transports you to the venue in the recording, and also gives you an excellent sense of space in a different way. The Allnic shows you more the sway of the violinist and how the pianist moves from the right to the left buttock, while the Soulution allows you to feel the intensity of the strike of the note.

Ideally, one would need both a SS phono and a valve phono to enjoy music in different ways. If you think of what Allnic does positively, and take it away, you might get a negative view of the Soulution. That is not the right way to view this. These are different approaches. Many of my Indian friends who have never had sushi before, think of spiced fried Indian fish or curry, then imagine that fish raw, and feel disgusted at the thought of sushi. However, this is the wrong way to view this – both are different cuisines and different ways of enjoying fish.

The Allnic had the stock recti. I am big fan of the H3000 with the recti rolled to KR 5U4G, and have found the H5000 to be better than the Aesthetix IO Eclipse and the older Dartzeel in a shootout with various carts. At least in conal and planar systems, Allnic is the finest valve phono I have heard, provided the recti is rolled. Never heard it in a horn system. The H7000 is a replacement for the 3000, and is not a model above the 5000. The H7000 that Emanuelle had will be much more improved following more break in and valve rolling, and he did mention it was much better than the 3000. I have previously compared the 3000 to the Zesto Andros 1.2 and the Trulife and found the Allnic to be superior once the recti is replaced. It is also an extremely natural fit for Stats, as found in Paul S’ Martin Logan system (report to follow)

Audioplus receives a lot of trade ins and has excellent deals available. Those interested in a wide variety of gear – note, in the pics, the Clearaudio table in the background, as well as the Apogee Divas, NAT SE2SE, Tannoy Gold Monitors…should keep a check on their site.

Be the first to comment on "Turntable Shootout in Italy"