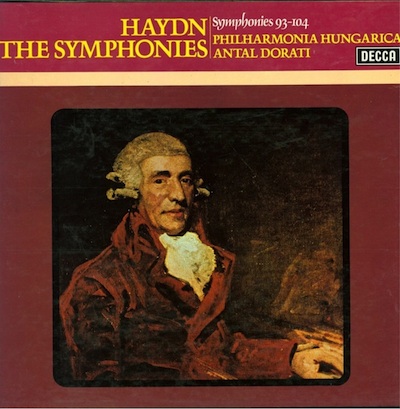 Papa Haydn was, by all accounts, the nicest, kindest great composer who ever lived. During his long life (1732-1809)he was a friend and mentor to the younger Mozart whom he preceded in birth by 24 years, and followed in death by 18 years. He was also one of Beethoven’s teachers, though that experience was not as successful, due to Beethoven and not Haydn. Haydn was also one of the great innovators, inventing and developing three of the great forms of classical music, the symphony, the string quartet, and the piano trio. He was also extremely prolific throughout his life composing 104 symphonies and 83 string quartets and 42 piano trios, among many other works.

For most of his life Haydn worked as a court musician in a remote region of Hungary at the Esterhazy estate. He worked full time for the Esterhazy family from 1761 to 1790, when his main patron died. Beginning in 1790, Haydn began to travel extensively, including two very important visits to England which will be discussed shortly.

The London or Salomon Symphonies

The twelve symphonies (93-104) were the last that Haydn composed and resulted from two visits to London in the 1790’s, after we was freed from most of his obligations with the Esterhazy family, after the death of his great patron Nicolas Esterhazy in 1790. The music impresario Johann Peter Salomon invited Haydn to come to London on two trips to write and then conduct his symphonies with a large orchestra. The symphonies also sometimes are referred to as the Salomon symphonies. The twelve symphonies taken together represent the high point of Haydn’s symphonic writing. They are all four movement works and all but one begin with a slow introduction followed by a fast sonata form first movement. The sonata form is the most complex of the forms of classical era music. It may have been invented by Haydn and certainly reached maturity through his symphonies and those of Mozart. The form has three basic parts, an exposition of two main themes, a development of the themes, and a recapitulation of the exposition some important key changes. Often there is a slow introduction and coda at the end of the movement.

Haydn’s London symphonies are his most mature and advanced work and each one is a delight for the listener. The most famous is the Symphony 94 the “Surprise” which has a big surprise at the beginning of the slow second movement, a theme and variations form. Haydn had a great sense of musical humor which reappears throughout his many works. Half of the symphonies in the two sets (93-98 were written during his first London visit, while 99-104 were written as a result of his second visit) have names, and these tend to be the most famous. These include 94 “Surprise”, 95 “Miracle”, 100, “Military”, 101 “Clock”, 103 “Drumroll” and 104 “London” 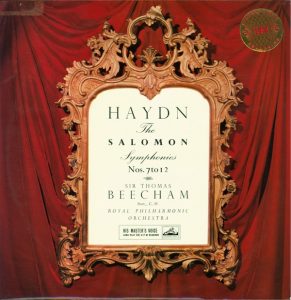 Perhaps the most famous set of the twelve symphonies was recorded by Sir Thomas Beecham for EMI. The first six symphonies were recorded in the mono era, while the second set were early stereo recordings. They were released by Capitol records in the US. The photo of the album is from one of the three records of the stereo EMI set (EMI ASD 339,340, 341). Notice that the description says Salomon Symphonies 7-12, indicating they are the last 6 of the twelve of those symphonies. Beecham conducts with great wit, and the Royal Philharmonic was his orchestra which he founded after World War II and quickly made it one of the top orchestras in London. It remained so until Beecham’s death in 1961. 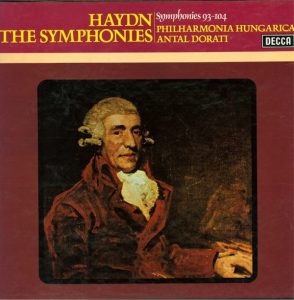 There are some other fine recordings of the 12 symphonies. Some are of the entire set, while others are of individual or a pair of symphonies. Eugen Jochum has a complete box set on DG. And Antal Dorati undertook mammoth first recording the entire 104 symphonies for Decca, of which the 12 London symphonies are in one six record box (Decca HDNJ-41-6). The Dorati Symphonies were also released in boxes on the bargain London Stereo Treasury Series in the US and later on CD, neither of which I have heard 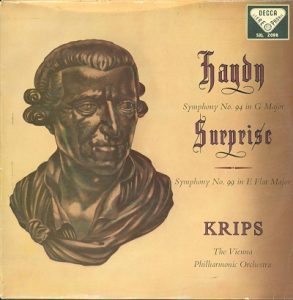 There are many recordings which include individual or pairs of the late Haydn symphonies. Karajan paired the last two Haydn symphonies with the last two Mozart symphonies in two albums done for Decca. The great Austrian conductor Joseph Krips has an early stereo album by Decca of Symphonies 99 and 104. I was fortunate to see Krips in the late 1960’s when he was music director of the San Francisco Symphony near the end of his career.

In 1779, Haydn received a new contract with the Esterhazy family which allowed him to work outside the household and also retain ownership of the works he composed. This led to a flood of new work for Haydn, including a commission from a French aristocrat in the mid 1780’s. The six symphonies are particularly full of wit and humor and are a great kick to listen to. Four of the six have names, including 82 “The Bear”, 83 ”The Hen” ,84 “In Nomine Domini”, and 86 “The Queen” named after Queen Marie Antoinette who especially like the symphony. Many of the names of Haydn’s symphonies came after the composer’s death.

There are several sets of the Paris Symphonies in my collection. Dorati’s is part of his complete series. The box containing the Paris symphonies also contains his symphonies 88-92 and Sinfonia Concertante (Decca HDNH-35-40). It is also in a box issued by Decca in the US on London Stereo Treasury. 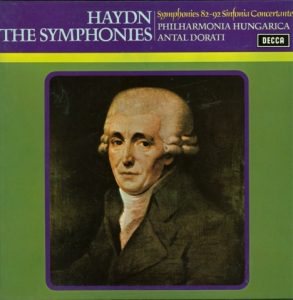 Another set of the Paris symphonies was issued on Decca in the early stereo era, conducted by Ernest Ansermet and his L’Orchestra de la Suisse Romande, based in Geneva. There are three separate albums, each with two symphonies. One advantage of the mature Haydn symphonies were that they were about 25 minutes long and two would fit nicely on the two sides of a long playing record. The Ansermet set was issued in the US in a 3 record box (London CS-2306). Later the symphonies were rereleased on the midpriced Decca SDD series in the UK and bargain London Stereo Treasury series in the US. 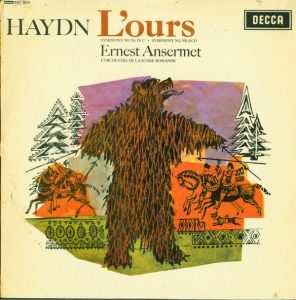 Leonard Bernstein recorded the Paris Symphonies for US Columbia (D3S769) in 1968, which received positive reviews. I have two other sets of the Paris symphonies, both on EMI. The Box set EMI SLS5065 with Daniel Barenboim conducting the English Chamber Orchestra relatively early in his conducting career, while he still was primarily known as a pianist. The second are three individual records conducted by Yehudi Menuhin with his Menuhin Festival Orchestra. I have to admit that I haven’t listened to these records in a long time, if ever.

The fact that many of Haydn’s symphonies have names, mostly not given by Haydn or even during his lifetime, gave record companies and concert promoters an easy marketing tool to differentiate those symphonies from other by Haydn and other composers. Neville Marriner and his Academy of St. Martins in the Fields chamber orchestra recorded a large number of these name symphonies in very fine performances on the Philips label. I was first introduced to a large number of these albums in a bargain box pressed in Italy. I then was able to find the same records on the original, slightly better, Dutch Philips pressings. The albums have a similar look with the same artist using the names as inspiration for the cover art. What is particularly useful is that listening to the name symphonies gives an easy way to sample the huge number of Haydn symphonies with the name symphonies spanning from early to late in Haydn’s output. 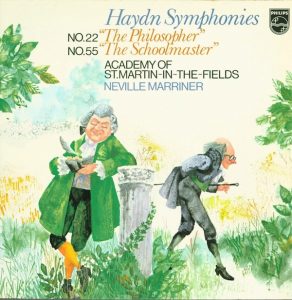 The first of the name symphonies is a series of three symphonies 6,7, and 8, written very early in Haydn’s position at Esterhazy. The names are respectively “Le Matin”, “Midi” and “Le Soir” or “Morning”, “Noon” and “Night”. The beginning of the Symphony 6 clearly depicts a sunrise, hence its name, while the others were given complementary names, without any strong programmatic references. The form of the three symphonies shows the very early stage of the development of the symphony, closer to the earlier concerto grosso of the baroque period. All three symphonies feature many instruments of the orchestra in virtuoso solo roles, something that is said to won over the players of the orchestra, since they often received bonuses for playing difficult solos. Jumping ahead, the Symphony 45 “Farewell” again displays Haydn’s sensitivity to his orchestra as well as his humor. The orchestra players at the summer palace at Esterhazy were forced by the nature of its remote location to live for long periods of time away from their families in Eisenstadt, a day’s journey away. As a result they complained to Haydn about their situation. Because of the royal hierarchy and the roles of musicians essentially as servants to the court, Haydn could only hint at the situation. He did so in the last movement of his 45th Symphony. As the movement progressed, the score indicates that one by one the musicians stop playing and snuff out the candle lighting their music. Those musicians would then walk off the stage. So by then of the piece there were only two musicians left, including Haydn and the concertmaster. The Prince got the message and the next day moved his court back to Eisenstadt.

Symphonies 48 “Maria Theresa” and 49 “La Passione” form a strongly contrasting pair. Symphony 48 was named after the Empress Maria Therese of Austro-Hungary (the mother of Marie Antoinette) and is a brilliant symphony in C major, with trumpets and tympani (some think those were added later, perhaps by Haydn). They make a festive symphony, one which also advances the development of the symphony. Symphony 49 is a dark composition in f minor. All the movements are in f minor except for the contrasting Trio in F major in the Minuet section. Its four movements are also slow, fast, slow, fast, an older musical form, sonata da Chiesa, not a standard symphony structure. It is part of Haydn’s “Sturm und Drang” symphonies.

The Marriner ASMF series of Name Symphonies on Philips that I have in my collection include:

In addition I would recommend the recording of the three early symphonies 6,7,8, Morning, Noon and Night on Turnabout TV 34150S.

Papa Haydn can justly be called the “papa of the symphony”.