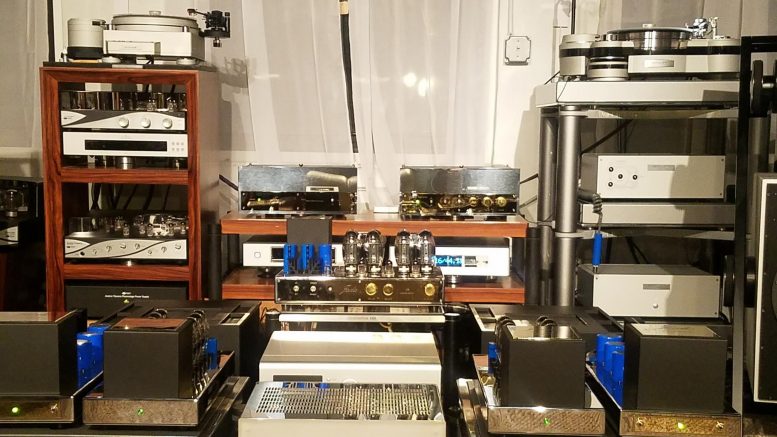 This was my second visit to Bob at Rhapsody’s. You can read about the first here.

Bob at Rhapsody audio is an old hand, in the past he himself has owned Vandersteen, Magnepans (3 pairs), Martin Logan (4 pairs), Wilson Audio (3 pairs), Infinity RS1B, Duntech Sovereign, Apogee from Slant six to Divas/Dax and everything in between, Avantgarde (many models), Sonus Faber Extreme. Over the years he has sold MBL and Goldmund in NYC and for years had MBL, Goldmund and Avantgarde as well as other lines, ie, Joseph Audio, Eggleston Works, Acapella and a bunch more.

At Bob’s, a couple of years ago I had heard the Magico  S1 mkII, S7 and he also had the S3 and S5II in the room

This time, Bob had the Magico M3 with the older, series 1 Wilson Alexandria looming large behind them. Apart from the Vitus, he had a Soulution integrated, and a Zanden. But the star of the show, sitting in the middle, was the 4-block Jadis 200 with the Jadis 2 box JP 80 which was Bob’s preferred choice to show off the M3s. 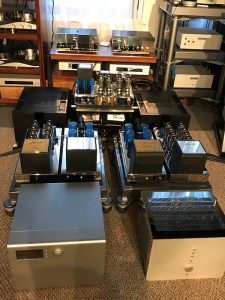 This was to be a complete Analog only show. Why? On one side sat the AF1 system – Techdas AF1 premium, Graham Phantom Elite, Zesto 12k phono, Koetsu Coralstone Platinum. All on CMS rack. On the other side sat the AF3 premium with the Graham Phantom (not Elite), a 4.6k Zesto phono, and the Lyra Etna. All on a wooden rack. 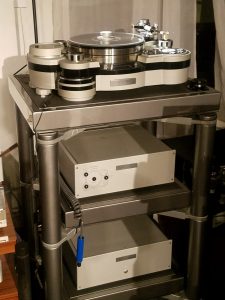 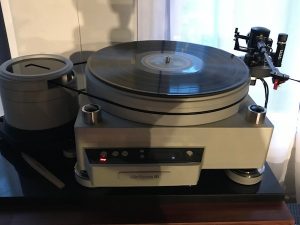 I had heard the M3s with Alieno hybrid and the Dagostino Momentums (report yet to be published as I want to investigate Alieno further) in another room. Bob’s room is one of the busiest rooms you can see – all the best trying to look for a spot to put down your bag – there is gear everywhere. But as I discussed with Marty the next day, it is surprising how he pulls off a good sound there. Whatever he has done with the room dimensions, treatment and tweaks, is working. Irrespective of the speaker he uses, he gets a large, transparent soundstage, clean sound, lack of boom with cones, ability to make the speakers disappear. 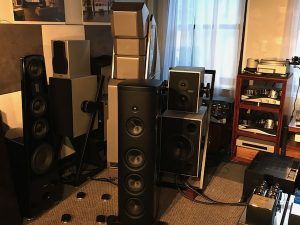 I started with the Magicos and the AF1 system. Then I moved to the AF3. Now, the lesser model of the Techdas with the lesser model of the Graham and the lesser model of the Zesto on a wooden rack, was holding its own, and in some ways, sounding better than the AF1 system! I put it down to solely the Lyra Etna and the Koetsu Coralstone. The Koetsu was not burned in, had barely 10 hours, but I know the Coralstone sound having heard it in 5 systems with a compare to the Atlas. I just don’t like it. I owned one and sold it off. It is fuzzy, rolled off, cannot resolve orchestra, and I am yet to be convinced by the midrange (I have liked the non-coralstone Koetsu carts I heard on the Fidelity research at Shakti’s). The LP where we changed over from the AF1 to the AF3 was the Speakers Corner Argenta Espana (one of the finest of Decca recordings by Kenneth Wilkinson in Kingsway Hall, the original can cost 400 quid), and the Etna just opened up the stage, brought the Magicos to life, and the music was completely transparent and see through, natural energy, great tone, the speakers had disappeared. Look guys, I am sure this AF1 premium can sound better…I have heard the AF1 sound much better, but if the cart, whether due to me not liking Koetsu, lack of burn in, or arm mismatch is making so much of a difference, those of you on the AF3 premium budget should get the AF3 premium. And this was on a wooden rackThe AF3 unlike its bigger brother does not have suspension, so add suspension under it and it can sound much better.

I know that the Zesto 1.2 is a giant killer – it had sounded better than the Allnic h3000 with its stock recti (not with the recti rolled) at a much lower price. The strange thing was that intuitively I would not have guessed the Jadis would be able to drive the M3, but this was the best I have heard the Magicos sound. And this is the most musical I have heard Lyra sound – no one doubts it can do speed, dynamics, and transients, but while these qualities were showing at their best, enhanced by the similar characteristics of the Magico, the Jadis was adding the required musicality. And this Jadis is not bloomy or colored, but with the Etna, Bob seemed to have got it just right.

The RCA Red Seal Rubinstein Emperor tone flowed through, the piano more integrated through the drivers than the Wilsons. I played the Analog Productions Scheherazade, Melodiya Winterreise, Decca ED2 Ricci’s Lalo Espagnole, Decca reissue Oistrakh Bruch,  a Tacet.de Beethoven 5th (tube mastered Polish LP), and I was not hearing the Magicos. Music was coming through space.

Everytime I have sat in front of a Jadis, the musicality hits some natural corner of my brain, and I start enjoying the system. Plus, these amps had the stock valves, and Bob (or the user), can get them to sound better by rolling valves. Having had the JA 100 in my system, I can confirm they sound more involving, dimensional, and do air and tone and decay better on top of shun mooks.

I heard the previous S5 MkII with Kondo Kagura and the m1000 pre, and the Vitus was better. The Jadis compares to the Vitus, those who like valves will  prefer the Jadis. It will sound better than the Kondo on cones, I had the NAT Magnetostat SE and the NAT Magma SE next to it on the Verity Leonore at home and the Jadis imo were marginally better. I am anti-SETs on cones, and good push pulls like Jadis or quality SS like Vitus work better on such speakers. Someone needs to compare this to the AR 250 SE

Then, Bob pulled out a surprise. He took out these new open baffle speakers called Alta Audio, the designer stays not far from Bob and has recently introduced them to him. The Alta was more natural than the M3s, as was heard on instrument tones and Winterreise vocals. It was more relaxed, the bass breathed more like a panel. Yet, when we went back to the M3s, the transients, speed, energy, and the soaring transparent open end made it enjoyable on some music. If you put on a violin concerto like Oistrakh Bruch, you notice that the speaker breathes more as the orchestra opens up.

I really liked the Alta Audio; before leaving, I did tell Bob about the cupping of the vocals in the highs that I noticed, and within one hour had heard back from him – the speaker had been voiced on a 1000w SS, and while playing it on the Jadis, the highs became soft. The designer has agreed to make the kit adjustable for SS or tubes easily. That’s Bob. You can sit with him and give feedback and he works on that immediately. With the tweak, imo, they can exceed the Magicos, and might be more room friendly in smaller rooms.

You see the Altas next to the Magico in the above pic, but here is a better picture from their website 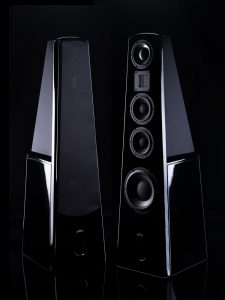 The key takeaway from this session was how good the AF3 is. On the forums some expressed that it might not have sufficient bass – this was based on show demos. I think such fears are unfounded and it has the dynamics and drive and bass that a Techdas lover who cannot afford the AF1 would want. The other takeaway was that Jadis 200 can actually drive speakers like Magicos with the Jadis magic, and the match between Etna, Jadis, and Magico. But the big find might be Alta Audio. The Alta model is their top of the line Hestia, and I was later to find out it is a Dipolito design, which is a dipole in a D’appolito configuration, with monopole sub bass and ribbon tweeter. It is priced at 33k and if you are in the market for speakers this size and budget, you should audition this. Don’t expect the scale and weight of giant cones the size of the Alexandria, that is not the market, but for speakers at a Magico M3 size, and for those kinds of rooms, this is an excellent alternative.

The Goldmund Satya speakers with the AF1 sounded really good, and for someone who is into a turnkey solution, I can see why this can be a plug and play enjoyable set up. ALF on WBF has sold off his audiophile system and gone Goldmund

I had planned to go back to listen to the M3s on Vitus, but unfortunately there was a clash in schedule. That would have completed the circle of Push Pull or a quality SS to drive such speakers.

All Enklein David cables (signal cables, except Tara Labs GrandMaster  Evolution PC’s on the amps and on the Satyas )