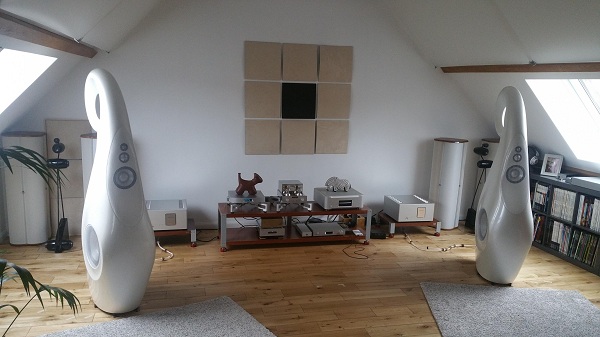 I visited Joel, a 6 moons reviewer, and editor of his own magazine http://www.audiophile-magazine.com/ – his room is a square 7m * 7m, with a sloping roof that reflects a lot from one slope to the other.

However, I could hear no room problems because with the help of an acoustician Joel has tamed the room RT to 0.3sec, for his Vivd Giya G1, which are tough to set up.

But what impressed me was that he has done it using material that blends into the decor and does not intrude into the room. He has been through GIK, vicoustic and other panels, and now settled on PYT audio and another German brand (Microsorber) for absorption. He has two DAADs in either corner, which are the only intrusive elements in the entire room (apart from the G1s, of course!)

What you see below are the German panels used as absorbers. These have been put up parallel to the ceilings, are thin perforated panels, with space between them, and can be colored or painted/imprinted on to suit the room decor. 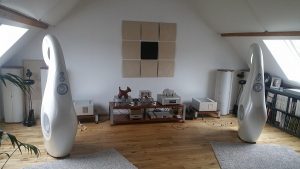 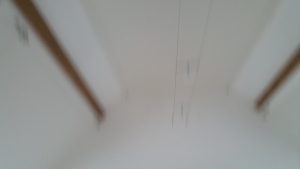 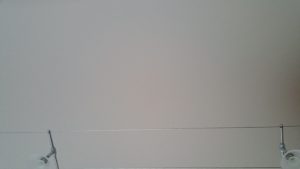 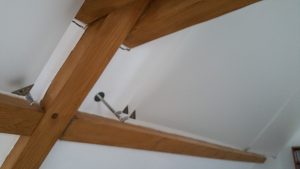 On the last pic, I have shown the gap between the panel and the ceiling so that one can differentiate, but if you were in the room in person, you just would not notice these panels unless you looked at that gap.

The PYT panels have also been reviewed in Mono and Stereo http://www.monoandstereo.com/2015/04…ls-review.html

When the acoustic energy or sound wave goes through the perforations, it is transformed into heat through friction, significantly reducing reverberation time and sound level. The efficiency of Microsorber films can be reinforced using two layers separated by 3 cm as in Joel’s case. It is also used in industrial/commercial solutions, an example of what has been achieved in the main conference room of the French central bank :
http://microsorber.net/uk/references…ce-auditorium/

From Joel: “The French distributor has installed one layer of microsorber directly on the glass door of his shop. The left side was treated and the right side not. When you stand talking in front of each side of this glass door, the difference is impressive…

For price information, 90 € is for film only.
You should forecast circa € 150 for whole set (fixing shafts and brackets + laying included).
Application is rather tricky as the film tension between the brackets calls for ultra precise measurements.
DIY could then be more expensive taking into account the lost sheets, compared to the application made by a professional.” 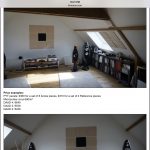