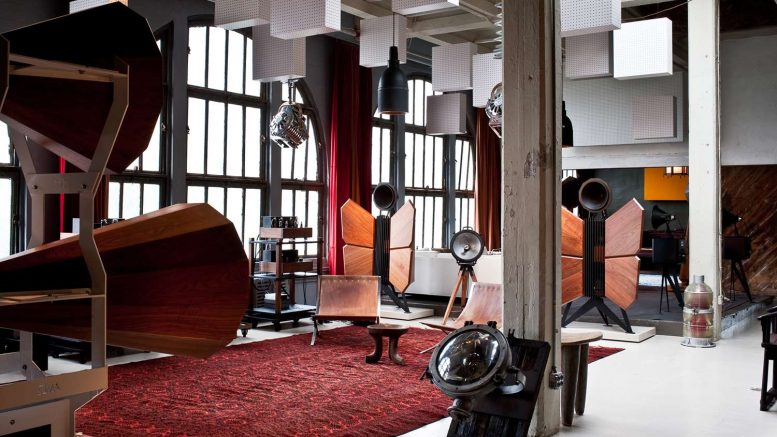 The main objective of my trip to the US was to visit Oswald Mills (OMA). Were these another horn manufacturer that just did beautiful stuff that sounded wrong?

My audio buddy Al, who has the four tower Infinity and an all digital system, joined me for this. All part of my noble cause to expose people to quality horns and analog. First up, what greeted us was this T-Rex sized 300k USD horn, the Imperia, with 21 inch Neodymium driver subs crossing over at 100 Hz, and a fieldcoil compression driver. 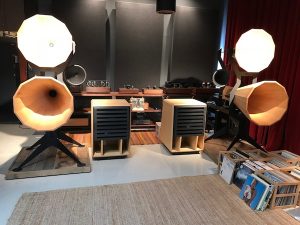 These had a nice looking power supply 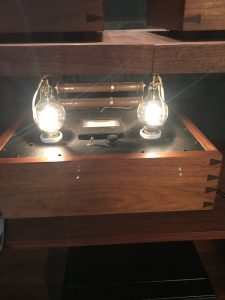 At the back was the most gorgeous TT I have seen, based on the Technics Sp10 motor, with a giant slate plinth, Schroeder Reference+Miyajima Madake 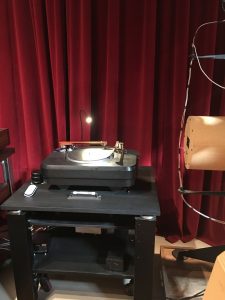 The amps being used were GM70, though he had others 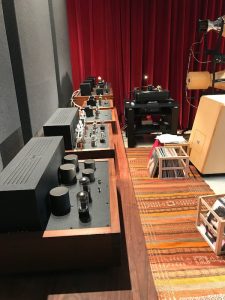 The other two big horns in the room were the 110ish k butterfly looking Monarch horns in Walnut, and the first speaker that OMA built 9 years ago with dried ash, named AC1, using a vintage compression driver made by RCA for their movie horns, and a horn loaded ribbon tweeter.

All other speakers apart from this one were played with the OMA Anatase, a 80lbs slate TT based on the Lenco motor with graphite platter, a Schroeder CB, and the Miyajima Kansui. 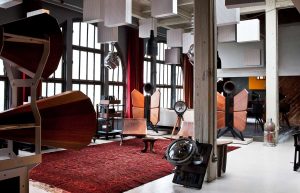 Oswald Mill’s first horn built 10 years ago is below: 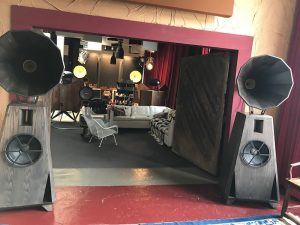 Before I get to the sonics of those, the second speaker I heard was the most interesting you will ever see. Built in cast iron horn and old field coil drivers, this speaker is fantastic on dynamics and tone of strings such as plucked guitars, violin, and the top end. And these dynamics are with the Miyajima, not with a Lyra. It does not have the midbass and bottom end, and can get a harsh, but possibly backed by walls in the right room can sound more complete. Regardless, if you have the money to collect art and are looking for a visual statement that also is very musical, this is it. 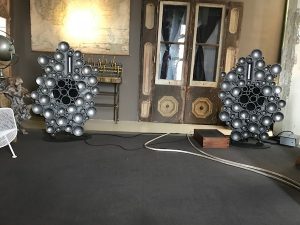 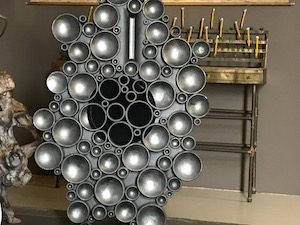 Going back to the wooden horns, the Imperia was gigantic on amplified, large scale music. Muddy Waters 45 rpm Analog Productions was fantastic, as was jazz. It did a larger than life sound, imaging huge and holographic like a stadium band, with loads of bass, but at that distance, crossovers could be heard. Also, the tone of the Monarch was more natural on my classical LPs. 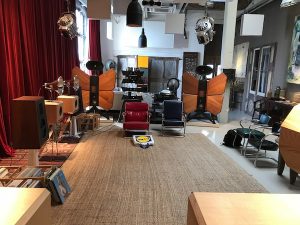 The Monarch is possibly the best and the most complete speaker I have heard. There. That’s the summary statement. It brings out the best of both panels and horns, giving you flow and tone coupled with the openness at the top. On Piano we played Rubinstein Emperor Living Stereo, Beethoven 45 rpm Apassionata, a fantastic piano audiophile recording, Decca Original edition 2 Ruggiero Ricci Espagnole, Scheherazade Reiner Analog Productions 4th movement, Solti’s Beethoven 9th 4th movement on Decca, and as I was searching for Peter Schreier’s Winterreise Melodiya (which I had misplaced), by some sheer coincidence Jon Weiss took out his own Winterreise, one I was not familiar with. No, he had no idea I was looking for it. I have heard the Hans Hotter/Gerald Moore and Deitrich Fisher Dieskau, and have been to a couple of live ones with Ian Bostridge as well as Roderick Williams/Iain Burnside. I had not heard his LP before, regardless, it sounded great. Al and Jon also played some amplified and Jazz.

If you can afford these, you don’t need to buy two speakers, like an apogee and a horn. You can have one system – this. Mids, vocals, opera, piano, orchestral. All done. No need for an SS amp and a triode amp to get the best of both worlds. Get this. And, idlers are where it’s at. Idlers gets it. The music is just right. Maybe the excitement is making me temporarily extreme, but you get what I want to convey.

I forgot to take a pic, here is one from their website 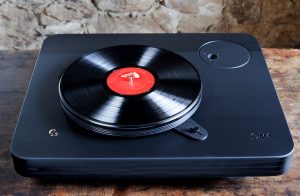 Also, I have previously not liked Miyajima Madake at all. I used to call it Muddy-ke, because it muddied the sound, colored it, and did not have sufficient extension. I compared it with Zyx Uni II on the FR 64s on the Schopper 124, and at Munich, with the Madake on the Bergmann into the Thrax the analog sounded less good that the Cessaro one box CD/pre/processor in that system. In fact, I wrote in my email before the visit if we could have the Lyra instead, which Jon also represents. So I had been initially disappointed to see the Miyajima. But Jon, on the Schroeder CB, has a put a rotating headshell similar to the RS Labs A1, which, according to him, makes this work like a parallel tracker. Whatever Jon has done, it rocks. This is a chef who can make the tastiest of dishes from choosing ingredients carefully (and present them in super Michelin star fashion too). Would a Zyx, Jan Allaerts, or Opus sound better? Possibly. I don’t care. This is perfect. PTP moved from slate to the Corian. You will find a lot of discussions online if slate is good or not. You can join those online discussions, or you can choose to go listen here.

I thought of calling the Monarch the best speakers I heard. Just stopped short, because “Best” requires a lot of responsibility, and there are some caveats:

Going back to the other speakers, we heard the two mini ones. Both Al and I did not like the standamount with the folded ribbon. But the smallest, the one with the Aluminum horn, was excellent. Yes, at times it could be a bit cupped on vocals, but as a tiny standamount, he had the bass and crossovers right. Retail is 27k. This is a pic from their site 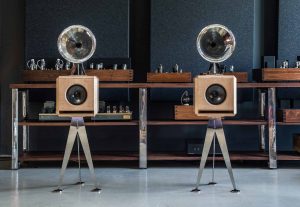 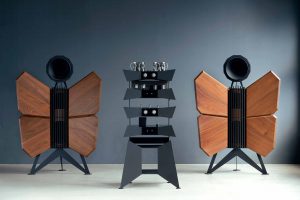 That aside, before leaving I heard two mono records on the Tourmaline with an unique customized Schroeder arm and the Miyajima mono (this combination is much cheaper than the Reference plus Madake that sits on the stereo side of the TT). The Brahms Violin Concerto by Milstein on the Capitol mono LP was the most natural performance I heard there that day. This is not different to when I heard the Miyajima Mono outdo the Zyx Uni II and the AN IO on some stereo records on another system. 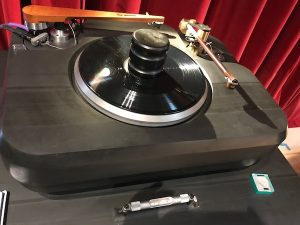 Chatting with Jon, he knows his horns, from WE and all the theatre horns, the manufacturers, bespoke ones I have met on my journey, his carts and his analog, and he has brought together ideas from the various expertise that exists in the market leading to this. You can see learnings from Schroeder, Krebs, Bill Woods, RS Labs, the best designs, all amalgamated here.

He did mention that back in the day, each cinema had its own choice of WE, RCA, etc…and people would go to different theatres and experience different sound. The industry got together, decided to standardize, and RCA won. He has built his horns on the back of RCA.

Speakers aside, this is by far the highest WAF room you will be in. I am a poor photographer, but take my word for it, each corner of his warehouse, from the kitchen to the bathroom, the wine racks, the pots to store vegetables, the bed, every nook and corner is the best I have seen. In every corner you can see an obsession for art and perfection. If you have the money, just buy the whole damn place. And add Shun Mooks. 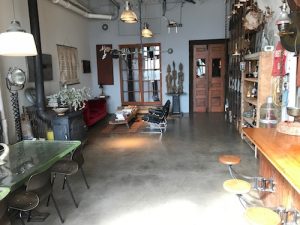 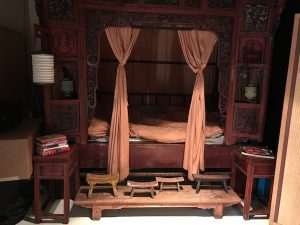 Be the first to comment on "Oswald Mills (OMA)"