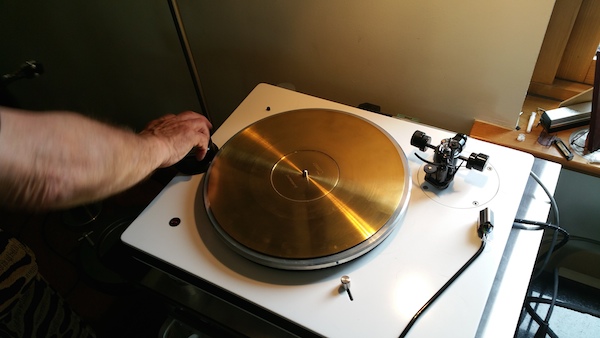 Why did people trade down from the TW Acustic Raven and Verdier to the PTP Lenco? Why did Salvatore use the Nantais Lenco as a reference for years? Why is PTP Art Dudley’s favorite TT?

My first trip started with a visit to Geneva, where I heard the Nantais Lenco Mk2. This was with expensive Audio Consulting electronics which are very clean, transparent, nice sounding that had impressed me when I had the Audio Consulting stack with Stenheim Alumine 5 at Munich in 2016 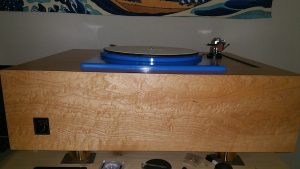 I was not bowled over by the Nantais (compared to the a low cost digital he had made in Switzerland), and had a trip scheduled for the PTP.  The Nantais system had been clean sounding and large.

So I woke up at 3.30am to travel to Scotland, where I listened to 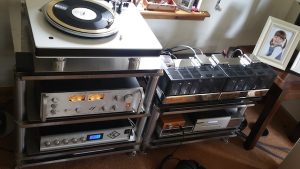 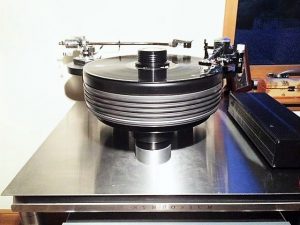 The rest of the system was comprised of Zu Droids, EAR 912 phono, EAR pre, and 509 amps 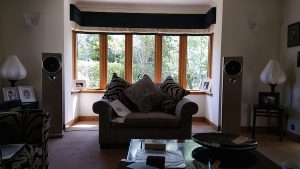 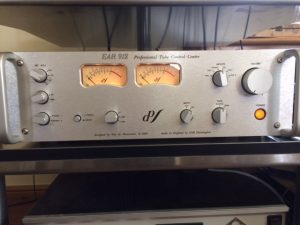 Russell has been setting up analog since 1980, and is extremely particular about using various methods of alignment using Feickert and mint LP protractors to set up the carts to the nth degree. He prefers the 3012R to the M212, loves the arm, the flexibility and ease in balancing it. He has had the Moerch and the Graham on the same TT with the Zyx before, and he and his wife concluded that the difference was negligible and the tonearm cables made more of a difference between those two arms. The same dealer/distributor, Martin of Audio Reference, deals in both (he was the one who introduced me to Shun Mooks).

We started with some digital to get a feel of the system. As soon as we moved to the Dais with the SPU a95, I found myself surprised to hear the Zus sound so good, my last experience with the Zus had shown no soundstage and air, but this system had that. There was a good flow, and room fill. There was soundstaging behind the speakers, upto the window.

The Hana is a low priced 500 quid cartridge that Russell was setting up for a friend, and I have heard it before at the Windsor show. It is like the Art 9, quite a high VFM cart that does good detail and sounds neutral. Like the Art 9, a cart that most audiophiles will enjoy unless they get the itch to compare with some higher priced MCs from Zyx, Ortofon, or Lyra. The SPU a95 though was better than the Hana, and with the SPU I found myself highly involved and enjoying the system. 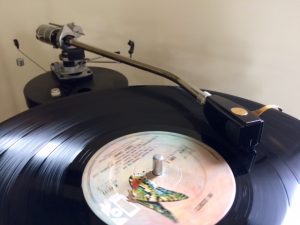 I have heard the SPU a85 before and while I will compare the a85 to a95 soon, the SPU does not exactly tick hifi boxes. It is rich, has an excellent body, possibly the best, and is fantastic at the tone of individual instruments on brass and piano. It does not have the higher end of a Lyra, Ortofon MC 95, Zyx or Colibri. Yet, unlike with the Koetsu, I do not miss it. It is also not the most resolving. But you will find it tough to get something that can flow like the SPU, especially with the piano. Keep in mind that the SPUs I have heard have always been in SET systems.

The SPU a85 had seen off a Benz Ruby and a Clearaudio Insider Wood in that system on the Schick arm.

After the Dais, we moved on to the Lenco. It was easy to set up and came to life instantly. As I started listening after some warm up, I heard much more drive, bass, and large soundstage. However, I was not getting the musical feel that I got with the Dais. It kind of felt like what belt drive fans describe DDs to be on the forums – drive, bass, dynamics, but less feel. I thought maybe the Zyx 4d was not as good as the Uni II and the Uni Premium, and suggested we move to the Benz.

Russell said fine, did some changes, and sat back down. I said, well, not much difference, but this sounds more musical. I am getting a feel, possibly through decay. He said, I haven’t changed the cartridge. That surprised me – had he blind tested me into thinking that there was a change when there wasn’t? I was sure there was a change, so I asked him if he tweaked the SRA or the VTA. He said “No, I added the gun metal platter”. This gun metal platter from Puresound, for 250 quid, he explained, does not work well with the Dais but is known to be good for idlers. 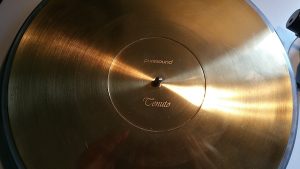 So we sat back down to listen, and each of the LPs was more involving, had more of a complete picture from top to botton, and I had begun to like the Lenco more than the Dais. As we got on to Scheherazade and Emperor, the soundstage, drive, and dynamics were seriously as explosive as any TT I had heard, except maybe Techdas. This idler was rocking! Maybe it is not the most nuanced, and a Kronos and some high end TTs might layer better, but there was nothing that I wanted while listening to this. With the gun metal the involvement was all there. The soundstage was wide, back, and filled the room. Extremely immersive.

I then took out my Stein Carbon Signature mat. At Munich, where Holger Stein had let us AB it, it had added bass, mid bass, more layering, more soundstage. Without it, the sound seemed flatter and thinner in the midbass. As soon as we put it in, the positives were all there. I checked for the tone, if there were any detrimental effects, but there were none. The only thing was, it was slightly muddying the midbass. Russell seemed to think that yes, if we raise the LP in height, it would change the bass. However, I remember at Munich, Jazzhead and I had tried another one of Holger Stein’s mat and that wasn’t anywhere as effective, so there’s more to this. Later, we would find that the mat on the Dais did not produce this muddyiness effect, so I think it can be gotten rid of on the PTP by slightly adjusting the arm.

Benz vs Zyx 4d After that we moved to the Benz LPS. The Benz had 10 db gain, the Zyx IIRC 30, and loading of Benz was much higher than of Zyx, so the pre was adding a lot to the Zyx. The Benz had the air and space to match, but I found the Zyx much more nuanced on the Piano and the Violin, and generally preferred it overall. This is the 3rd Zyx cartridge I have liked, following the Universe Premium and the Uni II – so that’s 3/3.

Dais vs PTP: Anyway, now that I had preferred the Lenco, we put the Dais back to confirm. As I again started listening to the Dais, yes, the Lenco did have greater bass, drive, and stage – but the Dais is a great TT too, extremely musical. The Dais is a bit more mid-hall, stays back giving the perspective of watching the performers from just back of centre, while the Lenco paints a larger than life picture – it floods the room, sideways, backward, and forward, and is highly immersive, and exciting. I have compared the Dais before to the Caeles prototype, and there too it relatively slammed less and was more laid back. But at just over 5k GBP, it too is a bargain. Never seen it on the used market though. Both the TTs allow for multiple arms. Another trusted friend preferred it the Dais to the SME 20/3

True, I did not have common arms and carts across, but we compared two carts on each, so there were some common attributes despite the cart being used. And the delta in bass, dynamics, and drive and explosiveness of the Lenco was something else

Weaknesses can only be, maybe some might not like that most of the their LPs will sound big and huge. It won’t give a mid-hall presentation if that’s what you want, at least not as compared here. Still a no-brainer

What Art Dudley says here,  in the Idler Wild para section half down the page, is what I heard

It was generous, fantastically dynamic and tonally rich without artificial fattening. Even though listening in the sweet spot was very enjoyable, every other spot in the room was just as pleasant. The music was everywhere, soundstaged properly if one wanted be in the sweet spot but just as enveloping elsewhere. 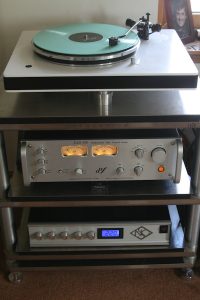