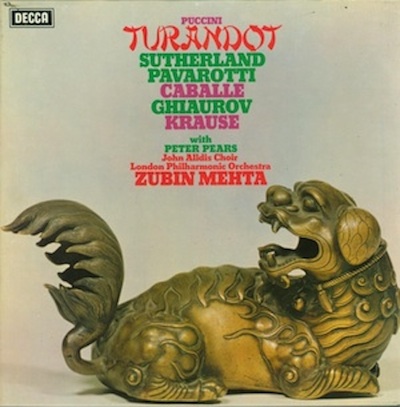 Turandot was Puccini’s last opera, left incomplete at his death. All that was missing was the last part of the last act and there were enough sketches for the opera to be completed by Franco Alfano. Famously, at its premiere, conducted by Arturo Toscanini, at the age of 59 (30 years after conducting the premiere of La Boheme), Toscanini stopped the performance at the point where Puccini had died, saying “Here the opera ends, left incomplete by the death of the maestro.” Subsequent performances have used the complete version. Puccini uses many Chinese themes woven into the music and the Chinese government banned performances for many years, claiming the story gave an unfavorable portrayal of the Chinese people. 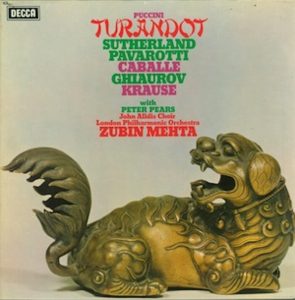 There is less controversy about the best performance, both artistically and sonically. My and the consensus favorite is the Decca recording conducted by Zubin Mehta, with Joan Sutherland as the icy princess Turandot, Luciano Pavarotti as the Calaf trying to win her, and Monserrat Caballe as the slave girl Liu, who gives her life to protect the Calaf. The recording was done in 1972, with Kenneth “Wilkie” Wilkinson leading the engineering team. The sonics of this recording are stunning, a TAS Super Disc. Pavarotti, famously took the final act aria “Nessun dorma” as his signature theme song. The last lines of the aria are “Vincero, Vincero” – I will win.  Pavarotti made this aria famous in the concert with two other tenors (Placido Domingo and Jose Carerras) on the eve of the World Cup final in Rome in July, 1990.

The plot of Turandot is a reworking of an old story.  The hero has to answer correctly three questions. If he does, he gets the girl, if he doesn’t he dies. After answering the three questions correctly and winning the princess, there is one more big hurdle.  For some unknown reason, the hero, the Calaf, agrees to one more condition. If the princess can find out his name, then he agrees to not marry her and to die.  When the princess is desperately trying to find the name of the Calaf, she orders that all the citizens of Peking stay awake to help in the search and everyone will die if the name is not found. The Calaf then sings “No one sleeps” – “Nessun dorma”.  The princess captures the slave girl (who is also in love with the Calaf) and tortures her to reveal his name.  She kills herself without revealing his name.  Finally, when the Calaf and Princess are together alone, he reveals his name to her.  She is overtaken by love for him. So when the climactic moment of the opera takes place, the Princess says “His name is Love!” The crowd cheers and the curtain falls.  So a happy ending, girl does get boy, without dying, but another girl does die. 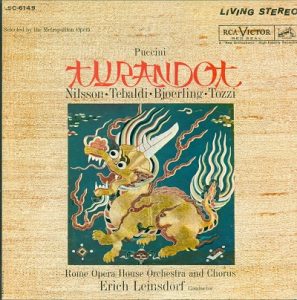 One of the early stereo Turandot’s is the recording released in 1960 done by RCA (RCA LSC-6149) done in Rome, with a great cast. Erich Leinsdorf conducted and Birgit Nilsson, the reigning Wagnerian dramatic soprano of that time was the princess Turandot.  Renata Tebaldi, the famed soprano was Liu, the slave girl, and the great Swedish tenor Jussi Bjorling sang the Calaf.  The producer/engineer team was Richard Mohr and Lewis Layton, responsible for many of the great RCA Living Stereo albums of that time.  It was later released on a hybrid SACD/CD in 2006.

In 1998, after the Chinese government had a change of heart, a lavish live presentation of Turandot was staged in Beijing, outdoors, directed by Zhang Yimou, who later staged the opening and closing ceremonies of the 2008 Beijing Olympics. Again, Zubin Mehta was the conductor, but with a lesser cast than his Decca recording of 25 years earlier. 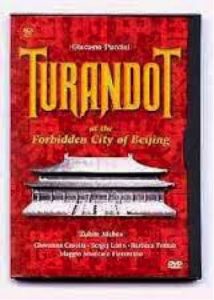