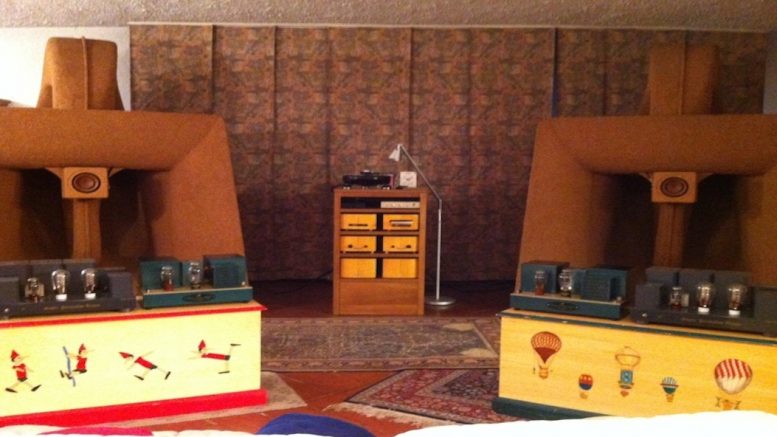 I visited Pietro again a year after my first visit three years ago, and another two years ago, he is now a Goldmund distributor and has added the Prologue to his collection of Apologue, Yamamura, Vivid G1, and Montagna. I have rewritten my posts

Pietro on the Whatsbestforum is Pepe57. Pietro is not very active on the forum, but has been an active audiophile for the past 50 years.

Since then, his system has changed, and he has set up the prefect system – which is multiple systems each with a different presentation s

His 5th system is Vivid Giya G1 with Halcro, which I was unable to get a listen to as it’s on his lakehouse.

A few weeks after visiting Gian, Carlo, and Marco, I visited Pietro again. 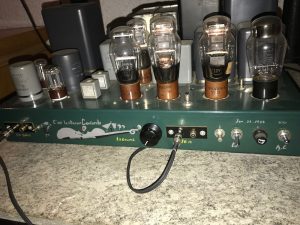 And finally, we jump to the Yamamura, my favorite amp-speaker system

His top system, which he has set up more for Jazz and small ensemble classical, is a GPA Monaco 1.0 with Graham Phantom II and Zyx Diamond G, FMA 122 phono, going into Yamamura electronics and cables with Yamamura horns

When I first visited Pietro three years ago, his CD player with the Yamamura was not working. Then I had just started auditioning with LPs and did not carry many, and had a short time to listen to 5 systems. So I hurried up on the Yamamura, thought they were ok, and moved on. Next year, I came specifically to hear the Yamamura, the system was warmed up, and I loved the speakers – I titled this post as the best horns in the world!

Now, I came a year again, more wise due to recordings courtesy the General. I started listening to the system, and it reminded me of the first visit. 30 mins in, and my soul was melting like in the second visit. I asked Pietro, does this take 30 mins to warm up? He said yes.

Well, all systems need time to warm up. What is this about this system that causes the BIGGEST delta I have heard due to warm up – the thing that takes it from ok to the best. The answer is that this has the largest insight into the smallest inflections and microdynamic shifts. Any shift in music, you hear it with impact. You have to hear this to understand this.

What also stood out how, even at low volumes, they fill up the room, there is music everywhere, and you get low level details. There is immediacy and a musicality that can be heard in a very relaxing fashion, lounging or walking around

I have never heard bass trombone and tuba like with the Yamamuras. The midbass and bass is just amazing, in this seamless, crossoverless speaker. The other thing this system is the best at, is the swell of the music, the bloom, of even the smallest details. As music rises and falls, you can hear the system breathing. One of my favourites for this breathing effect is Bydlo, from Pictures at an Exhibition. The Yams seem to have higher resolution and extension than more vintage horns.

The Yamamura Dionisio have evolved over the models and Pietro has the top model, made out of fibreglass, covered with thick cork. Some of the older ones had copper. Be Yamamura stayed at Pietro’s for a few weeks to adjust the shortcomings in the previous models. This model of the Yamamura Dionisio has improved low frequencies by the back horn that is about 18 feet long. The declared efficency is 96 dB/W/meter maximum power they can support 40 watts. With the “big mouth” (there is also a smaller one) of 6 feet x 6 feet the lowest frequency they can reproduce (declared) 27 Hertz at – 2 dB

I have recently been hearing many comparisons on performances on some great violinists and pianists. However, I am not qualified to decide who is better – the way I judge is I put on the LP, and if it is a mix of a good recording, where the orchestra and the soloist sound are presented more like real life, and if I enjoy the performance musically, I take it. However, when Pietro put on a Heifetz Patigorsky concert on a simple RCA Red Seal SB, I realized why Heifetz was the greatest – every weight shift of the hand, the control, all that adds to musicality, was audible so clearly,  unlike on any system I have heard. We could not take off my Rostropovich Richter Beethoven Sonatas on Philips ED2. On all piano that we heard, the pedals, the left, right hand, every shift was the most audible. Sure, pianists can always analyze this – I cannot. But here, you hear the musical lines these pedals and hands are making, and they take you away. Brass, Piano, Cello, due to the brilliant lack of crossover integration, are by far the best I have heard on any system. The soundstage needless to say is large – what would you expect from a 6×6 feet mouth, and 7.5 to 8.5 feet tall speakers? The slightest shift in air causes orgasmic pleasure, and there is zero break or misalignment with the high frequencies. This is genius at its best.

This is the best room I have heard along with Mike’s. Mike’s system is built on a room down basis – it is better rounded, can play classical, rock, electronic and audiophile equally easily, based on fantastic acoustics, a very low noise floor, and an extremely keen and hardworking and sensible audiophile perfecting the integration of the various components and tweaks over 40 years 5 hours a day.

Pietro’s system is not based on the room, but on the speaker and the amplification causing magic. It was built by a genius, who stayed at Pietro’s place to fine tune the speaker to eradicate shortcomings in the previous models. Pietro has tried various amps with it, from Kondo Souga and Kageki to Shindo and other SETs – he owns the top of the line Shindo single ended WE 300b (which, by the way, is up for sale) with NOS WE 300b valves. However, he has consistently preferred the Yamamura amplification, which is a SS current amplification. His system is set up for jazz and classical, not rock. There are some things his system does better, some Mike’s. I could write a 1000 words on the speakers but I will simply sum up with that it is worth flying here only to listen to the the tone, the cello, the piano, the brass. 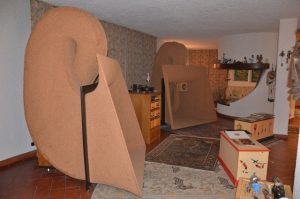 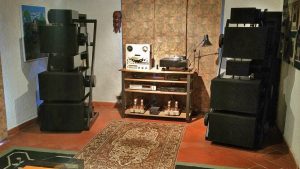 His second system more for rock and big symphony, is comprised of the Goldmund Apologue. I have heard it before driven by 25w Kondo Gakuon 845s and Versa dynamics TT with a Kondo cart. The TT is amazing…tap it while it’s playing and no jumps, such is the suspension. Goldmund Apologue are 100 db, built like a tank, chassis made to kill vibrations. I have written more about this TT along with the linear trackers in Gian’s visit. This time the table had the Clearaudio Goldfinger Statement V2 installed, and instead of Kondo was playing through the top Goldmund phono, pre, and power amp. 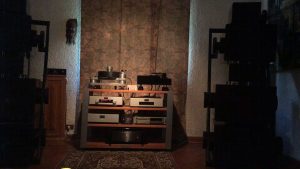 Interestingly Frank, another audiophile I visited in Oxford with the Tune audio Anima also has the Goldmund Epilogue, smaller version of the Apologue, and said that the other TT he considered before buying his Goldmund reference was the Versa dynamics 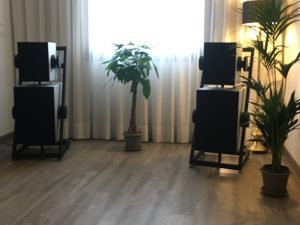 The following is from my first visit

We then went over to his neighbour, who has the JBL Pro 4520 with Project Sphinx hybrid amp (the same that I heard on Apogee full range and Acoustat 2 + 2). Imagine two such audiophiles a block from each other.

Unfortunately while we heard the digital, his Basis TT with Air tangent arm and Clearaudio Reference was not working, nor was his tape player…oh well, next time. 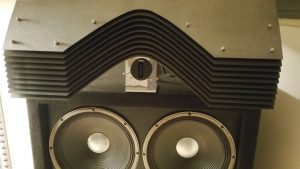