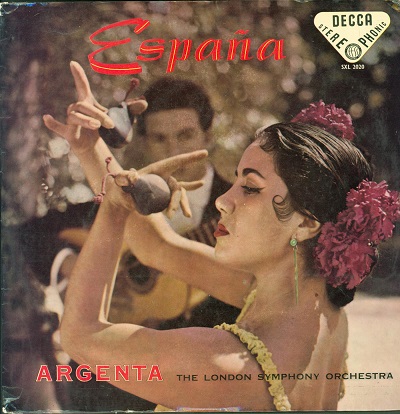 First, what is Spanish (or German, or Italian, or American, etc) classical music. Before sometime in the 19th Century, it was quite difficult to associate a nationality with a western composer. Listen to Bach and Vivaldi. Can you tell which was the German and which was the Italian? Or a Mozart opera written in Italian vs. a Rossini opera written in Italian. By the end of the 19th century it was clear that Dvorak was writing distinctly Czech (actually Bohemian) music, while Mussorgsky was writing Russian music. So something had clearly changed, the development of nationalistic schools of composers. 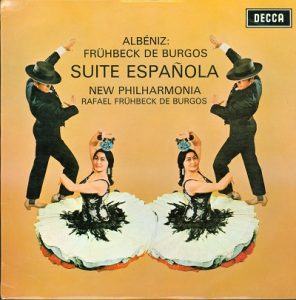 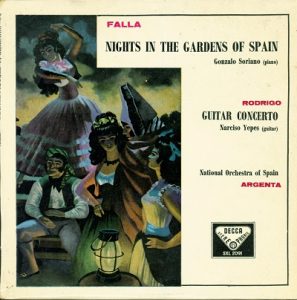 The Spanish composers that I think of who write Spanish music are mainly three – the early 20th century triumvirate of Isaac Albeniz, Manuel de Falla, and Enrique Granados. Many can think of Albeniz’s Iberia, and Falla’s Ritual Fire Dance, Nights in the Gardens of Spain and Three Cornered Hat and Granados’ Goyescas. I think of sharp rhythms and castenets, flamenco music.  To that I would add a more contemporary composer, Joaquin Rodrigo, whose guitar Concierto de Aranjuez is his most famous piece, and the most popular guitar concerto of all time. Pictured above are two great Decca recordings. The first is comprised of pieces by Albeniz, orchestrated and conducted by the Spanish conductor Rafael Fruhbeck de Burgos. (Decca SXL-6355). The engineer was Kenneth “Wilkie” Wilkinson.  The second album is a TAS Superdisc, containing both the Rodrigo Concierto de Aranjuez and the Falla Nights in the Gardens of Spain. (Decca SXL-2091)  It was licensed from Spanish Alhambra records and conducted by Ataulfo Argenta.

However, when I think of pieces of Spanish music, my mind is moved toward other composers. One of my favorite Spanish titled pieces is Capriccio Espagnole, by Rimsky-Korsakoff, a Russian. But then, I am led to a series of what I think are the great Spanish pieces, all by French composers: Debussy, Ravel, Massenet, Bizet and Chabrier. 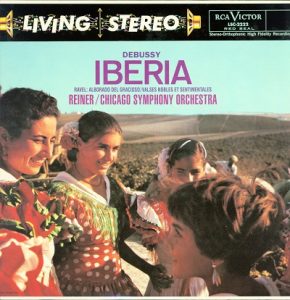 One of my favorite Spanish pieces is Iberia, the second of three Images for Orchestra by Debussy. Although it is part of a larger three part piece it, Iberia itself is in three parts and often programmed in concerts standing alone. The Reiner Chicago Symphony recording on RCA (RCA LSC-2222) is very fine. 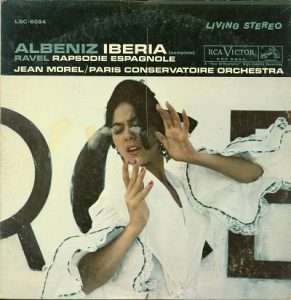 Maurice Ravel’s Rapsodie Espagnole is another wonderful, atmospherically Spanish piece, as is his most famous composition, based on a Spanish dance, Bolero. The two record album pictured includes the Ravel piece with the much longer Albeniz Iberia mentioned above (RCA LSC-6094). It was reissued by Classic Records.  The Paris Conservatory Orchestra is conducted by Jean Morel. This album was engineered by Decca for RCA in 1959.  The engineer was the great Kenneth “Wilkie” Wilkinson. 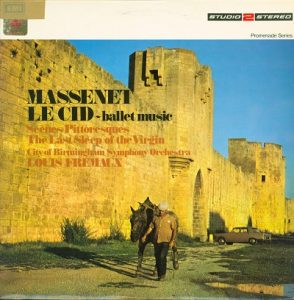 Jules Massenet was most famous for his operas, of which he wrote 32.  However, his ballet Le Cid is based on the Castellian folk hero El Cid who lived in the 11th century. It is full of Spanish rhythms and dances.  The album pictured is one of the TAS Superdiscs. It was recorded by EMI in their Studio Two series (EMI TWO350), and later reissued on the EMI ESD series, both excellent recordings. The conductor, Louis Fremaux leads his City of Birmingham Symphony Orchestra. 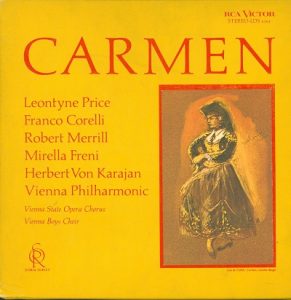 George Bizet’s major contribution to the musical literature is, of course, his grand opera, Carmen. Set in Sevilla, Carmen has some of the most recognizably Spanish sounding music. It is sung (and spoken) in French however. Carmen is one of the two most popular operas – either first or second with Verdi’s La Traviata. Carmen did not get a good reception on its debut, and tragically Bizet died (at the age of 36) before the second performance. A great performance of Carmen is on RCA, with Leontyne Price in the lead role, and Karajan conducting the Vienna Philharmonic. Recorded in Vienna in 1963, it was one of many fine RCA recordings engineered by Decca.  The producer was John Culshaw and the engineers were Gordon Parry and Jack Law. It is a TAS Superdisc. 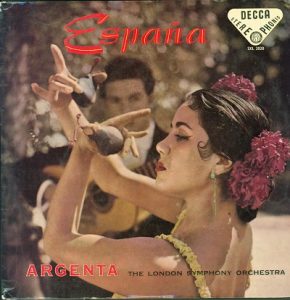 Finally, what many consider as the most Spanish sounding composition, is Espana, a rhapsody by Emmanuel Chabrier.  Chabrier was inspired by a trip to neighboring Spain, where he heard the music of the countryside. However, most of the themes of Espana come from Chabrier himself. The Decca album, Espana (SXL2020), a TAS Superdisc, contains a fine performance of Espana, also with several other “Spanish” pieces, all but one were written by non Spanish composers.  It was conducted by the Spaniard Ataulfo Argenta with the London Symphony. Argenta died tragically young at the age of 44.

Interestingly, the three Spanish composers I mentioned in the beginning of this blog all were influenced by long stays in France. Both Falla and Granados studied in Paris, and Albeniz, as a 7 year old passed the entrance examinations at the Paris Conservatory but was not accepted because of his age. Albeniz eventually settled in France, where he wrote his most famous work, Iberia.