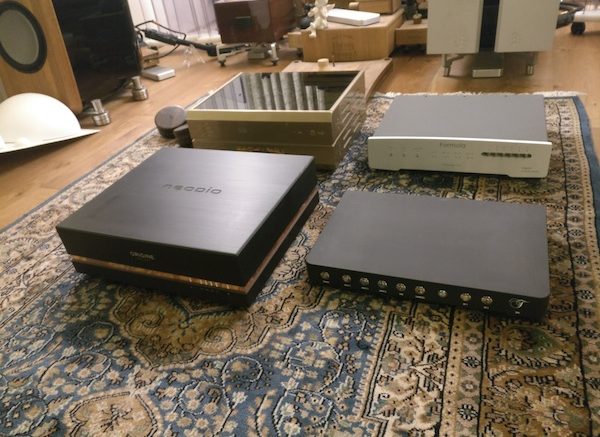 In Mumbai during Xmas hols, stopped by at Jazzhead’s, where over two days we did a shootout of:

Jazzhead’s system is all Stillpointed, and a set of the shun mook giant diamond resonators I brought along were rotated under various dacs to compare with the SS ultra. The rest of his system is comprised of Trinity Pre, Vitus SS102, and Marten Coltrane 2, with elaborate Tripoint and Entreq grounding network, SMT wings and diffusers, and cabling from Stage 3 Kraken and Leviathan, in a 25 x 11 room. All compares were done using Redbook CDs.

Jazzhead owned the Stahltek combo, which I heard two years ago, and since then had bought the Trinity, Neodio, and the Aqua, and the system was voiced around the Trinity which had been the main go to dac in the system.

We tried to put the Shun Mook Giant diamond resonators under the Trinity, but could not balance the relatively light Trinity properly. We therefore moved the Aqua, and the Aqua-mook combination seemed more organic than the Trinity, though only in the mids. The Aqua had noticeably less extension on either end, and was not nuanced enough for complex music. It also was in a flatter plane, less depth, and slower. Yet it was quite musical due to the natural mids (On the second day we compared Aqua and Trinity directly on Stillpoints, and the Aqua-stillpoints made all three pairs of ears bleed and we had to stop it immediately).

Jazzhead had picked up the Neodio after listening to it in a Rockport Arrakis-Dagostino system, but since had concluded he liked the Trinity better. When I had visited him two years ago, when had had the Stahltek, I remember being impressed by the midbass fullness and flow, in line with the character of good Vitus systems. This time, when I walked in with the Trinity on, the first thing that struck me was a clean and detailed stage, but as I sat there for one hour, I remained unmoved. We then put the huge Neodio Origine on the mooks, and I went WOW. The system had transformed itself into something organic, with harmonics, decay, tone, massive stage, sense of space and depth. Every track we played was more musical, the Mahler woodwinds were delicious, it was easier to hear the breath through the flute, the Bach Cello suite had more harmonics and body, and just the coherent flow of the whole stage made you air-conduct the orchestra.

The Neodio on the mooks now reminded me why I had liked his system two years back, plus this seemed at a higher level. The second track on Mendolssohn’s Elijah starts at a very soft, low volume level and grows to a quite complex, loud passage. On average components, the soft part goes largely ignored and the attention builds on the louder parts. With the Neodio, the suspense and grip built up from the initial notes.

There had been two shortcomings noted with the Neodio…the Winterreise vocals seemed to be too big, over intimate, and over fleshed out, and the piano had less leading edge attack and nuance than compared to the Trinity on Stillpoints, though with a more organic body. On those two, the Trinity was doing better. The Trinity was always cleaner and with more leading edge attack, faster, giving what seemed like a transparent stage, but it sounded sterile, lacked decay, and the tone, harmonics and the body of the Neodio. It was also in a flatter plane compared to the Neodio (but not to the Aqua), with too much digititis for my taste. It also seemed to be more start – stop without the flow of the Neodio. Despite the two shortcomings, the Neodio had provided a much more enjoyable experience.

By the second day of the shootout, which was three days later, Jazzhead had been able to address the Neodio shortcomings by making some grounding changes. The Winterreise vocals were now no more too large or overfleshed out. The Piano while not the same leading edge as the Trinity, was now more nuanced than before and hence enjoyable.

We also tried the Neodio on the Stillpoints, and the quality was marginally below Trinity on stillpoints. The organic tone and the stage was lost and was instead replaced by a toppy digitis with loss of decay. This explained why Jazzhead had relegated the Neodio to second place initially. 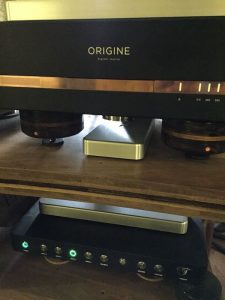 We again went back to the Aqua and the Neodio to confirm what we heard. Over the next two days, Jazzhead was texting superlatives about the Neodio on the mooks combo. His reports were that the rock drums were much more fleshed out, with decay, and impactful, rather than overtight and abrupt. When he sent me the above picture, I observed that the two looked similar, as both have a golden stripe between the darker color. Jazzhead replied back that the “two are a cosmic match in heaven, I tell you”

When I went over on the second day, we had another audiophile, Josh, join us. Josh is a regular at Jazzhead’s, and I asked him what he thought of the system now. He said there was more stage, better bass, and more importantly, better tone, bloom, and harmonics.

On the second day, after starting with the Neodio and also listening to some rock, we moved to the Stahltek dac, which was coming out of storage after a year, and placed it on the mooks. The Stahltek was the second best dac of the lot, close to the Neodio, but it had a hard edge all over the soundstage and a toppiness that kept it second. It had a digititis, and Jazzhead will check if that can be addressed through a longer settling time for the dac (as it was fresh out of storage) and the transport cable. Btw, the Neodio on the first day too had come out of hibernation. The system had been voiced around Trinity as the main incumbent dac

To summarize, the Neodio on the mooks reigns supreme in this system. The stage is ginormous, excellent sense of space, very analog sounding, great decay and musicality, and the other striking feature is the density of the tone. The flute, clarinet, cello, strings, all play in such a manner that every note keeps you engaged. It can sound relaxed without sounding laid back or without showing a lack of energy. There is energy with an ease and flow that makes it very natural. Some might say the “bigness” and character is a color, but despite the character, I just find it more real. 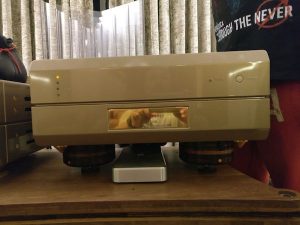 The Stahlek dac comes second. These two are a fair distance from the other two. The Aqua on mooks is more organic in the mids than the Trinity on stillpoints, though overall we would rank it after Trinity because of lack of extension on either end and less nuance to handle complexity. But musically, it was more natural to the ears than the Trinity. The Neodio on the Stillpoints is next to the Trinity on still points, while the Aqua and the Stahlek on Stillpoints made our ears bleed. 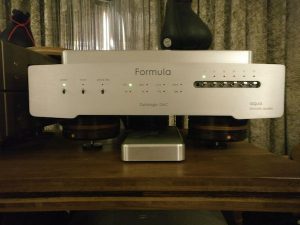 Meanwhile Jazzhead, the Tango of digital, has sourced himself a set of the Giant diamond resonators from the used market, and will next month repeat the compares by replacing the Trinity pre and Vitus power amp with the Zanden pre and power combo, which he also owns. I wanted to do that myself but did not get the time.

The large surface area of the Neodio puts it at a great advantage to play around with the mooks. Depending on how wide or narrow you make the mooks triangle area, you can change the energy levels and the size of the stage, and make it more laid back, more focused, etc. I have long since decided to avoid components which have too small a surface area or too many screws below, as this stops them being placed effectively on the mooks. The Neodio further reinforced that opinion

A few caveats with the demo

The Neodio with its direct sales model is priced same as the Aqua, and the whole solution is 1/6th to 1/7th the price of some of the other transport plus dac solutions above. And it is sonically superior.

The Neodio becomes the second digital to the ZD reference components list.

Rest of the system

With the Neodio on the mooks, Jazzhead’s system is extremely musical and something I could easily listen to all day long. Despite a narrow room, he has treated it well to make it sound clean, the room gets to the right levels of volume without pressurizing the ears, and there is a cohesion and decay. He has pulled in both the speakers and the seat from the respective walls to sit in the middle of the room, giving him a good stage and bass response. With the SMT panels, he can alter his depth and the focus of the stage to his choice very easily. With a tweak to the cables, he can pull up the tonal balance to the treble or to the mids. There is an elaborate grounding scheme of Tripoint and Entreq that cleans up the stage and adds focus by lowering the noise floor.

He has 1 SMT wing behind each speaker and 1 behind but in the center. In my previous trip, we were able to AB with and without. He also has first reflection points fixed to the walls that cannot be ABed, but then he has 1 wing on the floor in front of each speaker, raised up at a slight incline towards the speaker, and this could be easily ABed. During each AB, there was a significant drop in soundstage, 3d, flow, and focus. With them in, the room seemed bigger and the bass and stage behind the speakers had a nice depth that can be altered.

A subset of the recordings 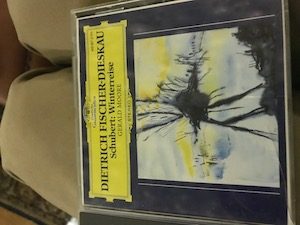 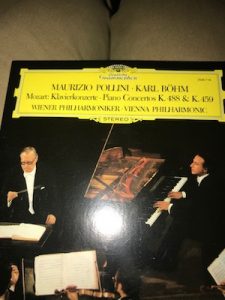 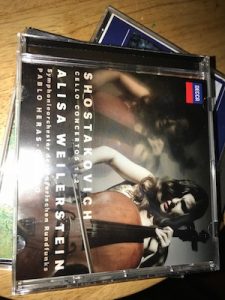