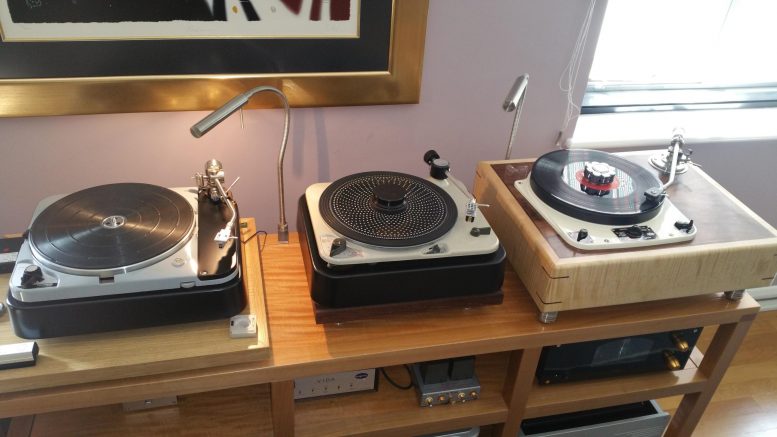 I first posted the below report on WBF in September

Busy week. It was good catching up briefly with Marty on Tuesday, when my gf, I, and Marty attended the Verdi Requiem at Barbican.

Anyway, Thursday at Barbican I attended Debussy La Mer/Haydn Trumpet Concerto/Shostakovich 5th, all of which were brilliantly performed. The Verdi Requiem had overloaded the Barbican, but this one was awesome. Tomorrow I have Sibelius Violin Concert and Mahler 4 at the Barbican, but before that in the afternoon my gf and I go to King’s Place for Prokofiev 1 and Mozart’s Oboe concerto

Today, I went to an audiophile buddy outside London who is also a classical aficionado, has been through Brinkmann Lagrange, all of the SMEs, and mentioned he had got bored off vinyl and wanted to sell of his record collection till he heard the Garrard. He then bought the Shindo 301, followed by the Audiograil modded 301 with the Bob C plinth (pretty famous in the UK), realized there was not much difference, and sold the Shindo to keep the Audiograil.

He later bought the Schopper modded Thorens 124, which I now realize in hindsight is quite well respected on the web.

The Thorens had the FR 64s arm and was playing through the Shindo Giscours phono. The Garrard had the EAT arm, a copy of the vintage ortofon arm but played through a different vintage japanese SS phono – Aurasound Vida

I initially played a Bach cantata and Scheherazade through his Esoteric K01 to get a feel of the system. The Shindo pre connected to the top of the line shindo amps and Tannoy GRF corner speakers.

I then played Scheherazade, same peformance, via the Thorens. I was gobsmacked, and to me the jump over the Esoteric was significant. For a complex symphony, it had much more resolution, bass, dynamics, air, and tone of course, then a supposed modern day digital.

I then moved the LP over to the Garrard, and immediately realized I preferred the Thorens. The Garrard was excellent, just something about the 124 drew me to it. I kept playing an LP on one followed by the other – and realized I was preferring the Thorens.

At this time, the Thorens had the Zyx Uni II on the FR 64, while the Garrard had the Miyajima Madake. So I swapped the miyajima to the Thorens. My conclusion is that Zyx has better dynamics, more frequency extension, more bass, and better resolution. I have since heard the Madake through Thrax and FM 123, and not liked it. It has been muddy, colored, and not detailed enough for orchestra. It does individual instrument tones well. It sounded spectacular at Oswald Mills with the Anatase (modded Lenco) and Schroeder CB arm. I am a big fan of the Miyajima Mono carts though. The mono originals played on the TD 125 with the Miya zero were clearly sounding better here than stereo.

I was surprised though that the Thorens had better bass, because Garrard is reputed for bass. My host explained that the FR 64 does have more bass and dynamics as well, which could be accounting for part of that effect, and I later read on the web that the Schopper mods do increase the bass and resolution of the Thorens.

After that, we changed the cartridge on the Thorens to the Audionote IO Gold. I did not think there was anything to choose between the AN IO and the Zyx, slightly different presentations. The Zyx had more bottom end on piano, easily audible on Richter playing Liszt concertos. But then AN gave a slight more top end, but don’t think it would compare to an Ortofon, Lyra, or Vdh on that front.

I did this compare a few months later with the Thorens going into the Aurasound Vida, and the Garrard into the Shindo, i.e. I swapped around the phono stages to take out any phono stage advantage the Schopper TD 124 might have had. But even so, the differences remained. The AN IO was then being played through a Kondo SUT, and it sounded considerably more dynamic and bassy. The Zyx played as is. There were further recordings added to the test such as Beethoven 45 rpm Appassionata (piano), Lala Symphonie Espagnole played on Decca orginal ED2 by Ricci and on Classic Records by Henryk Szeryng (latter is better), and a compare done between Decca ED3 and reissued Decca of Oistrakh Bruch Scottish Fantasia where the Decca reissue was clearly compressed.

Overall, I was really, really impressed by the Thorens Schopper 124 with the FR 64 and is my favorite giant killer Turntable. At similar price points you can look at Pint Triangle Anniversary and Sony 8000. A bit above, STS Motus II. Another thing that impressed me were the time intervals – the pauses so that each note plays out more, and so that you listen to the music between the notes. The owner previously also owned the Shindo 301 and prefers the Schopper.

The price is 7k Euro from Schopper. Make sure you get the Power Supply, which is a key to the performance.

As you can see, my Italian audio buddy Gianluigi has had some excellent TTs over the years, and has recently bought the Schopper.

Also, an Italian dealer for Schopper (www.Mad4Music.it) who is reputed to be the best analog set up guy in Italy, told me that one of his clients sold off the Clearaudio Statement for the Schopper. For me, this is the TT of choice given the price and the giants it has slayed.