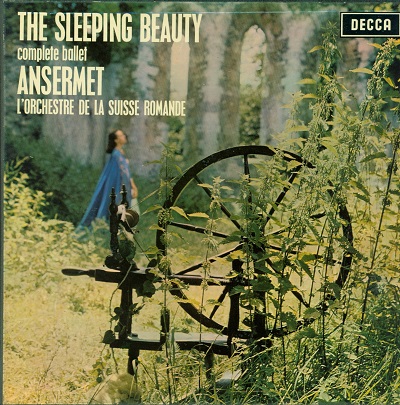 The second of Tchaikovsky’s three great ballets is Sleeping Beauty.  Like the other two, it was choreographed by Marius Petipa of the Imperial Ballet, later to become the Kirov and Mariinsky Ballets in St. Petersburg.  Although it was favorably received at its premiere, it gained greater popularity after Tchaikovsky’s death in 1893, and by a decade later was the second most popular ballet of the Imperial Ballet, with over 200 performances in 10 years.  The ballet is very long, about four hours including intermissions, and is almost always cut in performance.

Sleeping Beauty is based on the timeless fairy tale.  The story begins with a prologue where six fairies are invited to give presents at the birth of a royal princess. However, an evil fairy, enraged at not being invited, crashes the party and casts a spell against the royal family dooming the princess to die on her 16th birthday. The good lilac fairy is able to mitigate but not reverse the curse, with the princess doomed to a 100 year sleep.  The first Act I sees the curse fulfilled by a finger needle prick of the beautiful princess at her 16th birthday, casting her into a deep sleep. The good lilac fairy puts the rest of the court to sleep and covers the castle with a thick covering of forest.  Act II takes place one hundred years later. A handsome prince is led to the princess by the lilac fairy, after they defeat the evil fairy. His kiss awakens her from her 100 year slumber. The rest of the royal court is awakened and the prince proposes marriage to the princess. Act III concludes the ballet with a royal wedding and a ball including many characters from different fairy tales.  The most famous piece in the ballet is the “Sleeping Beauty Waltz”. 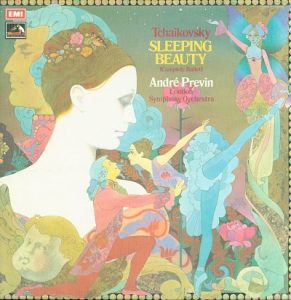 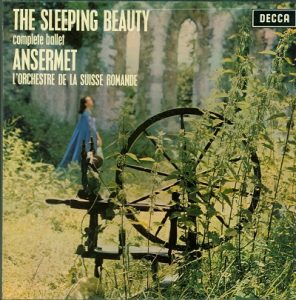 My favorite recording of the complete ballet is on EMI (SLS-5070), recorded in the 1970’s by Andre Previn conducting the London Symphony.  Another fine recording was done by Ansermet for Decca (SXL-2160-2) in 1959 with his Suisse Romande Orchestra in Geneva.

The same year I saw Swan Lake with the Bolshoi Ballet, 1966, I was able to also see Sleeping Beauty. This time is was with the Royal Ballet, which was also touring the United States.  It was a bit of an accident.  Several of my roommates and I had tickets to see the famed Russian dancer Rudolph Nureyev dancing with Margot Fonteyn, prima ballerina of the Royal Ballet in a series of short ballets.  Fonteyn later attained the rank of Prima Ballerina Assoluta. After being entranced by their performances, my roommates and I made the spur of the moment decision to attend the following evening’s performance, standing room only tickets.  It was Sleeping Beauty, with the Russian born Prima Ballerina Svetlana Beriosova dancing the role of the Princess Aurora. 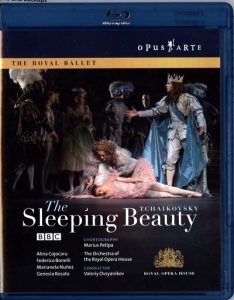 I have only one DVD of Sleeping Beauty.  It is a modern performance with the Royal Ballet. It is beautifully staged and danced, with the choreography based on the original work of Marius Petipa, with some additions by the more contemporary choreographers of the Royal Ballet. The Royal Ballet, along with the Bolshoi and Mariinsky Ballets of Russia are among the top handful of classical ballet companies in the world.

The last of the three great Tchaikovsky ballets is the Nutcracker. Like Sleeping Beauty it premiered at the Imperial Ballet in St. Petersburg, staged by Marius Petipa and choreographed by Lev Ivanov.  Like some many of Tchaikovsky’s major works, it was not initially popular, but is now the most popular of all ballets, particularly in North America, where ballet companies report that they often earn as much as 40% of their annual attendance from these holiday performances of the ballet.  Because of the large number of children in the cast, the companies typically involve children from their own or other local ballet schools in the performances.  Tchaikovsky also wrote a shorter suite made of eight pieces from the complete Nutcracker for concert performance without dance.  That was immediately successful and continues to be so today.

The story is meant for children, and its setting is at Christmas. The ballet is in two acts. The first begins with a Christmas party with a giant Christmas tree at the center of the stage.  The gifts include a Nutcracker in the form of a soldier. Clara, the little girl comes out at midnight to check on the Nutcracker and magically, she shrinks to his size (the tree appears to grow which is a thrill for the audience , but it is actually Clara who is supposed to be shrinking to the size of the Nutcracker.). The battle between good and evil is comic – with toy soldiers led by the Nutcracker, who is transformed into a prince, fighting and vanquishing the evil mice. The act ends with the Nutcracker and Clara being transported to a magical land. The rest of the ballet has a series of vignettes of different soloists and small ensembles dancing in front of the hero and heroine.  The music is also exotic, with themes from distant lands and with many non human characters. 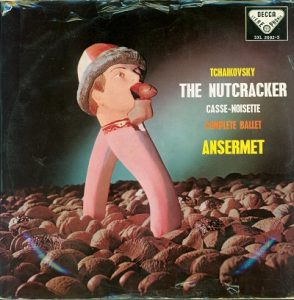 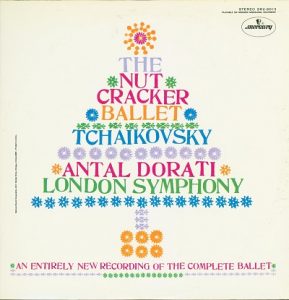 Two of the early stereo recordings of Nutcracker are also among the best. The first is with Ernest Ansermet conducting his L’Orchestre de la Suisse Romande (based in Geneva) on an early Decca (SXL-2092-3) recording recorded in 1958 . Antal Dorati recorded the Nutcracker twice in stereo, the first for Mercury (SR2-9013) with the London Symphony in 1962. This recording was done using 35mm film rather than standard tape. It has exceptional sonics. 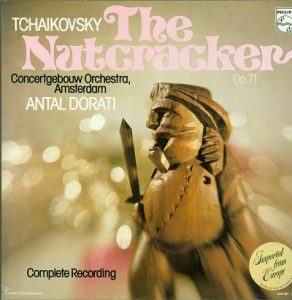 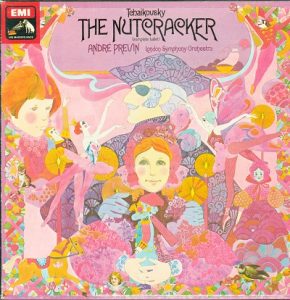 Thirteen years later, for Philips records, Dorati rerecorded the ballet with the Concertgebouw Orchestra of Amsterdam.  Some critics have said the latter Philips (6747257) recording is one of the finest ballet recordings ever made..   A fourth recommendation is with Andre Previn and the London Symphony on EMI (SLS-834), which is also a TAS (The Absolute Sound) Superdisc. 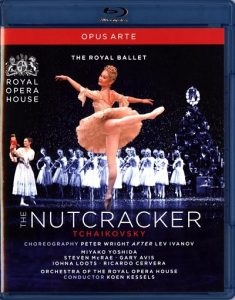 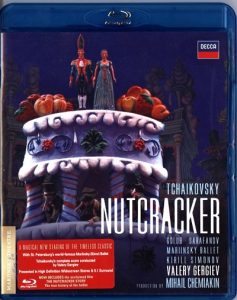 I have two excellent, but different bluray DVD’s of the Nutcracker.   An excellent performance of a traditional performance is by the Royal Ballet.  The choreography is a revision of the original Lev Ivanov version. There are some additional scenes, added at the beginning and end, which focus on the godfather, Drosselmeyer.  There is another performance I own by the Mariinsky Ballet, with a revised, darker story line, going back to the original story by E.T.A. Hoffman, with a brand new choreography.