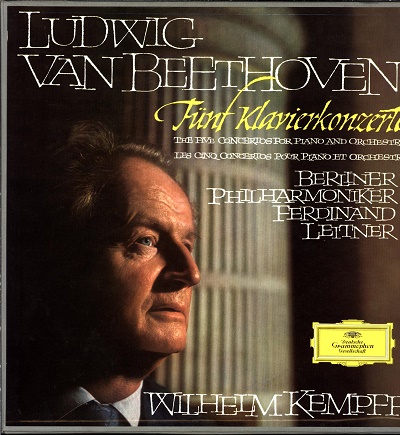 The last two of Beethoven’s piano concerti are universally considered among the very finest piano concerti ever written, with many removing the “among” from the previous phrase. I will also have a brief comment at the end about the less well known 3rd concerto.

Over the past twenty years I have become intimately familiar with the five Beethoven concerti. My wife, a fine amateur pianist decided to enter a local piano concerto competition. The prize was to play the concerto with a local orchestra. Thirty years before she had played Beethoven’s First Piano Concerto at her college graduation. Medical school, a professional career and our daughter curtailed her piano practice time severely for many years. However, when she heard about this competition, she asked me what concerto she should learn to play. I told her my favorite concerto was the Beethoven G major (#4), not knowing how difficult it was to play. She had about a year to learn the concerto and won the competition. From there she learned the other Beethoven concerti over the following six years, playing all with local orchestras. She even was awarded a prize at one of the first Cliburn Piano Concerto competitions for amateurs in Fort Worth. Her prize was playing the Emperor Concerto (#5) first movement with the Fort Worth Orchestra.

The fourth concerto was revolutionary when it first premiered. Audiences were shocked when, instead of the orchestra playing their exposition before the piano entered, Beethoven had the piano play the first theme before the orchestra enters. The concerto received its public premier with Beethoven playing the piano. It was part of a mammoth concert of all new compositions by Beethoven, including both the fifth and sixth symphonies, the Choral Fantasia for piano, chorus and orchestra, the soprano aria “Ah Perfido”, two sections of his Mass in C, and a solo piano fantasia. The concert was held on December 22, 1808 in an unheated hall and lasted over four hours. It was also to be the last time Beethoven performed as soloist for a piano concerto, because of his deteriorating hearing.

The fourth concerto is in three movements. The first movement in double exposition form is long and complex. After the shock of the piano beginning the first exposition, the orchestra takes its accustomed position of completing the exposition, except for another surprise. At the end of the exposition, the piano enters for a second time and carries on through a transition to its second exposition. This second exposition is twice as long as the first, and includes a new theme, not heard before. Unlike his earlier concerti and the general practice of the time, Beethoven wrote his own cadenza for the first movement of the concerto. In fact he wrote two different cadenzas. The first was written for his friend, student, and patron Archduke Rudolf, a fine amateur pianist. The second is a fiendishly difficult cadenza that Beethoven wrote for himself to play. Most of the recordings I have heard use the first cadenza.  The slow second movement has the orchestra repeatedly loudly challenging the piano solo, which responds quietly and eventually wins them over. One Beethoven biographer likened it to Orpheus taming the Furies at the gates of Hades. The second movement leads directly to the third movement, a delightful rondo.

After its premiere in 1808, it took 20 years before the fourth concerto was played again, a year after Beethoven’s death.

The Emperor Concerto was written between 1809 and 18011, but not publicly premiered until 1812, and then by Beethoven’s student Carl Czerny, a reflection of Beethoven’s failing hearing. Although the concerto begins with the orchestra, it plays only one chord, an Eb major chord, the home key of the piece. The piano then enters with a set of Eb major arpeggios up and down the keyboard. The orchestra plays another chord, this time in the subdominant key of Ab. The piano then plays another set of arpeggios in Ab, before going to the dominant seventh chord of Bb7, and finally back to the tonic key of Eb. This is a rather standard harmonic progression, I-IV-V-I. What is unusual is that both piano and orchestra are playing, instead of the orchestra alone. Things move to a more conventional double exposition sonata form. Like the fourth concerto, the piano’s exposition introduces a third theme, not found in the orchestral exposition. The second theme is also unusual in that it enters in the distant key of B, instead of the expected dominant key of Bb, which it finally comes to at the end of the theme. This mystery is solved in the second movement which is a beautiful lyrical slow movement in the key of B. The third movement is another seemless transition from the second (like the fourth concerto and the violin concerto) to a joyous rondo. 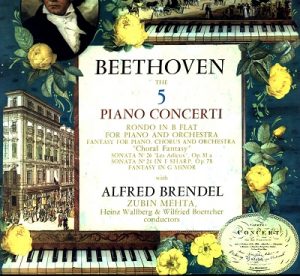 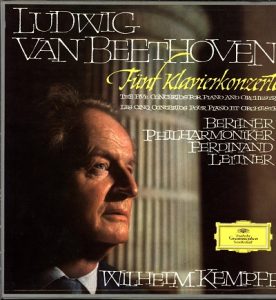 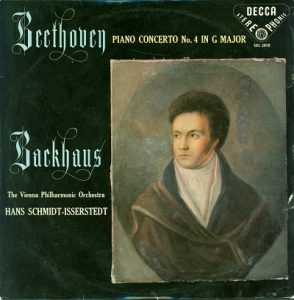 The five Beethoven concerti are among the most recorded of all concerti, with many artists having made more than one set of recordings during their careers. Generally, recordings of the entire sets can also be purchased as individual albums. Well regarded complete sets include those by Alfred Brendel (I recommend the first two of his three sets, the first is on Vox-Turnabout TV34205-9 before he became famous, pictured above, while the latter two are on Philips), Wilhelm Backhaus (in the early days of stereo on Decca), Leon Fleisher (on Epic with George Szell and the Cleveland Orchestra), Stephen Kovecevitch (then known as Stephen Bishop on Philips), Murray Perahia (on Columbia), Arthur Rubinstein (on RCA, he did three sets in the stereo era), Vladimir Ashkenazy (on Decca), and Wilhelm Kempff (my wife’s favorite with Ferdinand Leitner conducting on DG138870-3, pictured above). 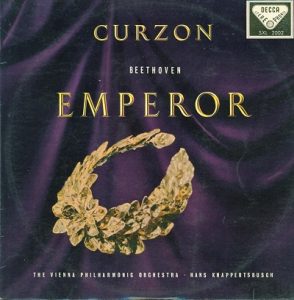 There are many individual recordings of the either the fourth or the fifth. Several come to mind. Ivan Morevec (4th on Supraphon), Mitsuko Uchida (4th on Philips, now Decca), Clifford Curzon on one of the earliest Decca stereo releases, and Rudolf Serkin (5th with Bernstein on Columbia).  N.B. One reader wrote about the less than great sound quality of the Curzon recording.  I relistened to the recording and must agree. The performance is excellent, but the recording is only fair to good.) 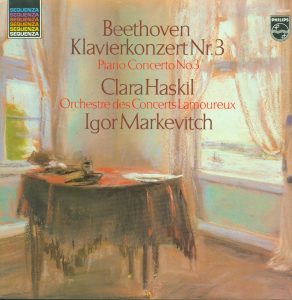 As an addendum, I do not want to ignore the 3rd concerto, written near the beginning of Beethoven’s middle period. It is here I want to single out one of the most neglected pianists of the 20th century, whom some would rank as number one.  She is Clara Haskil and her recording of the 3rd concerto on Philips 6527090 is something very special.