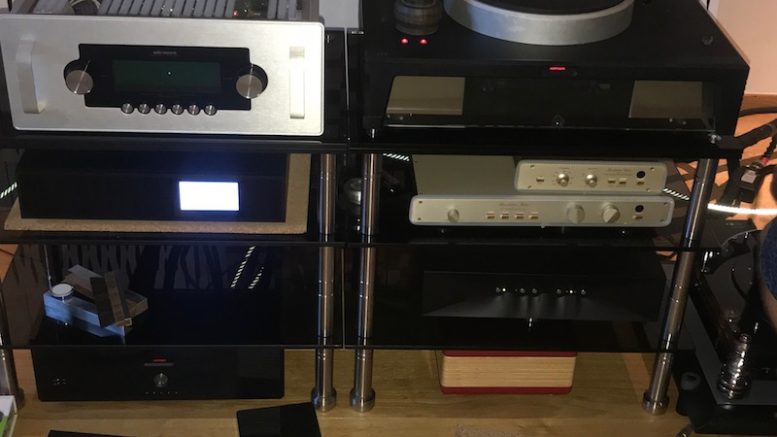 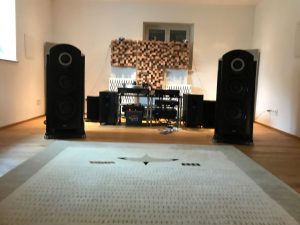 I revisited him to do a phono shootout. Since my last visit, gone are the MSB amps, the VTL pre has been replaced by the AR Ref 6 driving the VTL amps, and the Schroeder + MSL Eminent Ultra (0.3v) is the only combo that resides on the Dohmann

We made a plan to compare the Thrax phono with: 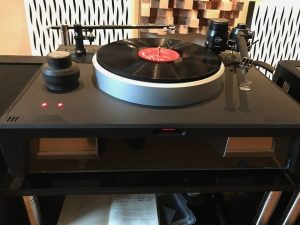 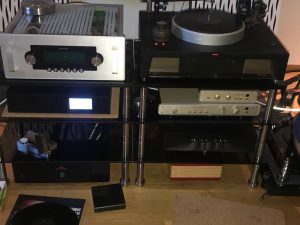 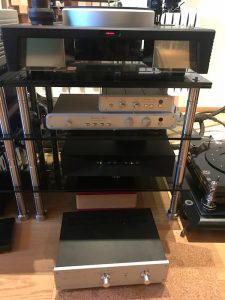 All phonos would upstream have the Dohmann with The Schroeder CB + MSL Eminent ultra. The FM, Audio Tekne and Fabrizio’s phono were all supplied by the host’s friend, www.soundbyhari.com – Additionally, he is also the distributor for Vertere, and Vertere himself is the distributor for FM in the UK.

Hari also brought in the 20k Vertere arm + TT combo, with a 30k additional power supply, and a Top Wing Red Sparrow mounted on it.

So, additionally we were also able to compare

Hari and Fabrizio came in the previous day to make sure the gear was set up optimally.

My own primary aim here was to again check if I am valve phono guy or a SS phono guy.

We started off with the Dohmann set up into the Thrax. From the Thrax, we swapped to Fabrizio’s, and swapped back and forth. We then played some of the records on the Vertere set up, went back to the Dohmann, and brought in the Audio Tekne. The Audio tekne is high gain and sounded right only with the Vertere which had the Red Sparrow that is under 0.2

After the Audio Tekne, we added FM 123 phono with Dohmann upstream, then immediately added the FM 245 as the 123 through the audio research did not have sufficient gain. The FM components have a low gain phono, a high gain preamp, and steps in between to adjust gain levels. After listening to the FM pre + phono, we added the Thrax phono back in. The Thrax was played through both AR Ref 6 and the FM preamp using both the Dohmann and the Vertere set ups. Each time we would swap back and forth

The Audio Tekne for me was dark, closed in, and colored. It had some rich tonal colors, but not for me, and maybe it can do well in an whole audio tekne system with audio tekne horns, but I understand from a couple of other users that is how the sound is, and you like that type of sound or you don’t. Like the Thrax, it is extremely quiet.

The Thrax was the best of the phonos. It was transparent, and as we changed LPs it showed more differences in the labels than with FM; it was also more open sideways, front to back, and vertically, with higher separation.

The Thrax + FM pre produced the best sound in the system. This had the most excitement, best drive and energy, excellent tone, wide soundstage. It made me air conduct. Both the Thrax and the FM pre have high and low gain buttons, and we experimented with various combinations. With the FM on high gain, LPs having a higher dynamic range would go from sounding excellent to too loud and fatiguing. The opening French horns on Schubert’s 9th were the best, but as the orchestra played louder we had to turn this off. Low+Low seemed the best on such LPs, and was still better than the other combinations. The flexibility allows one to tune as per the cart and the LP.

Having experienced FM in the stellar Audio Arts set up (though the components are a model up), and now in two other set ups, my guess is that FM needs a lot of gain management. Both FM and Dartzeel have sounded as good as anything when systems have been set up around them. These are well settled systems. Valve phonos seem to sound better with various gear…Aesthetix, Allnic, Thoress, Thrax, can probably be optimised further, but sound quite good when combined with a variety of gear.

Now, the surprise of the day was Fabrizio’s phono. This was close to Thrax, in some ways better, in some ways less. It had more transparency, and though the Thrax did not sound colored relative to the others, there was a slight valve veil as compared to this phono. Thrax held it a bit better on tuttis, but the punch and drive on Fabrizio’s phono was better, and it painted a more open and a wider stage. It was more exciting. The strange thing is I could not detect much difference while comparing these two. It was only later that I was told both have Lundahl transformers…so maybe that is why. Or maybe because both were the most transparent. This is the first iteration of Fabrizio’s phono, so improvements can be expected.

Fabrizio’s phono has Eq curves for Decca, Columbia, HMV, Telefunken. The FM is extremely flexible in terms of Eq curves and has a mono switch. The Thrax is not as flexible as the others.

Both Hari and Fabrizio were adept at set up and paid careful attention to phase. We regularly checked polarity of the power cables, and inverted phase with the preamps. The owner later informed me that he found Fabrizio’s cables better than his Goebbels, and had also been extremely impressed with his USB cable, which was apparently a perfect 75 ohms. This is not something I demoed, but would like to based on this feedback. Anyone who is interested should visit https://www.fabercables.com/ and https://www.faberpower.com

Overall, remembering the impression I carried away on my previous trip, the changes to the preamp, cables, phasing etc seem to have resulted in more ease and flow.

I think based on this and another phono shootout I am posting, I am almost certain I will go the valve phono route, with a cheaper flexible SS phono to be added later. I just need to iron out how I will run the mono set up…Mono cart through a mono switch, adding a Miyajima SUT to a stereo phono with Miyajima zero cart, adding Robbyatt’s SUT with EMT TMD 25, or running a stereo cart through a mono switch. And how do I handle mono Eq? Need to find an optimal way.