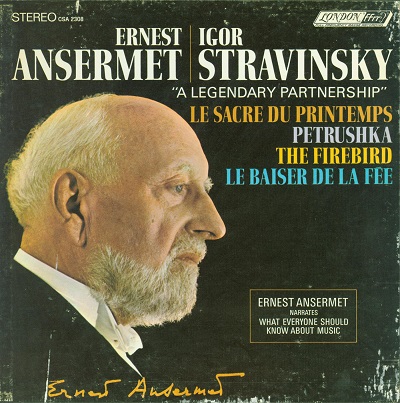 A year after his great success with Firebird, Stravinsky wrote a piece intended for concert performance. Stravinsky said later that he saw an evil puppet as the main character. Dhiaghilev heard the piece and decided it would make a great ballet, with the Russian puppet, Petrushka (Punch in English).  Stravinsky then composed the ballet that winter for the 1911 season.  Again Michel Fokine was the choreographer and Vaslav Nijinsky play Petrushka.  It became one of the most popular ballets in the repertoire of the Ballets Russes.  Stravinsky revised it in 1947.  Both versions are played today. 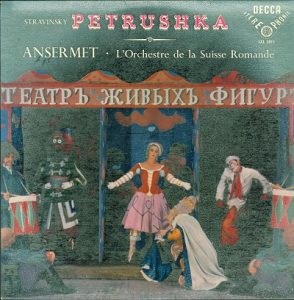 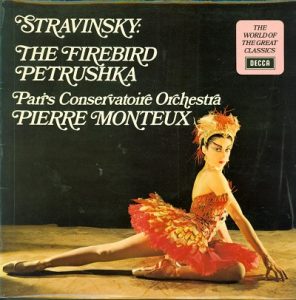 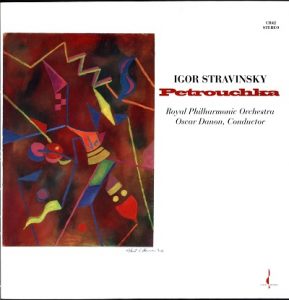 There are three recordings that I recommend.  The first is by Ansermet, recorded at the same time as the Firebird (Decca SXL-2011). This was Ansermet’s third recording of Petrushka, but the first in stereo. His first was the first high fidelity recording, done in 1946 with the London Philharmonic on 78 RPM records. The second was an early LP, recorded with his Swiss orchestra in 1949. The two recordings are discussed in my Blog 1.  The second recording is by Pierre Monteux with the Paris Conservatoire Orchestra.   It was engineered by Decca for RCA in October and November 1956 and also includes his Firebird Suite. Decca reissued the album in stereo as Decca SPA-152 and London STS-15197. Monteux was the conductor of Petrushka at its premiere in 1911, so provides an authoritative performance. RCA never released the album in stereo in the US in their Living Stereo LSC series.  When Classic Records reissued a large number of Living Stereo albums in the 1990’s, they issued this version of Petrushka in stereo for the first time (Classic RCA LSC-2113). Unfortunately, it is missing the first movement of Petrushka, at least in my copy. So stay with the Decca or London version.  The last is by Oscar Danon and the Royal Philharmonic Orchestra (Chesky CR42, a reissue of an earlier Reader’s Digest album).  This was also engineered by Decca in 1963, with Kenneth “Wilkie” Wilkinson. The Danon recording on Chesky has received well deserved plaudits for both its sonics and performance.  The Ansermet was a TAS Superdisc.

After completing Firebird in 1910, Stravinsky told Dhiaghilev of an idea he had about a primitive dance in a circle, which would become the Rite of Spring. However, by the time Dhiaghilev returned to Stravinsky, he had moved on to the piece that would become Petrushka. He returned to Rite of Spring for a premiere in 1913. The choreography was by Nijinsky, and the premier was once again conducted by Pierre Monteux, who wanted several changes in the orchestration, with which Stravinsky complied.  The riot which took place during the first act, was as much for the modernistic dance of Nijinsky as the modern music of Stravinsky.  There were only six performances of the ballet in Paris that season. Later the choreographer Massine did a new production with Ansermet conducting in 1920, to a more positive reception.  Interestingly Monteux commented in an interview in his old age, saying that he did not like it then, and he doesn’t like it now, even after conducting it 50 times. 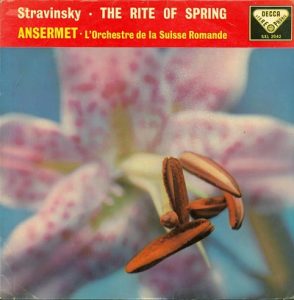 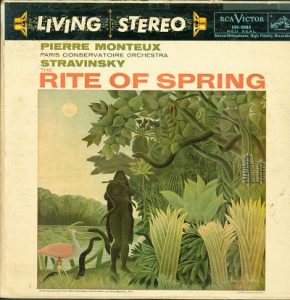 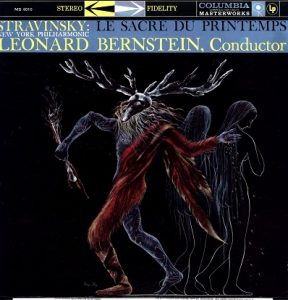 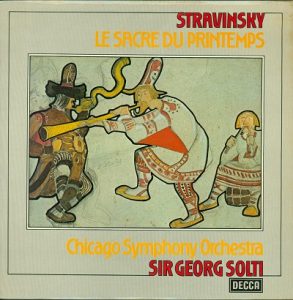 My first recommendations again are for recordings made by the two conductors of the Ballets Russes who conducted many performances of Stravinsky at the time the pieces were first composed and performed.  Ernest Ansermet completed his trilogy of ballets with the Rite of Spring, again with his L’Orchestre de la Suisse Romande. The recording was made in April and May of 1957, a year before stereo records were first released.  The producer and engineer for Decca were Jimmy Walker and Roy Wallace. They did most of the early stereo recordings for Decca in Geneva.  Wallace was a brilliant engineer and was responsible for the first Decca tree microphone array. Even though Monteux never liked the Rite of Spring, he did a fine recording of it, at the same time as his Petrushka and Firebird Suite albums. Again it was engineered by Decca for RCA. A third recommendation is the famous recording by Leonard Bernstein with the New York Philharmonic on Columbia (MS-6010). It is considered by many the most emotionally involved performance.  A fourth recommendation is the Solti Chicago Symphony Orchestra recording for Decca (SXL-6691) which is a true sonic spectacular. It is a TAS Superdisc. 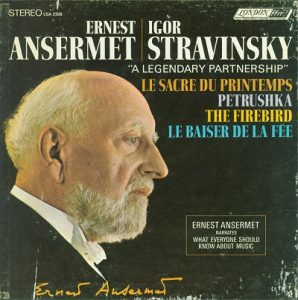 Decca issued a box set of Ansermet conducting Stravinsky’s three major ballets along with a fourth ballet “The Fairy’s Kiss” in a box set. It also includes a lecture by Ansermet. (London CSA-2308, Decca GOS 540-2). It is a TAS Superdisc and a nice way to get all the ballets at a lower cost than the original Decca SXL albums. 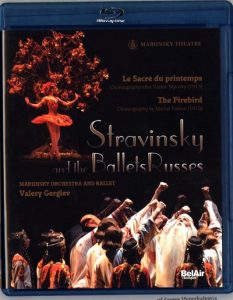 Although the vast majority of performances of these ballets are done in concert, either in suites or the entire ballets, they were all originally ballets.  The original choreography and costume designs of the Rite of Spring were thought to have been lost, but were rediscovered and in 2007, both the Firebird and Rite of Spring were performed by the Mariinsky Ballet (the successor to the Imperial Ballet) using the adaptations of the original choreographies by Fokine and Nijinsky with reproductions of the original costumes. The performances were captured on DVD (including bluray) and are very well done – a trip back in time.

After completing the Rite of Spring, Stravinsky made the decision to leave Russia and the Ukraine, where he had been first visiting and then living for most of his life.  His family moved to Switzerland in 1914 with his wife’s diagnosis with tuberculosis and the birth of their fourth and last child.  The outbreak of World War I and the subsequent Russian Revolution confirmed his decision to leave and Stravinsky did not return to his homeland until 1962.  During this time, Stravinsky began experimenting with a different style of composing, “neoclassical” which was based on the earlier works of the baroque and classical periods. One ballet he wrote was based on the music of Pergolesi, an Italian composer of the late baroque period. (Later scholarship showed the music was actually by other composers than Pergolesi.) It was called Pulcinella and its premiere in 1920 was conducted by Ernest Ansermet.  The choreography was by Leonid Massine who also redid the Rite of Spring. The costumes and set designs were by Pablo Picasso, who became a friend to Stravinsky. 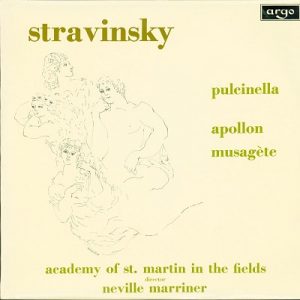 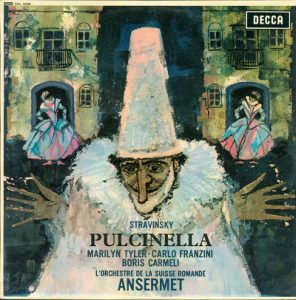 My favorite recording of this delightful piece is by Neville Marriner and his Academy of St. Martin in the Fields on Argo (ZRG-575). Argo is a subsidiary of Decca and this recording was engineered by Kenneth “Wilkie” Wilkinson in 1967.  It is a suite composed of most of the pieces of Pulcinella.  The complete ballet also includes voices, a soprano, tenor and bass.  A fine complete version of the ballet with voices is on Decca SXL6230) recorded in 1965 with Ansermet conducting his L’Orchestre de la Suisse Romande.

During this time Stravinsky was under severe financial hardship, being cut off from his home country and with the new Soviet Union unwilling to recognize the royalty agreements of the Berne Convention. However, he was able to find benefactors who provided him with a steady source of income.  Among them was CoCo Chanel, who paid for a new production of the Rite of Spring, and with whom Stravinsky had a brief affair.  However, the love of Stravinsky’s life, Vera de Bosset, came into his life in 1921. She divorced her husband and began to live with Stravinsky in Paris.  He continued a double life, with his wife and family in Switzerland and then rural France until 1939 when his wife finally succumbed to tuberculosis as did his eldest daughter the year before. Stravinsky was invited to give the prestigious Charles Elliot Norton Lectures at Harvard in 1940, and it was then that he finally married Vera.  With the outbreak of World War II, Stravinsky decided to move permanently to the United States, and he and Vera lived in Los Angeles, in the Hollywood Hills for most of the rest of his life. Stravinsky signed a contract with Columbia Records and recorded most of his works with the Columbia Symphony Orchestra in the 1950’s and ’60’s.  I have several of those recordings. I don’t find I enjoy them as much as the recordings I am recommending, but they give insight into Stravinsky as both a conductor and composer.  Stravinsky died at the age of 88 in New York City in 1971. His wife Vera died in 1982 at the age of 94.