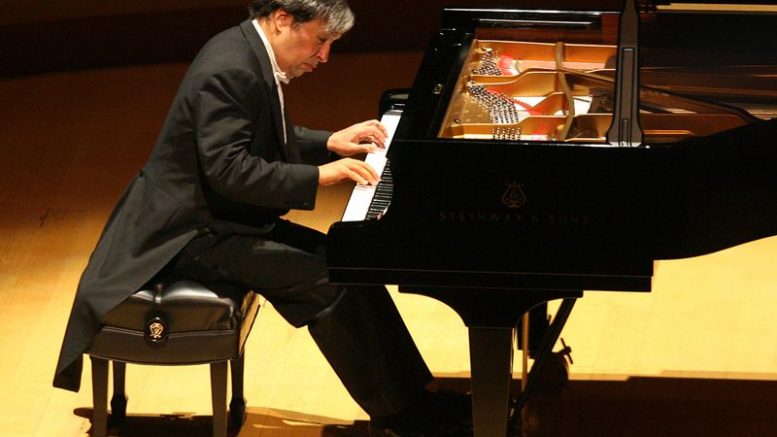 Royal Festival Hall (we were in row D left center) – Richard Goode is one of the great living pianists. He primarily plays the 19th century repertoire, with emphasis on Beethoven and Schubert.  This concert began with Bach’s 6th Partita and continued several Chopin pieces, including the Polonaise-Fantaisie in Ab Op61 (which we had heard the previous week by Nicolai Lugansky). The second half of the program was made of two Beethoven Sonatas, including Op101 in A and Op110 in Ab (one of the great three late sonatas).  Sitting so close (row four) meant that the sonics of Royal Festival Hall were excellent (they were terrible two years ago when we could only get rear balcony seats for Daniel Barenboim and could barely hear him).  Goode lived up to his reputation – wonderfully expressive and controlled playing.  My wife says, when you hear many young pianists, it is all about them, when you hear Richard Goode, it is all about Beethoven, or Chopin, etc.  For the past few years Goode has used music when he plays (I think it started about four or five years ago).  As usual, his wife, violinist Marcia Weinfeld, turned the pages.  Marcia was a schoolmate of my wife at Smith College, a couple of years behind her.  They both used to practice in Sage Hall, the music building at Smith.

Barbican Hall – (we were in Row P right center – 12th Row, since there are no rows N and O).  We heard Murray Perahia, another of the finest pianists of this generation.  Like Goode, Perahia plays classical and romantic era composers, and like Goode, he began with a major piece by Bach, the 6th French Suite.  It is in 8 movements, based on different dances of the baroque era.  Then came one of my favorite set of pieces, the four Schubert Impromptus, Op142 or D935.  All are delightful, with the 3rd most famous, a set of theme and variations based on a theme that Schubert also used for his orchestral piece, Rosamunde. After the interval, Perahia played the Mozart Rondo in a minor, a fiery piece, unlike most of his rondos and piano sonatas. He concluded with the great Beethoven Op111, Beethoven’s last piano sonata. The famed last movement (there are only two movements) is a theme and variations in C major, which follows the first movement in Beethoven’s key of doom and gloom, c minor. It is a feeling of relief and exhaltation. With Goode and Perahia we were fortunate to hear two of the three last sonatas of Beethoven, something very special.  Perahia is a musician whose focus is the music. Like Goode, there is no showmanship – he just sits down and plays. But what comes out is magic.  Perahia has had health problems in the past, but we have been able to see him several times, both in London and at home (SF Bay area) in the past few years. Unfortunately, this time we were too late to get keyboard side seats.  The sonics were very fine from our position about 2/3rd’s of the way back in the stalls (ground floor).  The Barbican is built with the first 5 rows flat and then a gap, and the rows following fairly steeply raked, so the sightlines from Row F and back are excellent.  The circle (where we sat for Uchida) is fairly far back, so there is no overhang for those sitting in the center stalls, where we normally sit.  In other halls, if one is sitting toward the back of the stalls, the terrace or balcony can overhang the area, causing part of the sound to be blocked.

Wigmore Hall – Nicolai Lugansky – Lugansky is a popular Russian pianist who won the top prize in the 10th International Tchaikovsky Competition in 1994 (he won the silver medal – with no gold medal awarded that year).  In his mid 40’s Lugansky is an elegant pianist with great tonal color and typical technical chops of a Russian pianist. The first half was Tchaikovsky’s Seasons, a rarely heard set of 12 pieces, named for each month of the year.  The second half was all Chopin, with a fine performance of the 4th Ballade to end the concert.  Most enjoyable. Wigmore has great acoustics, though with quite closely spaced rows, similar to flying coach on a legacy US airline.

St. John’s Smith Square – Pavel Haas Quartet – Beethoven Op127 String Quartet, Dvorak Piano Quintet in A (with Denis Kozhukhin piano). We were in the 7th row center of this former church that was heavily damaged during the London bombing of World War II. It was rebuilt and reopened in 1969 and was used as a recording venue by Decca Records in the 1970’s, typically with the Academy of St. Martin’s in the Fields, with Neville Marriner. We had attended a concert of the Philharmonia Orchestra about 20 years ago there, but until last week, we hadn’t been there since then.  This was the first full length concert by this young Czech quartet in London.  However, it was the third time we have heard them – the first two were in the past three years in northern California, where a local concert promoter who had discovered them in Europe has bought them over for a series of concerts.  They are energetic and very musical – one of the better young quartets (along with the Danish Quartet whom we also really liked).. The program was very engaging and enjoyable. The Beethoven Op127 is the most accessible of the late Beethoven quartets – quite melodic, but with much of the musical complexity shared with the other late quartets.  The Dvorak piano quintet demonstrates Dvorak’s musicality and gift of great melodies, equaled in the 19th century only by Tchaikovsky and Schubert IMHO.

Wigmore Hall – Our last visit to Wigmore this year was to hear the Razumovsky Ensemble, a chamber group with varying membership, led by Oleg Kogan, a fine cellist, who is a professor at London’s Guildhall School. We have heard the group before in London, though with different players except for Kogan. The program was quite varied, beginning with violinist Kolja Blacher playing the Bach solo first Sonata for Violin. He was bold and dynamic, with a very rich tone. It was not a HIP (historically informed performance) but one that was musically very satisfying. For the second piece, Kogan and violist Anriy Vyitovych joined him for the Beethoven String Trio Op9#3, a quite early work. The three string trios of Op9 were believed to be Beethoven’s early attempts at pure string chamber music, predating his quartets.  They were the only string trios that Beethoven ever wrote. Op9#3 in c minor, unlike much of Beethoven’s early chamber music, does not look back at Haydn and Mozart, but ahead to his later works, even hinting at the dissonances of his late string quartets.  Quite an interesting piece.  However, the second half of the concert was the real treat, the fabulous Schubert Cello Quintet. Scored for string quartet and cello, the second cello was Alexander Chaushian, the 3rd prize winner of the Tchaikovsky Competition in 2002.  Schubert’s two quintets, the Cello Quintet (sometimes referred to as the String Quintet) and the “Trout” quintet are two of his greatest compositions.  It was completed only two months before his death, and was not performed or published until 20 years later.  Even though Schubert was only 31, some believe he knew that he was dying and there is an autumnal quality to the music.  This is one of my very favorite pieces of chamber music.  The Rasumovsky Ensemble played superbly, a glorious conclusion to the concert.

Wigmore – two prize winning students from the Royal Academy of Music (the top conservatory in London). Lithuanian flutist Silvija Ščerbavičiūtė and Chinese-American violinist Luke Hsu.  Both played well enough, but the choice of repertoire was not inspiring enough for us to stay beyond the interval (intermission). All solo violin (Biber, Bartok) for example. Our only disappointing concert.

In this year’s visit, we attended 15 concerts in 21 days, allowing a few breaks from daily concerts (we have attended as many as 22 concerts in a similar period on previous trips.)  This gave us time to do other things, including taking breaks from doing anything other than walking around London.  London, though one of the largest cities in the world, is eminently walkable. Very flat terrain, combined with truly excellent public transportation (both bus and tube) makes getting around very easy.  Our timeshare is only a block from Hyde Park, where 500 years ago Henry VIII would gallop around on horseback, hunting his favorite prey. It is also very much a city that has been in transition.  Ethnically, it is one of the most diverse cities in the world, something that Londoners have embraced, even though it has meant traditional British institutions have given way to very different ones.  When we were first here for an extended time – almost 4 months in 1990, the only good food we could find was a local Indian restaurant. Now, there is a multiplicity of fine restaurants with cuisines from all over Europe and Asia and the rest of the world.  There are even popular chains like Nando’s featuring chicken cooked Portugese style.  We even have a two star Michelin French restaurant at the bottom of the building of our timeshare!  And the British cooking doesn’t mean overcooked everything.  History and tradition is still very important, given that Britain still has a constitutional monarchy, with the accompanying pomp and circumstance. How it transitions in the next few years, with Brexit, no one knows.  We will continue to visit annually, already having made our reservations for next year.  Classical music is still very much alive and well here in the UK. Hopefully, it will be a safe trip (as it was for us this year).