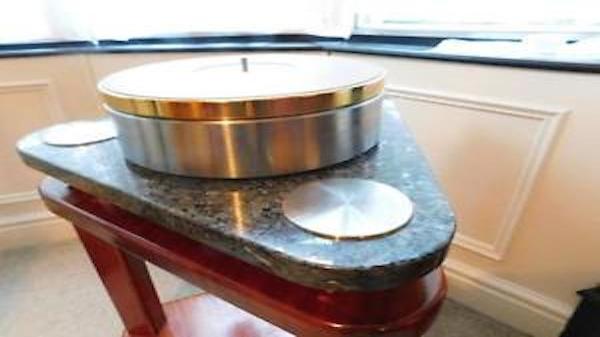 I recently compared the Kuzma Stabi Ref with 4 point tonearm to the Blue Pearl JEM with a Graham Phantom. For those who don’t know the JEM, as only 3 or 4 pieces were made in the UK, Audiocrack owns one with a Kuzma Airline and Lyra Atlas. Roy Gregory’s review in 93/94 in Hifi news said it “stomped” on the Rockport Sirius. He also rated it higher than the then VPI top of the line and Clearaudio master. It is a rare table with a 45kg (110lb) steel platter. 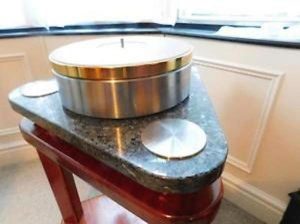 When I compared the two tables, the Blue Pearl JEM was clearly superior on all aspects of bass, slam, dynamics, separation, and soundstage to the Kuzma Stabi Ref. Difference was clear on full symphony like Argenta Espana, where the JEM just held the music together better. The only difference on the two tables was the arm (Graham vs Kuzma 4p). The JEM also had a much more rounded, almost pear bottom end. Both tables were neutral and not in the pretty sense like Thorens Ref or at a lesser cost a Linn Lp12.

On the JEM we used both the VDH Colibri platinum coil and copper coil cart. The Copper was more laid back, while the Platinum was super explosive. The comparison between the tables was done with the Platinum. The Platinum also had more real timbre, though some would have thought it a bit brighter.

We then changed the phono stage from NVO spa ii special edition to the Aesthetix IO Sig. The difference wasn’t as much as the above two, though Aesthetix had more gain and played complex passages with more separation, NVO had more tube like finesse. I recommended the IO Sig which was at a good price to Bill, and he swapped his BMC for it. I had previously not liked Bill’s analog, but now it is tremendous.

Special thanks to Emporium Hifi who has a great collection of used analog and amps, and who had set this system up in a small room yet with the Vivid Solistas and Anthony Gallo was sounding great.