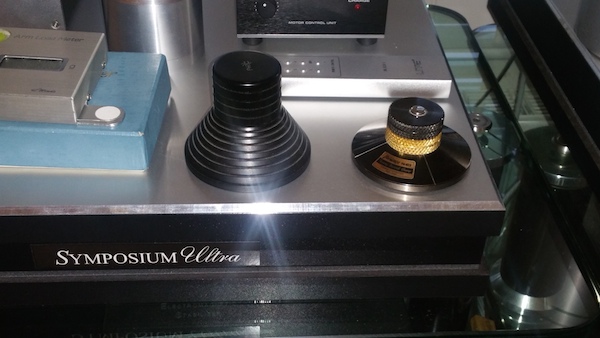 Around 15 – 20 years ago, Peter was a reviewer for Hi-Fi+, and has been through the Hifi cycle with most of the old guard in the UK. Back then, in a large converted dedicated barn (28’x22’x20′), he had a Goldmund Reference with T3F arm, Counterpoint SA9 phono, Vendetta research 2b, FM Acustics 211 phono, Audio note Japan M7 Silver sounds phono and ANsc step up; Counterpoint SA11 pre Jadis JA 500 and Sound Labs A2. At another point, he also had a complete Cello system; Performance II, loaded Suite, Palette, Stradivari Grand Masters. At the time probably two of the finest systems in the UK; with numerous iterations in between, which people like Roy Gregory and others would visit frequently as it was one of the reference rooms in the UK.

Now, after retirement he has scaled down temporarily, but still has an extremely musical vinyl based system in the living room. 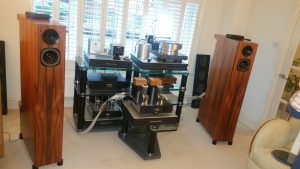 The Turntable was a Verdier Heritage TT with a ViV 10″ Float arm, and the speakers were the Hornings Eufrodite driven by 18w Horning Sati set amps with 520b valves. All with Nordost Odin and Valhalla cables. 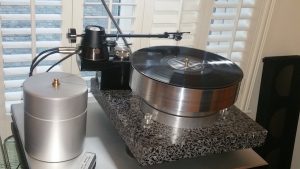 We started playing the Verdier with the Dynavector XV-1a (around 2k cheaper than the XV-1S) into the Lyra Connoisseur, then swapped over to the AN IO J into the Tron GT mm stage with the Kondo KSL SUT.

On the Bruch Scottish fantasia, I immediately felt the AN IO J was more rolled off, and for me did it not have the timbre that the other combination was creating. Having heard AN IO before and after discussing with Peter, I think I can attribute the roll off to the cart rather than to the phono.

On Winterreise, the piano sounded more clean and just proper on the Dynavector, rather than with the AN IO. Again, more to do with the timbre. I was not liking the AN color. This is consistent with my tastes. Peter likes both.

Where the AN might help is if your system is already bright and needs softening up. Do keep in mind that the amp was an 18w 520b, and you can also put 300bs in, in which it will get even softer.

On large pieces like Scheherazade 4th movement and Argenta Espana, both carts did fine in that system, which surprised me, I was expecting to like the Dynavector.

Comparing pianos on Rubinstein’s Emperor, just confirmed what I was hearing. The Dynavector also had more attack on each note, and was slightly forward as compared to the AN IO. The Dyna now makes it to my shortlist of carts to try if you are looking for a timbral, musical, detailed cart.

We confirmed what we heard by going back to the Dynavector after the AN IO. 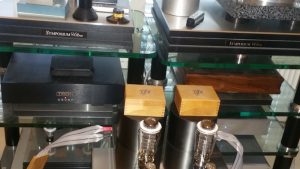 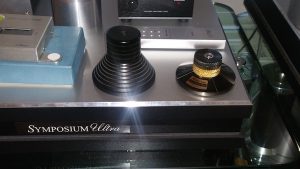 Peter’s strong preference is the Shun Mook clamp. His Harmonix is packed away.

With the Winterreise, the difference in having the SM clamp on and off was massive. The piano had more bloom and tone, and better midbass. The sound was more full, open, and emotional. With the clamp off, the sound flattened and lost tone and emotion. The Harmonix was a bit flatter, more forward, and not as full

With the violin in the Bruch Scottish fantasia, one could like both. The Harmonix had a bit more aggression on the violin.

The tonal superiority of the Mook clamp again shone through on Rubinstein’s piano. On Scheherezade 4th movement, the Harmonix seemed marginally sharper and the sharpness gave it an openness, but the presentation was flatter and had a more precision like sound rather than the tonal musicality of the Mook. The Mook was also providing better midbass and bass. The Harmonix was more explosive

Where the Harmonix can add value is if you have a muddied recording, it will appear cleaner than with the Mook clamp. But otherwise, both Peter and I preferred the Mook for better tone, bloom, emotion, midbass. On certain music you have the flexibility to take the clamp off.

I am interested in comparing the Mook to the Dalby clamp. It should be noted that these clamps do not work on all designs, e.g. suspended TTs.

Another interesting trivia I learned from Peter is that the Stevenson alignment is more suited to classical as it emphasizes control on the inner grooves, which have more of the crescendos. However, with the ViV Float tonearm, the setting is such that one does not need to align to Stevenson, Lofgren, or any of the others. Peter also has a Graham Phanton III 12” which I expect to go back to listen to when he sets it up.

Overall the system is very musical with a nicely layered soundstage, and very suitable for smaller rooms.