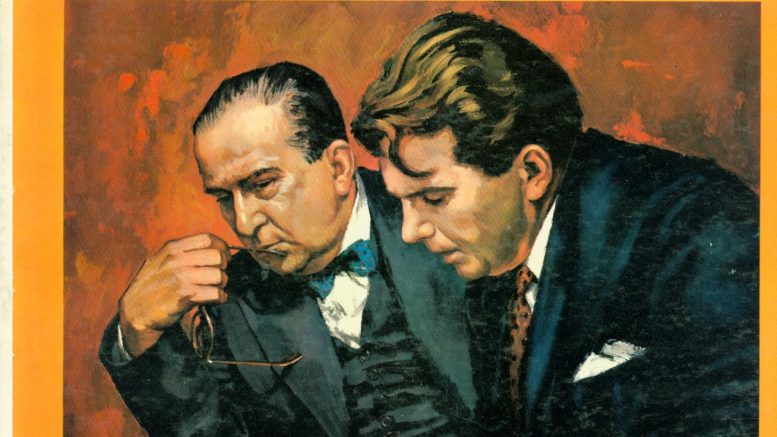 Brahms was a fine pianist, and his piano compositions are among the finest in the literature. His two piano concerti are among the most popular in both recordings and on the concert stage. They are very different, with the second concerto the most immediately accessible. It is also one of the longest of the popular concerti, lasting around 50 minutes in most performances. It also has four movements, more like a symphony than a concerto, and the only one of Brahms concerti which extend more than the customary three movements. It is very long compared to most contemporary and earlier concerti, over 50 minutes in many performances. Brahms wrote the second concerto over a three year period when he was in his mid 40’s, from 1878 to 1881, 22 years after writing his first concerto.  The second concerto is very tuneful and accessible to a first time listener. It is also not written like most concerti of the 19th century, that is not as vehicle for the solo instrument, but instead using the piano as if it were a second orchestra.  One can hear the piano as a solo instrument with the orchestra accompanying it, and then as the accompaniment for the orchestra.  The concerto begins unusually with a quiet horn solo, followed by the piano. The second, though designated as a scherzo (usually a fast, happy movement) is romantic, with a stormy development section. My favorite movement is the slow third movement which features two long solos by the cello at the beginning and end of the movement. Although Brahms did not write a cello concerto (which is rarely done) his use of the cello in both this movement and the Double Concerto discussed in Blog8, give this instrument more attention than most composers. The last movement, marked Allegretto grazioso, is a delightful, though complex, consisting of five sections which contain five different themes. 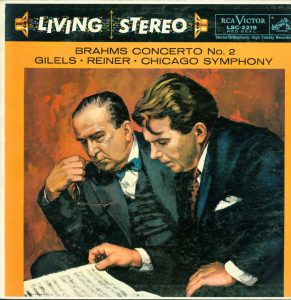 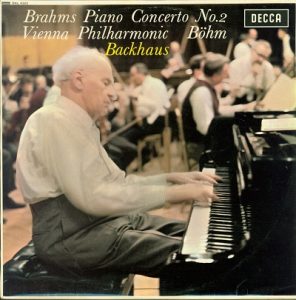 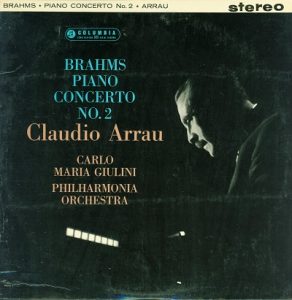 I have several favorites. I learned the piece listening to Rudolf Serkin’s version with Eugene Ormandy conducting his Philadelphia Orchestra in a 1960 recording. The Russian pianist Emil Gilels has two great recordings he did in the west. The first was with Fritz Reiner and the Chicago Symphony in an early stereo RCA recording from 1958 (pictured at the top), and the second is a DG recording with Eugen Jochum in the early 1970’s. Toward the end of his illustrious career, Wilhelm Backhaus recorded the second concerto with Karl Boehm and the Vienna Philharmonic for Decca in 1967. My friend, Decca recording engineer Mike Mailes was the engineer for this recording. He told me it is one of the best recordings he did in his long career. Finally the Claudio Arrau version with Giulini conducting the Philharmonia Orchestra on EMI in 1963 is one of the TAS Superdiscs. (TAS Selection is EMI CfP40034, original release is UK Columbia SAX2466)

Brahms first concerto was written over a period of four years, begun in 1854 when Brahms was 21.   It began as a two piano sonata and then evolved into a four movement symphony and then finally into a three movement concerto. It is a truly monumental sounding work, darker and not as easily accessible as the second. This darkness may well have been influenced by his relationship with Robert and Clara Schumann, which began the year before. Brahms was befriended by the Schumanns who were 20 years older than the young Brahms. Robert, in addition to his work as a composer, was an influential music critic who proclaimed Brahms as Beethoven’s successor. However, Robert had mental problems and was committed to an asylum in 1854 and committed suicide in 1956. His wife Clara was comforted by Brahms, whom she treated as a son, though Brahms’ feeling were more mixed. She and Brahms remained close friends throughout the rest of their lives. In the 1960’s the stormy first movement of the concerto was the featured music in the movie “The L Shaped Room.” 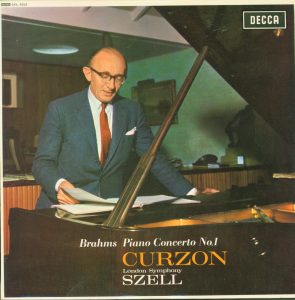 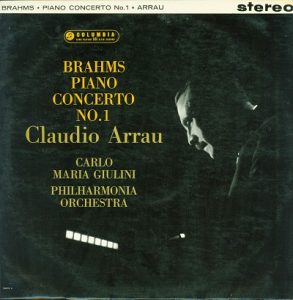 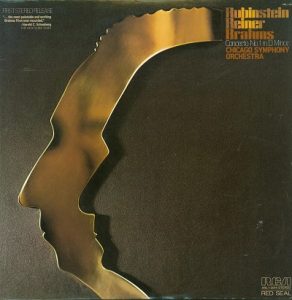 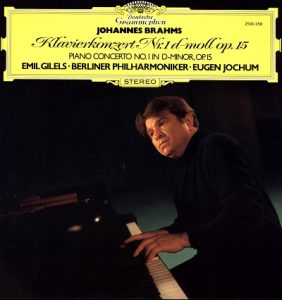 There is a clear first choice in my mind for best recording. That is Clifford Curzon’s version with George Szell conducting the London Symphony Orchestra in 1962 (Decca SXL-6023 pictured at the top). Excellent second choices are Emil Gilels with Eugen Jochum on DG, and Claudio Arrau with Giulini on EMI, another TAS Superdisc (both recordings are companions to their recordings of the second concerto mentioned earlier). Another TAS Superdisc is Artur Rubinstein’s 1954 stereo recording on RCA with Fritz Reiner. It was issued first in mono (LM-1831), and was not issued in stereo until many years later, in 1977 (RCA ARL1-2044) In the 1990’s Classic Records reissued the stereo version, but this time using the original catalogue number LSC-1831. The sonics are very fine for such an early stereo recording.