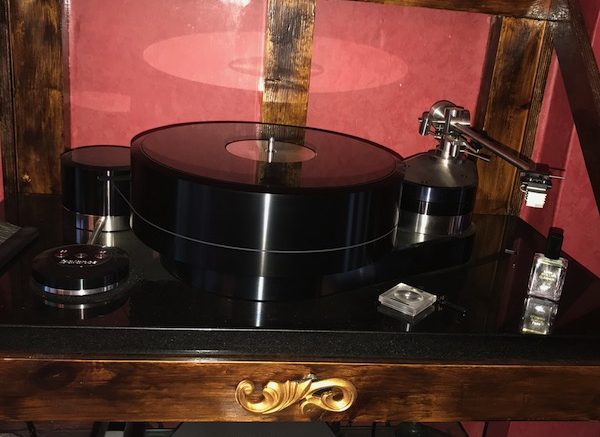 I first heard the Brinkmann Balance (BB) with Jan Allaerts Boron mk2 and the FM Acoustics electronics with the big Zellaton and the Stenheim Alumine 5, as reported here. I then decided I would break down the elements of the analog set up, given it was one of the top analog set ups I had heard. I bought the Allaerts, and then compared the Allaerts Boron mk2 to the Allaerts Finish MC Gold, Top Wing Red Sparrow, and a bespoke cart (report still to be published). I also heard the FM 123 with Art 1000 and  the 122 with the Miyajima Madake at Vertere’s.

I then decided to go overboard on the balance. I heard: 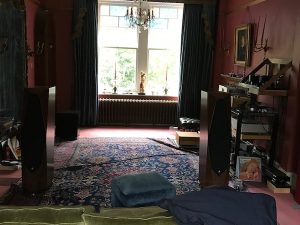 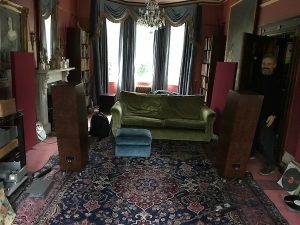 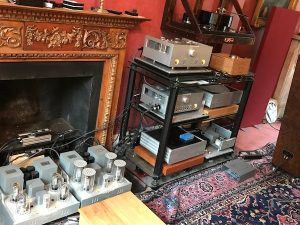 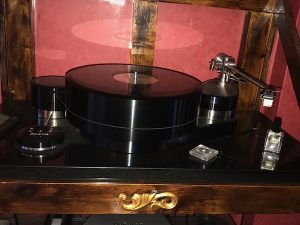 1. Howard’s system is set in a 30*16 ish room. This is the best Avalon system, and one of the best mid-sized cone systems I have heard. He has pulled the speakers 2/3rd into the room, sits extremely close, and crosses over to B&W subs at 40. He sits extremely nearfield, getting his room reflections out of the equation, and the stage gets thrown back, with an excellent, smooth bass response. No crossover confusion, no bass boom or lack of bass, no disparity between tops and bottom as often with cones. Howard listens to a fair amount of classical, moved up from the Lagrange (preferred the BB much more). We played my LPs, followed by some choral work using Howard’s LPs. I was surprised to note how easily the Allnic was driving the Avalon. Possibly because we were near field. Also, I cannot say what would happen if we drove them with VTL or Vitus. I have heard Eidolon with Devialet and CJ, and they did not sound as good. The room positioning and sub crossover were key here.

As with the Zellaton system at Audio Arts, I noticed a linearity through the top, mids, midbass and bass, and a quiet but composed authority. The Brinkmann does not seem to add or take away anything, and is neutral, warm, and rich (yes my neutral does have a warm and rich bent). Piano notes are clean, stable, firm. Compared to the Brinkmann, other belts I have heard like the Linn LP12s, Verdiers, and Raven have been more laid back. Not that the Brinkmann is aggressive or forward….it is, for lack of a better word, balanced. In fact, the word is appropriate for the table and for Howard’s system. Howard’s system does not seem to be cuddly close, distant, the bass does not boom, it is plentiful, and the stage is right.

Howard replaced the Brinkmann arm with an FR66s, and uses the Arche headshell with Decca London and with the Koetsu Jade with the diamond cantilever. He reported that headshell made a significant difference as did an impedance controller for the Decca cart designed by Vertex AQ of the UK.

Since Howard lives in London, I was able to revisit him to do a compare of various carts on the table to verify my observations. The Koetsu, FR 7Fz, and the SPU Synergy had more weight, bass, and authority than the decca, with the SPU a bit less detailed but extremely enjoyable. The Koetsu had the grandest scale and stage and dynamics and drive, most evident on the Ode to Joy (Solti, Decca). This is only the second time I have heard a Koetsu sound good, the first time also being on a fidelity research arm (FR 64s) at Shakti’s. The FR cartridge clearly had a synergy with the arm as it seemed to be just glide over the records, and sounded extremely balanced. With Winterreise, Lalo Symphonie Espagnole, Beethoven Emperor, the FR  and the SPU held their own against the much more expensive Koetsu.

2. Denis’ (dcc on WBF and Audionirvana) has a different system to Howard’s. The speakers are D’appolito, the preamp and amp is all solid state krell. Details of his system are here. 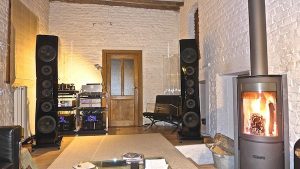 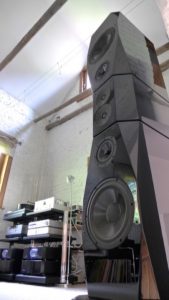 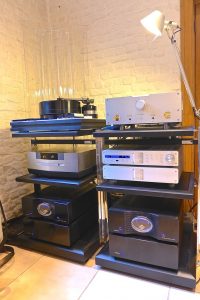 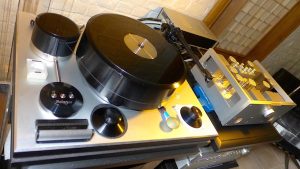 Like Howard, Denis is primarily a classical enthusiast, with well over 2000 LPs and now a growing collection of tapes with his Studer A80. Around 20 to 25% of his collection is baroque, so Denis has put up a detailed list of his recommended baroque LPs here. He has written detailed notes and descriptions there, so strongly recommend reading the list.

I started the session with listening to a couple of CDs on his TAD CD player, then streamed off his Aurender with Ken Lau LPS into his TAD, and then moved over to the Brinkmann. The increase in the density of tone and in the soundstage with the BB was most obvious. We then played my audition LPs, and followed this up by playing a few LPs of Denis’ list. We heard LPs from Fone, Harmonia Mundi, Telefunken, and Philips, apart from my own Deccas, Speakers Corner, RCA, Analog Productions. I found the relatively low cost Philips LPs to be extremely natural sounding with great musical pieces. I have already ordered a few of the LPs I heard at Denis’, and you should too. 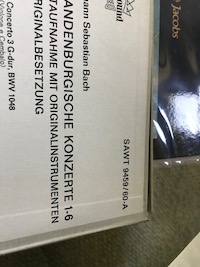 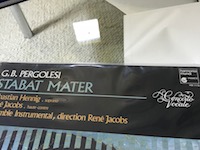 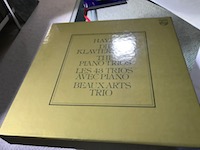 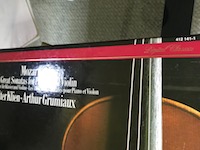 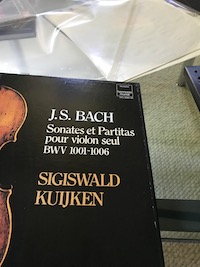 We were able to compare some pieces directly with the LP and tape. I also heard some other tape from Fone and Horsch, etc. The dynamics and detail on the tape, the hit on the leading notes, was higher than on the Brinkmann. At no point though did I feel I need to pay up for the tape. I would be quite happy to own the Brinkmann. The difference between the digital and the Brinkmann is higher, I would need the Brinkmann. But clearly if there was one weakness, it was that leading notes can be more dynamic on this table as compared to the tape – or maybe it is unfair to compare to the tape. I also do not know if that is a Proteus + Allnic characteristic. But otherwise, across all my demos and here, the tonal colors, body, highs, mids, midbass and bass, have all been equally satisfying. It also retains all these characteristics as the music grows complex and expands, and it keeps the same composure across the expansion.

3. The characteristics of the Brinkmann Balance were easily distinguished in this TT compare with Techdas Af3, LaGrange, Monaco and Sp10 mk2 here.

Conclusion: The Brinkmann has excellent tone, among the best, full sounding, organic, that works from the midbass and is linear and extended both up and down. There is no thinness in the midbass, no rolloff or dark sound or etchiness in the highs, no lack of bass, excellent flow. It will not be thin, lean sounding, overly fat sounding, muddy, sluggish. It won’t be in your face, forward, and will not have any mid bass humps. The only drawback I can think of is that it has only one arm. A newer model has two. The arms can be changed quickly. It is not as zippy or vigorous as some, but that does not mean it is laid back. And in most cases the ones I am referring to have that punchiness as a color. It would be interesting to mount a Schroeder LT on it over the longer term, but for now a Brinkmann Balance with a Brinkmann arm, RoNT, is at the top of my TT list factoring its price sonics ratio. It is one of the finest TTs I have heard, and those like Kodo Beat, NVS, Vyger, etc could be better at a much higher price point. It is also known to have excellent service, and works fine with a variety of carts.

All the Brinkmann owners above recommended that the tubed power supply – RoNT – Is a must. Fremer’s review suggests the same. Please read his original review and his follow up, and his compares to SME, Simon Yorke, and Rockport Sirius III. In his Bardo review he has mentioned that he was about to buy the Balance when the Continuum came along.