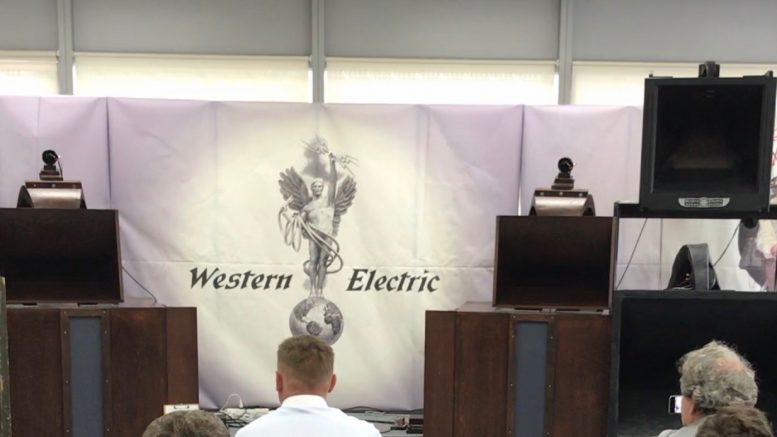 Please use headphones or stream to a speaker. Videos are short, but you will probably not have time to go through them in one setting, so come back for a later listen. There is not much point in just scrolling through this report by reading.

This write up has many brief videos, quite a few on western electrics, followed by other horns. Some other videos or verity audio, Engstrom (with verity, Goebbel, kharma), some videos of Michael Fremer’s demo of the SAT direct drive TT in the CH marten room, and if nishikawa San demonstrating the techdas AF0 in the CH vivid room.

Brief mentions of  other rooms. Videos were taken randomly on iPhone

The Western Electric – The wooden horns are not playing, they were the replicas made by GIP. The ones on the outside are the ones that are playing. The top one is a WE 22a sheet metal, with the original WE 555 driver made in the 1930s. The bottom one is the paper mache 15a like with a GIP replica 555 driver. This was made by their subcontractor during the recession in 1930, and these two played as an unit in cinemas, with more money put in them at the time then the space program to make talkie movies.

A 597 tweeter has been added to extend the tops.

The sub crossed over at 40hz with DPX (the rest of the speaker is crossoverless except for the tweeter) is made of an open baffle with 8 515a drivers. The ports are so that the back wave does not cancel out the front wave.

The amps are Silbatone 6w 205C with Thomas schick’s TT and a VDH Master Signature Stradivarius (third year in a row). This TT is a Lenco motor driving a passive motor. This is easily the best analog on demo at Munich, by far. The VDH is customised each year to the Schick. Schroeder also played his tiny idler with the Schroeder CB and the Stradivarius. There are two Strads on the Schick, each with a different headshell.

The system is so far better than anything else out there it is not funny, so have many videos here for you to check out.

The one above is played with the horns on the inside, the wooden ones, which are replicas made by GIP, costing around 120k Euro. They were playing with the 20w hybrid VT2 amp

Here’s JC Morrison with his bass speaker, which is 8 Altec 515a drivers in open baffle, the ports allowing for the back wave not to cancel the front. You could make this with 8 PA drivers (more compact) at half the size. The bass panel crosses in at 40 Hz with dbx and is driven by a Marantz. 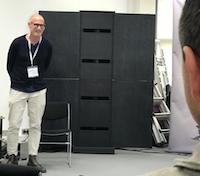 Here’s back to the originals

Meanwhile, a bit of fun for those kids who need education, because ears are just a hole in the….

Kronzilla Blumenhofer – this model was sounding quite impressive and is also small, narrow, pretty looking, good for average sized rooms.

These were sounding quite good, I think they have incorporated the wood tone of the 120k horn from two years ago and have better integration. I have heard their older 28, 32, and 38 before and never preferred them, but these were real good.

The Best Value system goes to Verity Amadeus with Zesto electronics (Phono 6900 USD), and Merrill TT with the Benz cart. Zesto KT 88 Eros 300 amps (called 300 because 150w per channel). I have compared Zesto phonos with Allnic and Trulife before, and at Bob (Rhapsody in NYC), the Techdas AF3 and Af1p play through Zesto phonos. I also owned Verity Leonores, and have heard them with Jadis JA 100, NAT Magma, VAC 30/30, and Pass class A 100w. This is such a natural sound. Veritys as such have a great natural midrange though could do with more midbass oomph. I would like to hear a pair well crossed over to subs

Since you heard the Verity Zesto system above with the Royal Ballet recording, here are a couple more systems playing the same

And the VAC Von Scweikert

The Engstrom amp seemed to change rooms for the better this year. Above you heard the T100 valve

This is the Engstrom 300b XLS with the Kharma – only time I have heard the Kharma sound natural at Munich. Here’s playing Reiner Scheherazade Living Stereo SACD through the Wadax. Could have done with a bit more drive and separation though

When I went to the Engstrom Goebbel room, Jon Valin was evaluating the sound. This is what he played for his demo

Speaking of which, the dCS never sounded good in the Silbatone room next to the amazing analog for the last 5 years. This time, at one point, they were playing digital when I assumed they were playing analog. I walked up to check, how did dCS manage to make such a good sound? Turns out they replaced dCS with a dac that Silbatone built. The basic model is 10k Euro, this middle model is 30k Euro, and the top one is around 50k IIrc.

Here’s Kondo trying to drive Kaiser to produce an anemic Beethoven 5th (which on the phone recording does not sound so bad). These speakers need more power. Kondo lovers should get horns.

The two most experienced people with excellent ears that I know, Gian, and Pietro of Yamamura (you can do a find on their systems on this blog if you are not a forum reader), rate these Chinese horns from ESD acoustics to be the best along with the WE at this show

This is a 5-way horn with each channel having SS monoblocks on it. Considering this has been set up in a small room with no time, that makes sense. Add a valve phono and it will be perfect. Excellent separating, coherence, and integration.

The Diesis audio was quite musical with an SS integrated at Marriott. I unfortunately do not have a video for you. The costliest model is too expensive, but the next ones might compete with the Blumenhofer shown above for a speaker of a similar size. Following are three videos, I did not shoot them, the US distributor Rhapsody Audio did, and these are from his youtube channel.

The AER room with Riviera 50w hybrid monos sounded nice though I prefer the Riviera on a bit tougher cone speakers while with AER I prefer very low watt SETs. You will find other mentions of Riviera on this blog, another recommendation from Gian and friends in Italy, and there will be further deep dives into Riviera, Engstrom, and AER. In the AER room the LDMS server was preferred to both the CD player and the analog there though only in a brief show demo with different recordings. Again a further deep dive into LDMS is required at some stage.

I did get to compare VDH Crimson and Master Signature Stradivarius on one record of mine, and I thought the Master Sig was more natural. Unfortunate, because it is more expensive. Very minor difference. But it seemed to have a magic that continues to make it my favorite cart. The Diapason Dynamis did sound promising for cones.

The Thomas Mayer 845 with Elrog valves and his 801a preamp playing with Pure Audio Project Quintet 15. With these type of open baffles at 16k, OMA Monarch at 100k USD (https://zero-distortion.org/oswald-mills-oma/), and DIYs like BD from Bert at 35k euro (picture below), there is a range of sensitive, efficient, open baffles that create a planar like stage and transparency, with backward layering and stage width, but the flow and tonality of SETs. Therefore, I do not see any reason to buy a stat or a ribbon type planar that is expensive. Quads, Logan hybrids, and the smaller Maggies are indeed incredible value, and restored apogees with Full Ranges priced at 18k Euro from Henk, and Duettas, Divas and Scintillas till 12k Euro, are among the best speakers for a sound alternative to horns. But pay a bit higher, and you can get this planar like stage from the sensitive horn like speakers mentioned above. Bass and oomph needs to be improved with these but that is an easy thing to fix. The below system could have done with a bit more oomph and midbass, but it is a difficult room and here’s Henryk Szeryng

For me, this was the best analog on show, with the VDH Master Signature Strad going into the Silbatone MC

Here’s a talk by JC Morrison of Silbatone introducing the system. I thought the talk was pretty interesting

There is not much difference between what billionaires like Cheung play and what good DIY guys do. So audiophiles, if you still have the bustle in your hedgerow, there is time to, in the long run, change the road you are on.

Be the first to comment on "Munich 2019 Video Coverage"