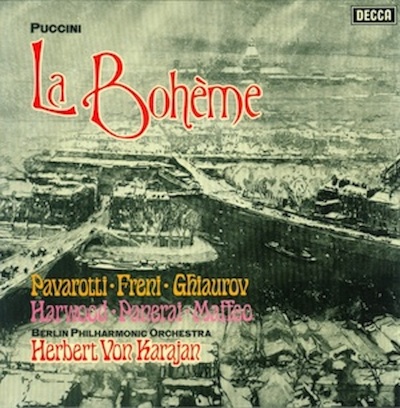 Many people find their first introduction to grand opera through composer Giacomo Puccini, who wrote his major works at the turn of the 20th century. Four operas are particularly well known and loved – La Boheme, Madama Butterfly, Tosca, and Turandot. All are immensely tuneful, a trademark of Puccini, and the plots are all quite simple and easy to follow. As with much of grand opera, the stories are some variation on girl meets boy, some conflict occurs, and girl dies. The male lead is always a tenor, and the female lead, a soprano. The language is Italian, with its plethera of long vowels particularly at the end of words, the ideal language for singing.

My recommendation for novice opera listeners focus on the greatest tenor of the last half of the 20th Century, Luciano Pavarotti, whose recordings of the four operas with Decca/London are all highly recommendable. Two of the four are even audiophile choices, members of the famed Super Disc list from The Absolute Sound, chosen by HP (Harry Pearson) himself.

Three of the four operas (all but Turandot) partner Pavarotti with his childhood friend, Mirella Freni, one of the great lyric sopranos of this era. They were both born in Modena, Italy in 1935, and both of their mothers worked in the same cigarette factory. The four Puccini operas were staples of my childhood, where my parents would play opera recordings, particularly these four operas every Sunday morning in lieu of going to church.

I’ll begin with my favorite, La Boheme. Boheme had its debut in 1896, under the baton of the 28 year old Arturo Toscanini, who had a life long connection with Puccini. It has remained one of the favorite operas ranking 3rd, below Carmen and La Traviata, and just above Tosca and Madama Butterfly (of which I will write about in later blogs). Interestingly, Puccini has three of the top 5 (or 6 most performed operas), with Mozart having three in the top ten (Figaro, Don Giovanni and Magic Flute), and Verdi having two (La Traviata and Rigoletto). 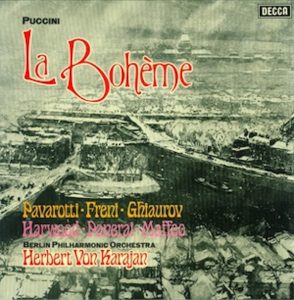 I was very fortunate in the fall of 1967, having arrived at UC Berkeley for graduate school, to be given a free ticket to the San Francisco Opera from a fellow grad student who could not go to the opera that night. It was La Boheme, starring, in his official American debut, Luciano Pavarotti, and Mirella Freni. Of course, I had no idea who this quite large (but not yet overly large) tenor with a magnificent, fluid voice was, but I knew he was very, very good! It was five years later, that Decca, with Herbert van Karajan conducting his Berlin Philharmonic, recorded La Boheme (Decca SET565-6) with Pavarotti and Freni. It was released in the US under the London label (OSA-1209). 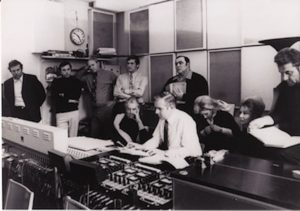 This photo, from the Decca archives, shows the Karajan sitting with producer Ray Minshull (wearing a tie) in the recording session. The cast and Decca engineers are standing behind. Pavarotti, stnds in the middle, with Mirella Freni, leaning forward, to his immediate left, and American mezzo soprano Elizabeth Harwood next to Freni. 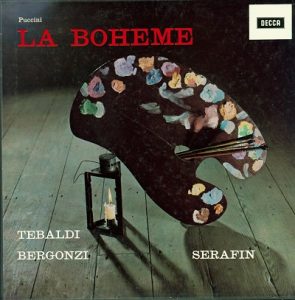 Two other fine recordings of La Boheme are first, the one I grew up with, another Decca recording, this time featuring the great Renata Tebaldi as Mimi. Tebaldi was Decca’s main soprano for the extensive Italian opera repertoire for 20 years, beginning at the dawn of the LP era, around 1950. In fact, Tebaldi would record many operas twice, first in mono, and then again in stereo (Decca SXL-2170-1).  Joining Tebaldi in the cast are Carlo Bergonzi as Rudolfo and famed opera conductor Tullio Serafin. 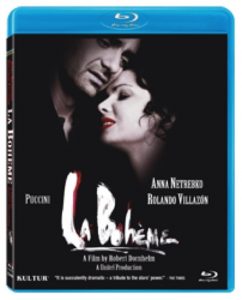 A modern recording on DVD (and Bluray) is a film of La Boheme starring the pairing of Anna Netrebko as Mimi and Rolano Villazon as Rudolfo. For those who want to both hear and see, this is a real treat.

More to come on the other three Puccini operas.