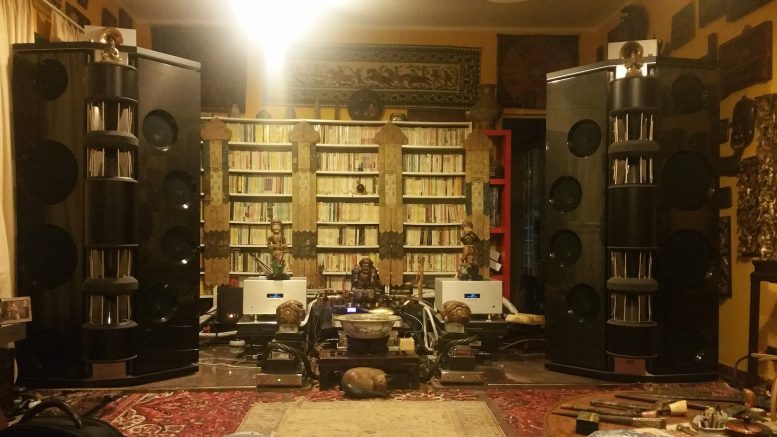 Here I will share you my experiences from my “Wait, what’s that – oh wow” tour.

I had planned this trip to Detlof’s to compare the Techdas and the Kronos, and was expecting to a see a slightly bigger than normal German Physiks speaker with a couple of Lamm M2.2s

However, when I reached his place, the first thing that struck me other than the size was the complexity of the speaker. 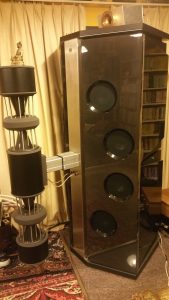 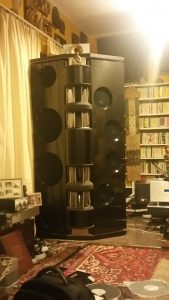 As you can see, it has 3 main drivers, the circular bass panel facing inwards to the other speaker is the midbass, and the ones on the outside are for the bass. Irrespective of how you position your speaker, they will point towards 3 different directions

As for the Lamm M2.2, it took a while for me to understand what was going on here even though I could see the below in person, so take your time while viewing a pic over the web.

In case you have lost track by now, that is 10 mono blocks. You see them with Stealth Cables on Synergistic Research platforms 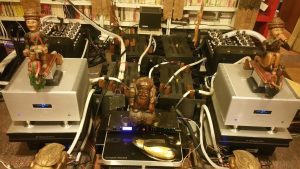 Behind the main room sits his front end room, which had the MSB dac, fed through the Beast (a streamer), and the Techdas and Kronos. We started listening with digital, which he said was the Beast streaming through to the MSB. I was randomly picking up classical, operatic vocals, and the mids astounded me – probably the best I have heard. It is transparent like a stat and an MBL, but full bodied and dense, and those mid bass drivers and the mids omni driver position it in 3d between the speakers. Just more real. At this point, Detlof told me he was struggling to rip my CDs, but he could play the CDs directly through the Zanden CDP/dac combo.

What’s that? You have Zanden too? Oh cool 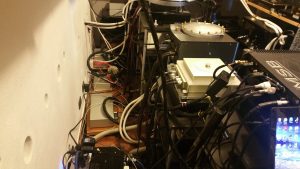 An hour later Detlof had managed to sort out the rips onto the NAS, so we could play it through the MSB. We played, as usual, digital of Bartoli, Bach cantatas, which have chorals, vocals, Oistrakh’s violin on digital, and Scheherazade.
Both of us agreed that on male and female vocals, there was not much to choose between the Kondo and the Lamm. On chorals, Kondo was more resolving, sounded cleaner and spotlit. Lamm sounded denser, with more in the mid bass, and sounded better on the Oistrakh due to the violin having more body. The Kondo had more space and air and dynamics. At this level, though, we are cherry picking differences in the spirit of audiophilia

We then compared the Zanden to the MSB using the CDs of the same files that we had ripped. We preferred the Beast + MSB combo on all fronts. The MSB had more bass, more dynamics, more body, and was resolving mass strings and complex music better. The Zanden had some prettiness in the highs and the mids. Detlof primarily listens to his MSB when he is not listening to vinyl.

With that, we moved to the Kronos. Now, the Kronos and Techdas as TTs cannot be compared in this set up, much as many of you would like to know the differences. They are just different set ups. The Kronos has an SME v12 and Goldfinger cart going through a Lamm LP1 signature. The Techdas had a SAT arm(which replaced the Graham elite) with a Kondo IO gold going through the Kondo. 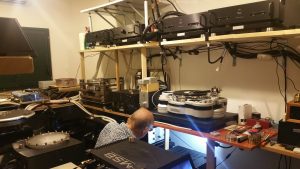 Overall, the Techdas set up sounded more resolving and dynamic with greater bass, but Detlof did mention his Kronos was not sounding good today as he just had his SME arm modded. And that is the case with analog. Some days the stars do not align and it does not sound right.

Once when we were changing LPs, I rubbed a valve, a genie appeared, and there was also a highly tweaked Goldmund reference going into an ARC Ref 10 phono.
I then looked around and said, wait what’s that?
Oh that is the Zanden phono, 1200 mk3, said the genie.
Oh wow. And what’s that?
That is the Wavac phono.
Oh wow

Unfortunately, the ARC shut down on us. And it is not easy to play the zanden or the wavac phono in place of the Lamm or the Kondo.

So overall, how is the system?

The mids are fantastic as I said above. The bass and density and fullness is perfect. This is as good as a system can sound with the room restrictions. Yes, if one had a much bigger room, you would get a wider, and deeper soundstage, with bass booming down. Like the Apogee grands, the bass panels are tall and large and fire across their height, not just from a woofer section below.

The speaker comes with an external crossover, and Detlof uses a professional tool called DBX to map the crossovers. He can easily set and swap and adjust to the music played and the component being used. I asked him if he built this up gradually, one amp at a time. No, he always wanted to triamp, so he went all in with a big bang and set the amps in 3 months. Of course, triamping is for younger people with less energy, so he quadramped.

Detlof is the perfect host. At over 80, he is full of energy, and since his preamps do not have a volume control, he keeps crossing over from the seat past the system to the other room and back. He leaps across all those wires, bends down to fix things, tries some DIY stuff, is trying to make power cables for his own challenge. After dinner the audiophile curse hit and there was a blackout. But after putting the generator on, he did the trouble shooting of all the NAS issues, got the Beast reconfigured, and we started playing again.

Detlof loves playing with his tweaks, so his components are all on Synergistic Research isolation bases, Walker audio feet, and Entreqed, with Stealth cables looking like Pythons carefully winding through them. He has damping on all his components including the laptop. He also has a Tripoint on one of his phonos. He knows some of his tweaks work less or not at all as compared to others, but for him, and rightly so, it is all about the fun of playing.

There is not much you can do to this system. It is immensely enjoyable especially given that Detlof and I share similar music tastes – he loves his strings, opera, piano. The piano on Rubinstein Beethoven Emperor was fantastic.