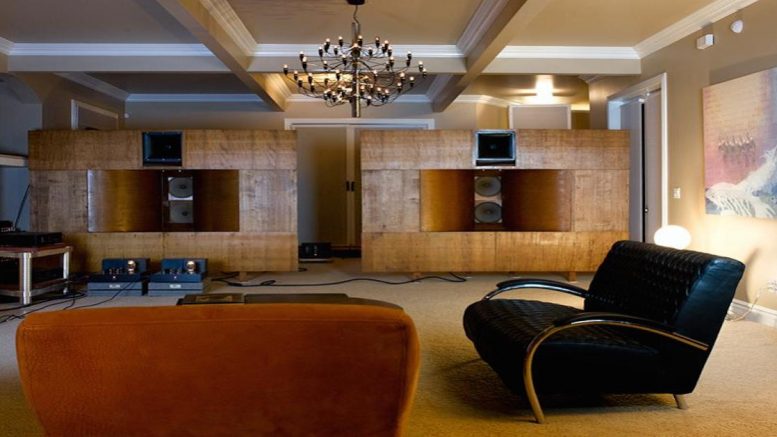 I landed at his place Friday afternoon, and stayed till Sunday noon. Over the 48 hours I intensively made him swap around his TTs and cartridges, and splendid host that he is, he did it without a murmur. 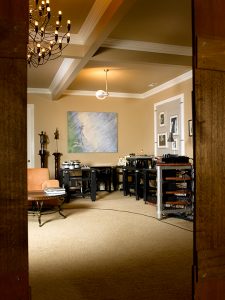 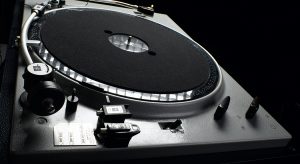 He has bypassed the internal phono

Thorens reference, the most musical of the lot 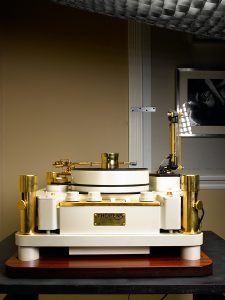 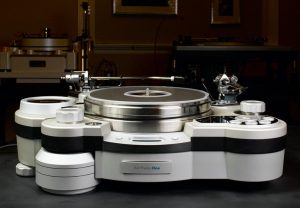 EMT: We started with the EMT 927F, which was loaded with the EMT cart on an EMT arm, and a Neumann DST-62 on a SME 3012 arm. David prefers not to use the EMT phono and uses the Lamm, and he has it cut for the SME arm. C

DDK prefers the Neumann, in fact Neumann’s are his favorites, but on Schubert’s Winterriese, on both the vocals and piano, on Beethoven’s Emperor, and on Bruch’s Scottish Fantasia, I found the EMT to have a more fuller sound than the Neumann DST-62, and preferred the EMT. The DST-62 had more extension but was thinner sounding to me, though DDK considered it more natural. He agreed with my fuller sound impression, and this impression would be further reinforced over the next 2 days as we moved through other music.

American Sound: However, when we switched to the American Sound, The Neumann DST (not DST-62, which is the later version) jolted the system to life. The top and bottom frequency extension was much higher and the sound was fuller as well. It was the best of both the DST 62 and EMT. The AS was also the most dynamic and lively TT of the lot. It seemed to have a fast rhythm, and the attack on piano notes was more real and lively. It had 3 SME 3012 arms, and we compared the Neumann DST with a Ortofon SPU from the 50s, and a Koetsu Rosewood.

We played RCA Victor Arthur Rubinstein’s Beethoven’s Piano Concerto 5 (Emperor). This was the best I have heard a piano rendition. Notes just floated through, they seemed crossoverless though the speaker has crossover. The piano had a full body, and authority on the top and bottom. The left and right hands could be visualized clearly.

Till now, I had been like a kid in a candy store. I wanted to try everything in one sitting, and my A/B mindset had made me uneasy and restless, with so many toys to play with. However, by now, I had started sitting through the music, asking David not to change. I drove David crazy over the two days on how many times I kept playing the Emperor, for long periods. This was the best rendition of the piano along with the Yamamura and the Silvercore horns.

SPU vs Neumann: The SPU, while lovely, was not in the same league. However it is a steal for the price, and the SPU was to be the common cart we would use to compare the AS, AF1, and the Thorens Ref, due to set up ease.

Techdas AF1: We then moved to the Techdas AF1, where we compared both the Shure and the SPU. I thought the Shure was lovely, but the SPU was better, so I stayed on the SPU. I have heard the AF1 many times in different rooms at Munich, at Steve’s and briefly in another set up with Vandy 7s.

As Audiophile Bill and I discussed after Munich, the AF1 usually had a sound we both liked – it has a fatter mid bass. However, I didn’t get this at David’s. David explained that the fatter mid bass comes from an aluminum platter, while he has a stainless steel platter, that is more neutral as he does not like any coloration.

I have always enjoyed the AF1, and thought it to have weight and dynamics, but in this case the AS was well ahead. Unfortunately there are only two AS TTs around.

Thorens Ref: We then moved the SPU to the Thorens Ref, which was the prettiest looking of all. As soon as we put on Winterreise, I thought the TT had more musicality than the others. There was more decay, and something drawing me in even more. Both vocals and piano were lovely. As I continued to play Bruch’s Scottish Fantasia and other violin concertos, there was no doubt that for me, violins and strings and vocals were making this the TT of choice.

How would it do on full symphony? Well, I put on Scheherazade and conducted all 4 movements in one sit (By the time we were through, David’s ten year old daughter had joined us downstairs and was humming the tune along with me as the music played).

Pictures at an exhibition was also played all the way through from the first movement to the Bydlo. Then I put on Mahler 3. For those of you familiar with Mahler 3, the first movement is 40 mins, and we played it through. There is a lot of suspense in this movement, as if something is about to happen, and then there are teasers, but the takeoff happens pretty late. It also has a lovely trombone, and the Thorens was handling all of this brilliantly. I always thought this was a tough symphony to enjoy indoors on a system, but this system was making it immensely enjoyable.

However, then we put on the Emperor Piano Concerto. All of a sudden, the TT failed us. The piano notes just didn’t have the top to bottom authority, and seemed to be floating aimlessly. We then moved to the AS with the same SPU, and the attack and authority and body was in another league. Though I did not prefer the AS with the SPU as much on other music.

What does all this mean? It just means that there is a reason David has all these TTs. There is no clear winner and each one is a like a different conductor. I thought the winners were Thorens for musicality and AS for weight, dynamics, and authority. The EMT was also very musical and had a larger stage, though that larger stage wasn’t that important in this comparison as all these TTs have a large stage, and so do ddk’s speakers. The AS seemed to time things on a dime, while the Thorens seemed to pause to allow time intervals.

The other comparison we did was with the Koetsu Rosewood and the Neumann DST. The Koetsu had a good fullness in a smaller range, but the Neumann was the easy winner. The left and right hand of the piano, the modulations of the notes and the vocals, the hardening and softening of the voice, were all more distinguishable on the Neumann. This Emperor became my favorite LP to AB those systems.

How do the speakers compare to the Western Electrics. Both these speakers are similar to each other, in a way that they make you forget hifi. Music floats through them, through giant mouths, and fills up the room so that there is music everywhere, no matter where you are sitting. The midrange is delicious. I have heard the WE with exotic 300A valves, each valve costing $15k, on 6w amps, while these were 30w ML3s. The bass of the Bionors and bottom extension is better than WEs, and top to bottom it is a much more homogenous speaker, and each WE sounds different depending on whether you use GIP, WE, or Line Magnetic drivers. David has subs at the back below 60hz, but you won’t know they are there until you see them. David attempts to remove all hifi artefacts from the system, and rightly so. One does not analyze or tickbox hifi attributes, but allows the music to float and to com

Piano is the best I have heard with the Yamamuras, we lost count of the time I melted on Emperor, and then pulled out Moonlight Sonata. Frankly, most hifi makes piano unlistenable, and I try not to listen to the softer notes and just go for something that sounds good on it.

David also made a brilliant currywurst and a barbecue steak over those two days, and his lovely wife who is Japanese made a donburi which I throughly enjoyed. David is intense even with his other interest, including food and politics, and is now intensely digging up his ground to change wires underneath the soil to see how it affects grounding. He has multiple storerooms full of hifi gear, mainly vintage, so there is years of experience visible right there.

Please note, these are my experiences over extensive swapping over 2 days, where I discussed my perceptions with ddk, in most cases he agreed or made suggestions, reinforcing my opinions. I have tried to mention accurately where we disagreed. While it may appear from my write up we did everything serially, there was a lot of back and forth

Where DDK and I fundamentally disagree is that he set up his systems around Lamms. I on the other hand think the amps not as important, far less a brand, and I am a speaker driven guy followed by the source, and that the amp choice just follows the speaker – you drive it with what you have to.

You can get more information at David Karmeli’s sub forum on WBF which covers his analog insights, his system thread on WBF, and Another Bionor Thread on WBF