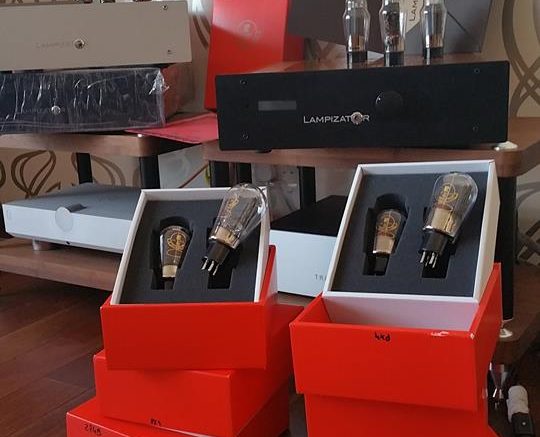 Various 300bs and other tubes compared.

I have compared the WE 300b reissue with the AVVT and preferred the latter on the Silvercore 300b amp driving WE 16A. A dealer I know had the same preference in another set up, and so does an audiophile buddy who owns both tubes. I would also suggest reading this detailed 300b review with Kevin Fiske and Peter Qvortrup where similarly, they agreed that one has to go back to the 70s to get the WE magic.

I have compared the KR audio 300b to the JJ and the Electroharmonix on my Lampi, and the KR, though less sweeter, was much more neutral, more linear and extended at both ends, and had way more control on complex music. It was clearly the winner. We also compared the Elrog 300b on the Lampi – this had a bit more sparkle and colour, and some magic in certain frequencies. Like the KR, it was more dynamic and bassy than other 300bs. Overall, I am not a 300b person on the Lampi at least.

I have already summarized the preference of my tubes in the Lampizator review in the Digital section. Here are the details:

There were 4 of us, including the Lampi Distributor Greg (Gpoint Audio) involved in one compare, Greg and I in another compare, and Bill and I in Bill’s system. I also did some compares in yet another system. The views are pretty consisten across systems and listeners unless otherwise mentioned.

Of the rectis, I have only briefly compared the Takatsuki 274b to the EML 5u4g, and the Tak was easily better. But I don’t have much experience with the Tak, and at $1k plus waiting time it is a tad bit too expensive. The KR 5u4g spcial edition for the Lampi is the best the rest of us heard, and Khonfused on WBF owns both the KR and Tak and likes both. Both are much more detailed, dynamics, bassy, with better stage than the EML.

When Rob picked me up at the station, on the way back he mentioned that he had preferred the px4 to the px25. I was skeptical because wasn’t px25 supposed to be just like the px4 on steroids?

But no, they are indeed quite different. We started with the px25 and the EML mesh 5u4g recti. I did not think that was dynamic enough, so changed the recti to KR 5u4g. Yet the system did not take off. We then added the Elrog 300b. Immediately, their was a big jump in tone. There was a sparkle around the Oboe, the chorals were projecting out more and decaying better, and the sound was embracing us. As later on we switched rectis, we found that the Solid plate of the 5u4g made it more dynamic, but the mesh plate of the EML 5u4g gave it more air. The air supplemented the air of Elrogs and made them sound better on the vocals. The Elrogs lost nothing on dynamics.

From Elrogs, we moved to the px4. Surprisingly the px4 sounded nothing like the px25. The tone on px4 for excellent. In fact, on the Bach Cello recording from Mike Valentine’s Chasing the Dragon CD, the px4 just shot over all the others. It was incredible how much details and variations on the cello were being heard, and how realistic it sounded. It was also the best tube on rock. The later Robert Plant’s husky voice from the No Quarter album (a collaboration between Page and Plant in the 90s), showed that Px4 were doing the huskiness, full bodiness, and the details of the hurdy gurdy and the drums better than all other valves.

Px4 to me sounded best with KR 5u4g, but others preferred it with the EML mesh 5u4g. This is quite a preference thing. I think Elrog should be part of every arsenal if one can afford it, to add the sparkle on some classical pieces, it makes some instruments like oboe, violin, and flute, stand out, but I don’t see Elrog as a stock valve. I think, and this seemed unanimous, that px4 was the best valve, apart from being an all rounder.

The 242s did not stand out on the GG like they had done on the Big 7 and at Bill’s so I think it is more of a gain play. We will repeat this at Bill’s. Funnily enough, at Bill’s the KR 5u4g was a better match for 242s than the 274b, here it was the opposite.

The KR 45s, which I did not like at Bill’s sounded great in this system.

However, for an updated and more conclusive view ranking KR 242 at the very top, followed by PX25/EML special 45s, PX4, and then the rest, please read the https://zero-distortion.org/lampizator/ thread.