This marks my first blog. It will be dedicated to topics related to music, mostly classical, and the means by which I listen to the music. There will also be stories about the people involved in the music: the artists, of course, but also some of the engineers and producers who work and worked behind the scenes to create the recordings. Many of the stories, including this first one, come from research I did in writing a book on British Decca Records for First Impression Music (Decca: Supreme Stereophonic Legacy). I was able to interview several of the engineers and other key staff at Decca who worked there during their “golden age” between the 1950’s and 1980’s. Hope you enjoy the blog.

In 1946, Decca Records (of the UK) released what most people recognize as the first high-fidelity record, Stravinsky’s Petrushka, conducted by Ernest Ansermet and the London Philharmonic Orchestra. 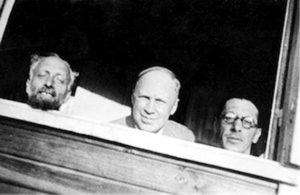 Ernest Ansermet, left and Igor Stravinsky, right. In the center is Serge Prokofiev.

This recording, released on 78rpm records, was the first recording to extend the frequency range to 14,000 Hz, well beyond the 8-10,000 Hz common for records. Decca dubbed this “ffrr” full frequency range recording. It set Decca above all other record companies at that time. When LP’s (33RPM) came out Decca had Ansermet rerecord Petrushka with his Geneva based L’Orchestre de la Suisse Romande, in 1949, as shown on the cover image. That recording is widely available, having been reissued on CD.

How Decca was able to do that is a result of work they did for the British Military in World War II.

This story actual begins a couple of years before the beginning of the war in Europe, namely 1937. It was then that the Decca Record company, still in the midst of the world wide depression decided to buy the Crystallate Record Co. With that purchase came three men who would be instrumental in Decca’s success in the recording industry over the next 40 years. They were Arthur Haddy, who became chief engineer for Decca, and two of the great recording engineers, Kenneth “Wilkie” Wilkinson, and Arthur Lilley. 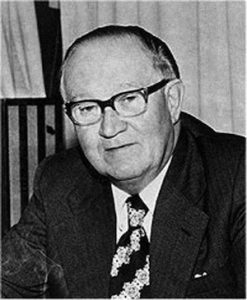 At the beginning of the war, in 1939, the German Navy submarines, called U-Boats, attacked the British Navy ships with great proficiency. The British had little success in counterattacks against the submarines. The subs had distinctive sonic profiles, but the major differences were in the frequency range above 10,000 Hz, where the current technology could not reach. Costly mistakes were made when incorrect identifications were made, causing the loss of British subs. The British War Office contacted Decca Records and asked them to develop a system that could reproduce and recognize these high frequencies. As Chief Engineer, Haddy directed his team on the project. Decca was successful and the British could then use this new technology to identify and sink the German U-Boats. After the war, Decca applied the technology to making records which extended the high frequencies to 14,000 Hz, creating the first high fidelity records.