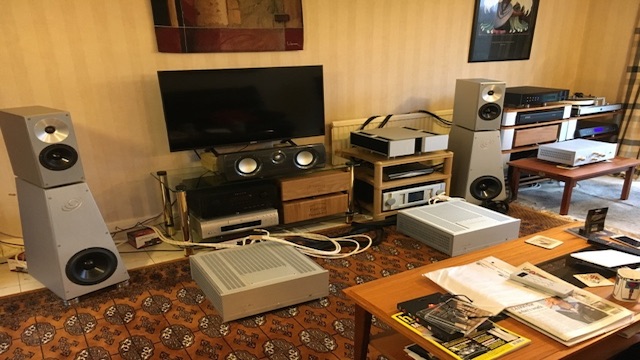 Here’s what I found on the Gon.

“One of our clients just replaced his $16K Pass preamp that comes in 3 pieces and his $27K Pass power amps with a microZOTL and 2 monoblocked 40s….and says they sound better.”

David Berning licensed his tech out to Linear tube audio, and they make the microZOTL, a power amp for headphones, serves as a preamp for 2-channel hifi, and also a 1-2w power amp – The microZotl 2.0 costs 1.5k, and each of those ZOTL 40 power amps cost 4.5k.

Why did hometheatrereview write this –

“Over the years, I have listened to and reviewed many excellent preamplifiers, both tube-based and solid state, from companies like VTL, CAT, Canary Audio, Raven Audio, Audio Research, Ayre, Woo Audio, Backert Labs, Mark Levinson, Luxman Audio, Lamm Audio, Purity Audio, Placette, Shindo, Esoteric, Simaudio, Boulder, and Concert Fidelity. The MicroZOTL2.0 is at least on the level of these fine preamplifiers, which are much more expensive. Without hyperbole, I believe the MicroZOTL2.0 might be a better performer than all of them. I will absolutely be purchasing the review sample to become my go-to preamplifier in my large reference system.”

Now, I  had to find out if the component is indeed high value for money or overhyped – so over to my journey.

I initially went to a small specialized dealer called thethoughtprocess in Essex (Kelvedon). Peter took me to his main room, where we heard the top of the line Einstein OTL monos and preamps with the Bergmann Sindre and the Soundsmith Straingauge, the speakers were open baffle 115db Bastanis. 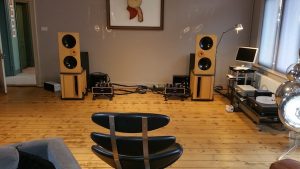 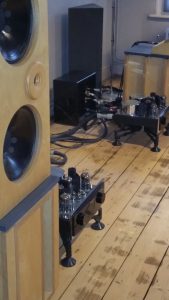 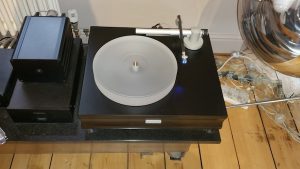 I have heard Einstein Light in the Dark on Odeon Nr. 28 before, and also heard it on Acapella Violons.

After that, Peter took me upstairs to his office system, which he considered his second system, and we started playing the same vinyl on a Nottingham Analog Reference with a Dynavector cart tipped with the Soundsmith (not a set up I am familiar with), into his own tweaked out phono, and the Berning ZOTL pre with Berning Quadrature Z monos.

Initially, when I saw this system, I was a bit disappointed. I mean, look at that – tine speakers, average live room, speakers back to the wall.

As the music started playing, something in me stirred. This was exciting. The room wasn’t perfect, but there was something special happening here. The sound was clean, transparent, linear, extremely extended at the top yet no edge. All frequencies were playing as they should. There wasn’t a midbass hump, no midrange or tweeter standing out, no extra valve bloom yet no SS sterility. It was as if there was no gear and music was flowing out.

These speakers are very interesting. They might look small, but these inert slabs of aluminum are producing great scale and are expensive at 20k. The sub has a 1000w amp, and the designer’s key strength is supposed to be time alignment to produce a superb sealed inert speaker with a first order crossover.

Most other speakers have some artifact that stands out strongly – mids for stats, loads of bass for some large cones, crossover problems, leanness in the midbass, shrieky tweeter, room interactions. Many a time one or the other of these attributes disturbs us and stops us from having a perfect system.

Here are some reviews Positive Feedback

While this was by no means perfect, this had promise – the bigger Maestro might actually be one of the best speakers around if this promise is fulfilled. It is linear on all frequencies – it won’t have a horn timbral magic, a stat-like decay, a ribbon like midrange, or the sheer balls of Apogee bass panels – but it will play all frequencies like no gear exists, and will let your cartridge flow through. It is fast, great bass, and the openness and natural imaging gives a lot of musicality.

Now, the Bernings were a key in this happening. Think of what a Spectral + Magico owner is trying to achieve – neutral, transparent sound. Now, some of you might like this sound, and some might find it sterile and lean, and might prefer valves in the chain or another amp or another speaker – but subjective opinions aside, think of that Spectral+Magico owner’s objective and what he is trying to achieve. That is exactly what I found this combo doing well.

To eliminate synergy issues between pre and power, we did the same exercise in the system below, with the Einstein power amps. Oistrakh’s violin was extremely extended, with high timbre, crystal clear, on the Berning. The Einstein pre rolled off the top end – Peter, who is not familiar with the recording, realized it immediately too. The Einstein did give more bloom especially in the midbass but I found the Berning more natural, due to its giving me a beautiful extension, linearity, and transparency, with valve harmonics but without the haze, muddiness, and bloat that can be the negative of many regular valve electronics.

Audio Machina (smaller model) make it to our Recommended Speakers list for small rooms (while they will play in big), but not cheap. The maestros if they live up to their potential will be direct competitors to YG Haileys and Stenheims at the price point and ease of room and WAF set up. Low resale/used market though 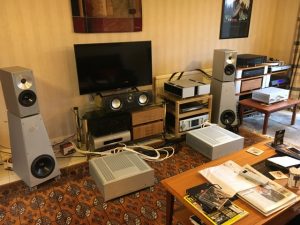 I therefore called Barry (Barry2013 on WBF) who too lives in Essex, if we could come over to do a shootout with the Vitus SIA 025 on his YG Kipod IIs. While some of you might think oh, the Vitus is lower priced than the Berning pre+power combo with lower headroom, I did not do this shootout to find a “better”. Vitus SM102 is already a Recommended amp on this website. I wanted to confirm my suspicions, that both were different sounds, and wanted to check if one would talk to me. Note that the sub-heading is Vitus and Berning, not Vitus vs Berning.

This was my third visit to Barry’s and his system has really improved since the last visit. He used to have a bright edge to his sound but that has now gone, so his system is sounding much more musical. He attributes a large part of that improvement to his Entreq.

His Townsend Rock V with the Dynavector XV-1T and Whest phono, Origin Live arm, was sounding much better than his dCS Puccini IMO. We heard Bach chorals, baritone, duet, Cecilia Bartoli on CD, and Barry’s Patricia Barber, followed by Bruch Scottish Fantasia, Winterreise, and a couple of Jazz tracks from Peter’s vinyl on the Townsend.

Switching to the Berning Quads with the Berning pre and back to the Vitus, confirmed what I suspected. These are two very different sounds, and both are excellent. There is no better, it is all about what you want.

The Vitus (and Luxman and Symphonic Line Kraft fall into this category of sound), are full bodied tones, liquid and flowing. The Vitus SM 102 and such would probably excel in this category more as compared to any others. The Luxman and Vitus are a bit slower (the Kraft not so much).

The Berning Quads belong to the Spectral/Boulder sound of clean, transparent, very fast amps, with a high degree of linearity and extension, but with more valve harmonics yet not the muddiness of valves. The Bernings were doing more resolution on chorals, on Mendelssohn’s Elijah (complex tutti), and Scheherazade, and the timbre on Bruch’s violin was better due to the higher end extension. The Vitus was doing a more cohesive full bodied tone that especially favored piano and the chest during the vocals. While, unlike valves, Vitus was not rolling off the violin…I would say that the Berning was extending it more.

Vitus had more chest in the vocals, while the Bernings had much more openness and linearity at the top, setting the vocalist free, while the Vitus made him fuller. Both preference and speaker match will be important here. I can immediately see Bernings being suitable for stats to supplement the transparency, speed, and disappearance. Vitus has an organic tone, Bernings has transparency with valve harmonics but cleaner than most valves, and you can adjust your source to add to the body. Bernings can be superb on the top half with more speakers for openness and transparency and soar. The selection would depend more on how the amp matches in the mid bass to create a body with your speakers.

Berning Quad Zs are not substitutes for the Vitus sound, but a different sound, and need to be compared to Spectral, Soulution, and Boulder, to see if they can do what these guys do as well. Berning will definitely add more harmonics than them in a positive way. They are fast with a lot of energy. In fact, I remember comparing Spectral DMA 400 with VTL S450 on the Wilson Alexandria XLF at Innovative Audio. The Spectral made it seem as if the soprano’s mouth was opening wider, the choir was more clear, the bass was faster and cleaner. The VTL had more harmonics that brought in involvement, but the midbass was muddy, and the vocals seemed with a mouth that was not wide open, just enhancing the mids. I wanted both. Bernings does give the Spectral sound with VTL harmonics. Does it do Spectral thing as good as Spectral needs to be confirmed.

But like a good idler, direct, or belt, these are different sounds and you have to audition both to see which talk to you. Don’t try to look for a “better” preference in my words. There isn’t one. Don’t even try to analyze our findings for what you might prefer – to make a fair assessment, it is required to audition both.

The pre is definitely recommended as it is an extremely transparent pre with nice harmonics and low cost. The pre and amps are light and cool. Also, you don’t want to use the Berning power with a traditional valve color as you don’t want to add the valve colour into the Berning power. It defeats the purpose. The magic will be lost. In fact, buy yourself a Berning pre (relatively low cost), and then compare to some top ones which might be out of your budget for now, and if you find a better one, make the swap when budget allows, but till then, this would be excellent. The other SS preamps that do this extension would probably be Dartzeel, SMC VRe1, CH Precision. Or Ypsilon especially given passive and active stages. All too expensive.

Roy Gregory and Audiobeat reviewers have this as one of their reference power amps. The VTL vs ARC vs CJ shootout by Roy Gregory was done with this poweramp. I can see that the colors of each of the preamps would have stood out cleanly.

As for the SIA 025, I can easily see myself preferring it to some SETs on horns. The Vitus class A does not let you miss tubes. On the subject of power, if you talk to Hifione in California, a key Berning figure, he will recommend the 200w Quads over the 30w Berning for horns, to provide it more headroom and dynamics. This is also the Mike Lavigne school of thought, to give more watts to his 96 db speakers, the Henk/Graz/Jason Bloom way on Apogees, the Avantgarde way to load up their trios and bass horns with class A 150s. There have been people moving to horns with Vitus big stereo amps – Avantagarde played with them at Munich in 2014, and there is a person down under running the trios with Dartzeel.

Note: All Recommended Components and recordings for auditions are in the About Kedar page 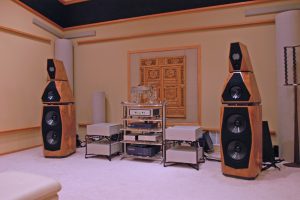 12 Comments on "Berning (Compared to Einstein and Vitus), Audio Machina"