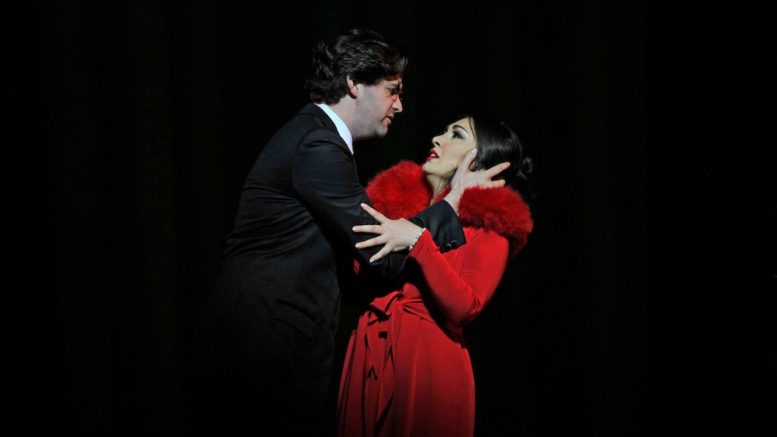 By the time we had completed our nine concerto and opera/ballet concerts, we had heard 5 of the top six major London orchestras.  In my estimation, they rank from the top: London Symphony, Philharmonia Orchestra, London Philharmonic, Orchestra of the Royal Opera House and the Royal Philharmonic.  The only major orchestra that we didn’t hear was the BBC Symphony Orchestra.

Royal Opera House Covent Garden – Royal Ballet – Four short ballets with music by Schubert (Ninth Symphony fourth Movement), Gottschalk-Kay Tarantella (TAS super disc on Vanguard), and Rachmaninoff Symphonic Dances (TAS super disc Johanos Dallas Symphony).  The Royal Ballet is one of the two or three top ballets in the world. We saw why.  The precision and athleticism and grace of the dancers is a marvel to behold. The Orchestra is one of the best in London and they play for both the ballet and the opera. However, the sonics from the middle of the stalls (ground floor right center) was not as rich and powerful, particularly in the Rachmaninoff, as I would have wished.  This may be a result of the rather deep pit which prevents the orchestra from having any direct lines to the audience in the stalls. The hall was completely remodeled a few years ago and the seats are quite plush in the stalls with decent leg room.   The huge antechamber built as part of the remodel, sits adjacent to the opera house and has an upper level connected by a long escalator to the ground floor. It can be directly accessed from the balcony, and looks, from the ground floor, like it is floating in space.

Glyndeborne Festival – Verdi La Traviata –   Glyndebourne is an estate about one hour south of London, just north of the city of Hastings, near to where William the Conquerer landed from France in 1066 to change British history.  Traviata is one of Verdi’s most popular operas (along with Aida and Otello) full of great tunes, with a tragic love story. Glyndebourne had a great young soprano, Kristina Mkhitaryan, who some say would be a worthy successor to Anna Netrobka.  She has an exotic beauty and rich, powerful voice balanced with a beauty and delicacy.  The rest of the cast is also fine, particularly Igor Colovantenko, who sings Giorgio Germont. The sets and costumes were 20th Century, but I didn’t find it detracted from the performance.  The London Philharmonic was in great form and we splurged on stalls seats – row E right center, so we got great close up views of the singing and great overall sound.  The Glyndebourne Theatre was completed in 1994, replacing the original hall, and holds only about 1000 attendees. The sonics are quite fine.  Glyndebourne differs from most performances in that it begins in the mid afternoon and has a long internal of 90 minutes where one can picnic on the spacious grounds or eat at one of the three formal restaurants. The audience dresses formally, with the men all wearing tuxedos (except for one or two).  I brought mine from home, and in the past two years, our three visits to Glyndebourne meant that they make up 30% of all the times I have ever worn it.  Glyndebourne was the brainchild of John Christie who had inherited the property and with his wife had a great love of opera.  They began in 1934 and currently their grandson Gus Christie is the third generation head of the festival and resident of the manor.

Royal Festival Hall – Favorite Opera Choruses – Philharmonia Orchestra and Chorus and 3 soloists – This was a really fun concert, a combination of great orchestra excerpts and choruses from well known operas and some lesser known choruses and well known and lesser known arias.  The Philharmonia matured over the past twenty years when we first heard them, (having fallen from #1 or #2 after WWII when they were formed by EMI Producer Walter Legge. ) The producer of this extravaganza is Raymond Gubbay, who also stages pops concerts at the Royal Albert Hall (like his well known 1812 Overture concert with real cannons, laser lights,etc).  This was more conventional, with the director of the excellent Philharmonia Chorus (about 80 strong) doing the conducting. Three local singers, soprano   , tenor  and baritone   completed the performers.

Glyndebourne Festival – Cavalli Hipermestra – with William Christie conducting the Orchestra of the Age of Enlightenment (10 players).  We were in the stalls, left center. Cavalli was a student of Monteverdi, who is generally credited with the first opera in 1600.  He worked in Venice, when opera was the pop music of the time. Written around 1650, Hipermestra was a big hit (Venice at that time had 10 opera houses producing about 50 new operas a year for a population of 140,000 people). Cavalli was the first composer to actually make money from writing operas – as opposed to being subsidized by rich patrons. The opera was originally between 4 and 5 hours long, but was cut by about 50% for this modern production.  Bill Christie (no relation to Glyndnebourne’s Gus Christie), is an early music specialist who founded Les Arts Florissants in Paris in the early 1970 – lots of recordings on French Harmonia Mundi.  Bill was a year ahead of me in college in the mid-1960’s. He chose to duplicate the size of the orchestra that Cavalli used 370 years ago, making it the smallest orchestra ever used in Glyndebourne.  The opera itself is mostly recitative with some arias, with great voices, including the hero sung by Raffaele Pe, a well known countertenor.  The story itself is complex, which means that following the very clearly sung recitatives which advance the story lines (and the accompanying supertitles) is very important. The story begins with the marriage of the 50 daughters of the King of Argos to the 50 sons of his brother.  Having received an omen that he would be killed by one of his nephews, the king has ordered his daughters to kill their new husbands on their wedding night.  You can predict that one of the daughters is in love with her new husband and tips him off, rather than kill him.  After a major war and the destruction Argos and the killing of the king, there is a happy ending. The setting is the modern wartime Middle East, with the two opposing families being two Muslim sects (probably Shiite vs Sunni – like Iraq vs Iran 20 years ago).