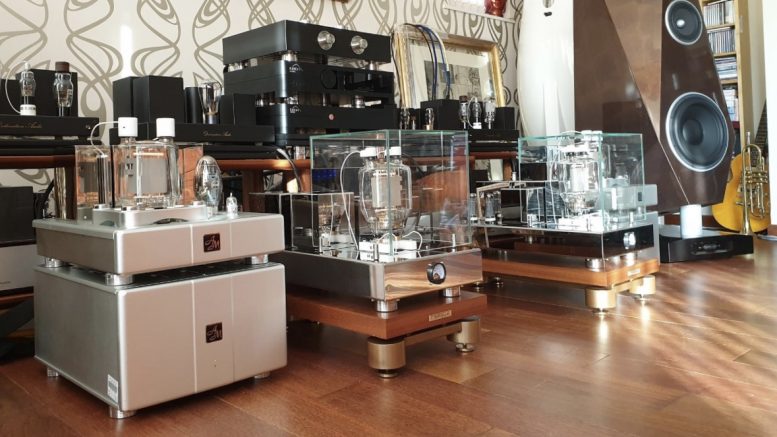 In 2019, I heard these speakers at G-point audio (near London, UK) with various amps including Riviera integrated hybrid 10w, Grandinote, and mycube EL84 (12 watts). At that time I found it quite musical, but told Greg I wished for more headroom and would like to hear them with more powerful amps such as the Riviera 25 watt integrated or their flagship 50 watt monos, or something even more powerful. Only the Grandinote seemed to have the headroom, while the low watt valve amps added glimpses of musicality but the music sounded constrained in terms of dynamic range, swings and resolution.

Fast forward a year later, and Greg sent me a teaser.
This was followed by the pics below…He had Silvercore 833c, and Audio Music Silver Edition 833c. Silvercore is one of my favorite electronics designers along with Thomas Mayer and Misho Myronov (and Lukasz in dacs, of course, I haven’t heard his phono and 211s yet). The Silvercore is 20w, and the AM amps are 120watts. Greg had received the AM as trade-ins for a Silvercore 300b.

We started with the Silvercore, and lovely though the amps are on Tannoys and horns, they did not have the headroom for the Dynamis. The SIlvercores were great on the Pnoe with the Thomas Mayer and the destination audio amps, but more on that later.

The phono and the preamp were all Silvercore, with the top Sikora turntable model, Sikora arm, and Art 1000.

As soon as the Audio Music 833s came on, I told Greg, wow, I need to do a write-up on the Dynamis. This is excellent.

You will note the contrast the AM + Dynamis is showing to the other videos playing the same music track on my youtube channel, including in comparison to some of my favorite horns

I love the Pnoes, they have their own strengths that are praised to no end on this blog, but the Dynamis were holding their own. The paper midrange of the Dynamis have a similar magic to the paper based AER BD4 drovers in the Pnoe. The silk tweeter crossed at 1.5 khz has excellent extension and highs, and I felt the transparency and openness associated with beryllium horn drivers such as TAD and Radian in the upper half. They cast a huge stage and disappeared, though they had been placed in a crowded corner.

The 12 inch aluminium scan speak woofer is crossed over at 150hz. Coupled with the slope that time aligns the drivers, I felt the coherence associated with Tannoys but with more clarity and agility and resolution.
Here’s another video.

The Italian design is high WAF, and the 14 diamond corners and the way they tame the standing waves are one of the key reasons for the easy disappearance.

These WAF units fit easily into small and medium sized rooms, and can work with powerful SETs from KR, Audio Music, Ming Da, and a few others. I haven’t heard them on push pulls like Jadis or Audio Research, but those should work as well, or with hybrids like the 50 watt Riviera from Italy.
—
Kedar Desai