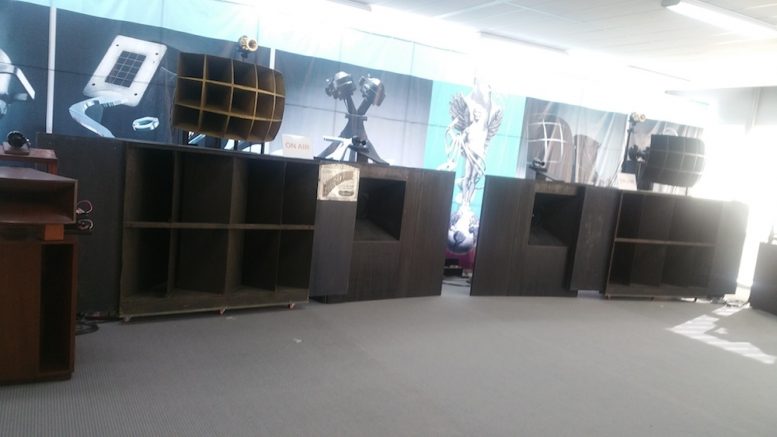 I was here only for two days, Saturday and Sunday. As always, caveats that show reports can be misleading as they refer to only how well the room is set up and nothing to do with the gear. Positive notes are a good indication to explore further. Negative notes imply it can still sound good in proper conditions. I am the first to admit I cannot judge attributes of gear from listening to at shows.

The WE room was fantastic in 2014 with the 12A/13A on either side, then in 2015, and disappointed in 2016. This summer, it was again fantastic. They had halved the Mirrophonic 2 as it would not fit in due to height 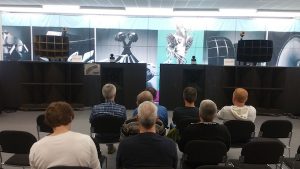 Apart from the WE and the Silbatone electronics, they had the VDH on a Schick plinthed-Commonwealth 12 turntable (the EMT of Australia). 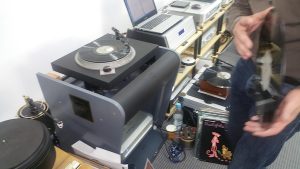 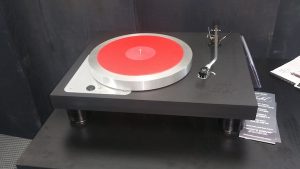 They let me AB my Beethoven’s Emperor on that vs the small idler TT that Schroeder had put together with the Schroder arm and the Tzar DST (copy of the Neumann DST). In that set up I preferred the Schick VDH combo, but it could possibly be because of the WE not having highs above 15khz, and the Tzar therefore sounding too smooth and the VDH having the higher top. They felt that the Tzar DST has more texture. Both the idlers were silent.

The one with the red top you see above is a Schick idler on display, his own, I had heard a more primitive version of it back in 2015. Then I was a digital only guy ignoring analog, but they alternated tracks on that Schick and the Scarlatti, and both Audiophile Bill and I had stared flummoxed, and this TT for 15k Euro is on a mouthwatering must-have list.

I was here on Saturday and Sunday only, but spent most of the first half of Sunday in this room.

In the WE room on the Caeles they had the Art 1000, which I did not get to hear but they liked. 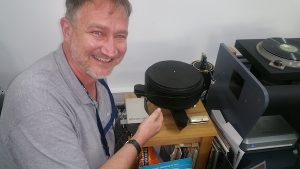 The person you see above is Christof Kraus of Silvercore, who runs one of my favorite rooms in the world, at the bottom of this thread https://zero-distortion.org/the-italian-over-the-top-road-trip/

The Viva masterhorn room also had the Art 1000 on the Vertere which I did get to play my vinyl on, the Viva guy was gaga about this cartridge.

In the Thoress room, I was impressed by the flexibility of the phono enhancer. I played with changing his curves on my vinyl. By using the filters on the phono, you can not only change the brightness, but also make the soundstage come forward or go more to the back

I preferred the Soundsmith Hyperion on the VPI arm to the Soundsmith Strainguage on the Schroeder arm. The Hyperion at 8k is 0.6K euro cheaper, but has to go through the 1.2k phono.

As a turntable tweak, the Stein Carbon Signature mat was fantastic – we ABed it with and without, with it gives a lot of bass, space, and separation. Without it, the sound just goes flat. Are there any adverse effects on the tone? Cannot say in a show demo but bought one to have fun with.

The Vitus SM 103 with the smaller Goebbel speakers had the VPI Titan with an Acoustical Systems Avion. I have heard the Palladian before and compared it to the Soundsmith Poua on a Kronos Sparta. The Avion is one lower from the Palladian.

SME had the Ortofon A95. The owner of SME is also the owner of Audio Lounge here in central London, a shop where he also deals in YG, Nagra, and Burmester, and the SME room was with YG Sonja and Nagra. Don’t think Nagra has the drive for YG. I have heard the SME sounding way better with the YG Hailey in his shop (more space too) with the Burmester, because of the greater drive (not that I am a fan of the Burm tone compared to Nagra). But that drive, current, power is important to open up the YGs and let them do the soundstage which they are good at. 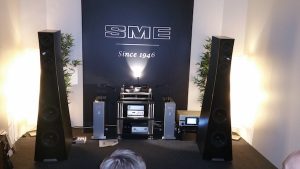 I already love the Trios, it is one of my favorite speakers, but did not spend much time in the room as they were playing awful music. The live drummer banging away through the system was fun, both he and the system seemed they were on cocaine. Loads of energy. In some ways, given that you cannot get the best sound in hifi shows, this is a good thing to do.

Kronos Pro was with Zyx Uni Premium in both the Goebbel-CH Precision and the Rockport-Absolare room. The Goebbel room sounded great, we played Scheherazade 4th movement all through and then the Kronos designer’s Beethoven Piano direct to disc. The Goebbel in the sweet spot were staging massive, behind and wide in an arc, tough to get this at an hifi show, I think these speakers have the potential to be set up to give a stage like in Mike Lavigne’s room.

The most natural sounding room to my ears after the WE was the Audio Exklusiv, recommended by the late and great Mr. Acoustat. I think these panels are better than CLX and Quads, and the retail is 16k Euro (half for the slimmer panels), and the sound is airy, transparent, natural. They probably will be limited in rock and electronic as most stats, and I don’t think they can play ultra loud. But if you like the stat sound, try these.

The best value cone was the Stein music 10k Euro cone, which reminded me of the Stenheim Alumine 5 but at lower prices. Both Jazzhead (who was with me through most of Saturday) and I were shocked. The scale, soundstage, bass, was incredible for the size. In a big room too. 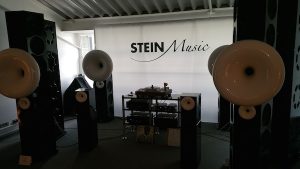 For those of you who haven’t been to Marriott, the show goes on till 8pm, and they had the Viva Masterhorn with Vertere and Art 1000, the Totaldac horn with the Lampi (just kidding, with the Totaldac), and they also had JMF and Acapella. I have been to JMF and Acapella before as well as to the Audionote room where they have a live cellist playing with the music, so did not go this time. The Totaldac horn had nice size and timbre, but needs to be heard properly to see if it has good integration. The cost is 38k for the speaker and 12k for the subs. The speakers do go quite low, we tried ABing the sub on and off. The Tune Audio this hear was nothing compared to the Anima last year. 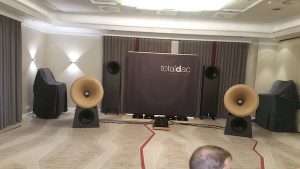 The Blumenhofer with Mastersound SETs, Technics SP10 mk3 and Airtight Opus sounded nice but more like a good cone then with the flow of a horn. I have also heard them with a Halcro as compared to this Mastersound. Good integration. 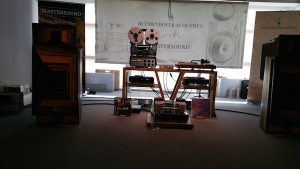 The big Odeons at 124k with New Audio Frontier were the best of the expensive horns. The previous model was just 30 odd k. 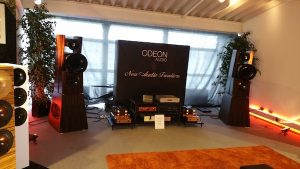 Cessaro had an active cone speaker which was quite nice. As someone who prefers the analog sound, I was surprised when a CD played through the Northstar CD player into the Cessaro processor (digital processor, EQ, and preamp), destroyed the Bergmann+Miyajima Madake through the Thrax phono. Anne Sophie Mutter on Tchaikovsky’s Violin concerto, I heard her play this piece at the Barbican just over a week ago. Unfortunately my battery had run out so could not take a pic of the CD. 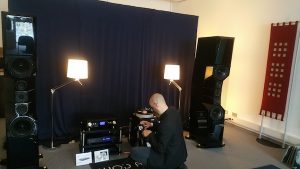 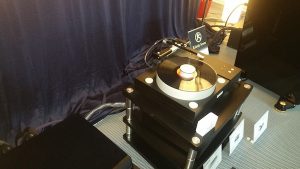 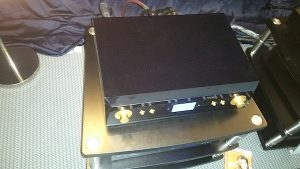 The Techdas AF2 and AF3 heard through the Einstein with Einstein cartridge, TT, phono, amps and speakers, did not impress Justin and me.

On 3D sounds, there were 3 products experienced. The Baach SP, which throws a gigantic 3D soundstage, the Trinnov multichannel with Vivid, and the Smyth Realyser headphones.

I thought the Baach was doing a bit too much, since it records and plays back from where the microphone is placed near the stage. It might do this accurately, as the live test confirmed. He walked around the room talking and recording, and when he played back, the sounds came from all over where he had placed himself while talking.

For those who like the Vivid, the G1s being played active through the Trinnov crossover with 4 amps 1 for each driver and then the other 5 channels was impressive for good 3d effect.

The best was the Smyth realyser, where you can store any measurement setting from a room and play back through the headphones. Unlike other headphones, there project out the sound. Here’s the Stereophile review

The prices at Munich have got more and more atrocious, almost like there’s a fear that if you don’t price your product high, you won’t be taken seriously. Sorry I don’t have pics for other gear as epic fail, I reached Munich with phone battery almost dead.

In normal cones, apart from the Stein, the Vandersteen Quattro with Brinckmann Balance and, IIRC the EMT cartridge was sounding nice. We saw many other rooms but would not be fair to post anything negative based on the show. Since I liked the Stenheim Alumine 5 last year, I must say the big Ultime disappointed this year, but had sounded good in 2015