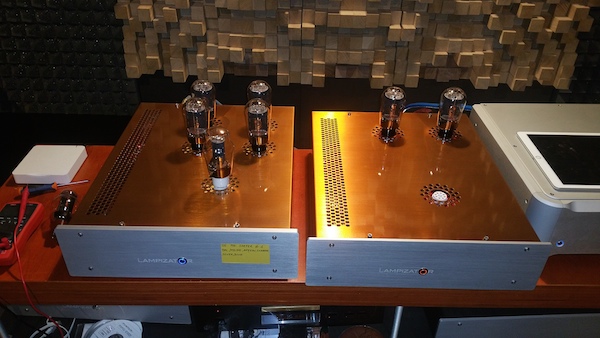 The Neurotic Audiophile in me decided to optimize the Lampi – these questions about the difference between the Duelunds and the Mundorfs, would Shun Mook mpingo discs in different parts inside the Lampi cause magic, and how is Amanero different from R2R were bothering me. Maybe I was on to something big. I also had to get the superclock and the DSD 512 upgrade anyway.

I therefore decided to fly over to Warsaw to meet Lukasz, whom I have previously only met at a hifi show. As I chatted with Lukasz and the team, less than 10 people working out of a few rooms, I got some understanding of what it was what goes into the sound and commercials of a dac.

As you drive from Warsaw to a small town, the first thing that strikes you is that if this facility had been present in the US, UK, or Switzerland, the costs would have been up by default, nothing to do with sonics. The only way to reduce costs if you are in an expensive country is to outsource to China.

The second thing that strikes you when you see the raw material in the building, is that Lampi has now extended itself across Amber, Lampi 4, 5, Big 7, Atlantic, Golden Atlantic, GG, Siebner, amplifiers, etc. This has brought economies of scale to the dac, as opposed to having extremely few models of an uber priced dac which drive costs up – a manufacturer needs to cover fixed costs to make the business sustainable, then start adding in the pricing to profit, not to mention using pricing as a marketing strategy.

As I sat down in Lukasz’s room, I found myself listening to the prototype of his speakers – these are budget speakers, priced around 5k Euro, for the budget audiophile. To keep costs low and sonics high, Lukasz has structured it around:
1. Open baffle
2. 18 inch woofer
3. 70% driver cost is in the ribbon tweeter, with the midrange and ribbon moving coherently, open, and the bass supplementing the sound. 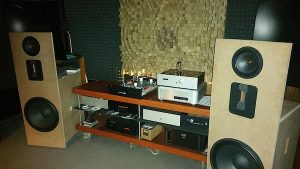 Now, this surprised me, as whenever I am asked how Apogees can sound much better than much costlier cones, my answer is – A) your cones sell at 1/3rd that price B) Part of the reasons why Apogees sound better is the open baffle, and cones start with a problem, then spend loads of money trying to make resonance free that baffle using Aluminum or Phenloic Resin etc, leading to higher costs, and C) The now high weight conal deadwood has to be shipped around the world with UPS or whatever leading to much higher costs. Apogees are bought directly from the restorer who has zero expenses otherwise, no overheads, as it is his hobby.

I realized that my favorite digital maker was thinking along the same lines – Lukasz was planning to sell these speakers direct, and with open baffle and minimal marketing, 5k was a sensible price.

While chatting about other Lampi users, I mentioned Grant (Lissnr), and Lukasz said that Grant’s room sends him into bliss the moment music starts playing. I said yes, that’s the Apogee for you – only to learn that Lukasz was a stat fan and said he preferred Grant’s speaker more. He did not know about Apogees much, but I couldn’t believe it – 3 years of Lampizating and I find the designer likes the same speakers I do – talk about synergy of taste. I had to control myself from embarking on a long and passionate Apogee monologue as I had to get on with the compares.

First up, we compared the Golden Atlantic to the GG with PX4 and special KR recti. On non-complex music, I could not make out a difference. Vocals and tone were equal. We did some Bach cantata arias. On complex orchestral like Gnomus and Scheherazade 4th movement, the difference increased with the GG providing higher resolution and separation. The advantage is you can voice the GG with tube rolls, but the cost is significantly higher, almost twice the price. 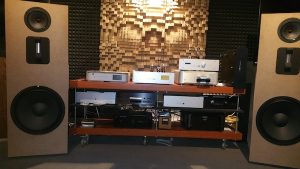 I should mention that Lukasz thinks that is because of my preference of R2R over the non-R2R. I will also be doing another GA vs Big 7 shootout in the UK at G Point Audio (Lampi distributor) at some point, so don’t just take this compare point.

Next up, decided to compare the Mundorf with the Duelund Copper Cast (80 Eur) and a costlier 400 euro Duelund. Lukasz quickly added a toggle switch, and on his TEAC 25 transport, you can set A and B points and loop the CD between two points. During every loop he would change the toggle.

We looped on Bach chorals, an Aria Duet, Gnomus, and different points in Scheherazade. I could hear minimal difference. At times I heard, at times I imagined, and finally rated my preference for the sake of it, checked, and the switch had settled on the Mundorfs. FYI, I have the Jupiters.

Lukasz was quite happy with the result, because he said he and his team struggle to find a significant difference between these caps, and was quite happy that I had reached the same conclusion. He has audiophiles calling him up and demanding an “upgrade” to Duelunds, and are willing to pay for it. He is quite frank in his opinions. He also mentioned that there are 200 points to test in that dac – you can test different resistors, caps on the PCB, different voltages at different points, different cables, shortening lengths of cables, etc etc. His team implements a toggle switch for each test and fine tunes by ear, apart from measurements. So maybe I was not golden eared enough to tell them that “it’s those 2 caps, silly, all your tests were worthless”.

Most of Lukasz’s time is spent trying to optimize such stuff, and when they do find something that is not as big an announcement as adding a clock or a new circuit board, they add it in immediately the next morning – it is therefore advisable for Lampi users to have their dacs serviced once a year to get these tweak upgrades, or maybe once every two years.

On the 400 Euro Duelund cap, I did perceive fuller tone, ever so slightly, in the mids, but possibly not. Also, I learned that some brands leak more DC than the others – this leakage will not matter on SET amps, but if one has amps where if a DC leakage is detected, the amp shuts down, then it could be a problem. On speakers, caps play a totally different role so sonics should not be confused with what they can do in a speaker crossover.

Next up, streamer compares. We compared the Lampi supercomputer to the Auralic mini and the PS Audio streamer. To be fair, these are cheaper competitors, and one will have to do it more with the likes of Aurender. The streamer was better than both, I particularly did not like the PS Audio, and already know that the Aurender X100 is quite better than the top level Auralic Aries. What was significant during this streamer compare, is that the Lampi computer is quite better on SPDIF than on USB, and the tubed SPDIF output is better than the non-tubed. They are both better than the TEAC, but I think they need to add more dynamics and depth as compared to the Esoteric transport through SPDIF.

My final compare was comparing my own single-ended R2R GG with a balanced non-R2R GG, and I found mine to be more resolving, cleaner, and punchier. While Lukasz in this preferred mine, he is more of an Amanero guy, that is the sound he set out designing, and perceives that as more like SET amps – I agree, on vocals and jazz, they have a feel, as circuit is simpler – R2R is cleaner and more dynamic and separated, and the difference in feel or tone is extremely close. Non-R2R might suit those with SETS and not highly resolving systems. 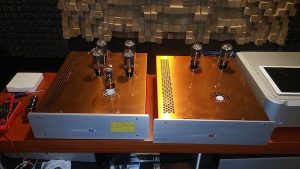 Overall, the speakers were extremely musical and open, filling up the room, with more of a near field listening sound, enveloping you, yet with depth. We had big JBL drivered Klipsch style horns directly behind, but more space should give it tighter bass.

The other key thing is Lukasz is planning to leave the finish non-WAFed or veneered, to accommodate budgets and WAF requirements. I totally get this – I personally have low WAF needs, and would like to maximize my costs on sonics rather than looks. But GG aside, even an Atlantic into a low cost musical SET into these speakers should give reasonable audio

It was also good to meet Adam (Elberoth) for dinner. He was able to take off time from his 3 day weights, 4 days HIIT training. It was at his place two years ago, one of my first trips, that I did my first big Lampi compare – I took that trip to find out how much would spending on a Trinity take me over the Lampi, and had been quite surprised at the result. Those days I had been planning to sell off Lampi for a “pricier dac upgrade”. It was then that I learned to stop looking at price tags, pay for a plane ticket, listen, and save money.

There were other DIY horns behind Lukasz’ speakers. They were a bit too big for this room. 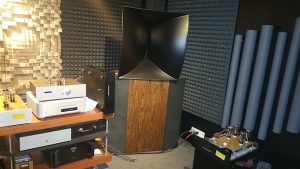 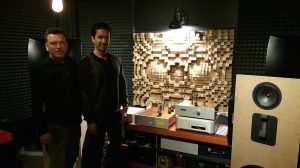 I kept all demos to PX4, as I already know what happens as I move to a PX25, special 45, and the 242. The other tidbits I got is that is that in Lukasz’s view, his magic comes from both the Analog conversion and not having opamps in a dac. Lukasz has also found that copper is the best for shielding, better than other metals tested such as steel, lead, etc. I also was not able to optimize the inners with mpingo discs, unfortunately.

Those looking for DHT tubes should also look at http://best300b.com/ – a co. affiliated to Lukasz.

Be the first to comment on "Lampi Factory Visit"