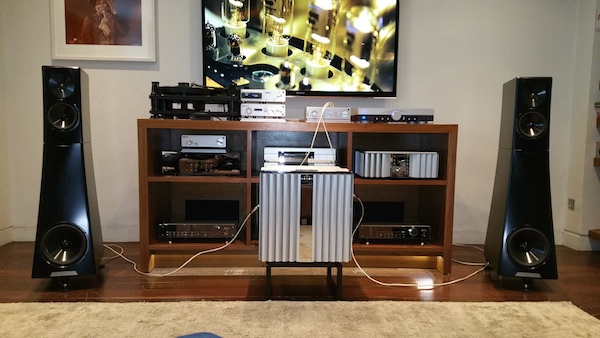 Just back from a fantastic showroom that is at close proximity to me in London. Audio Lounge houses some of the best high end audio equipment, and for me set up a demo with YG Haileys (they also have the Sonja 1.2 in the shop currently). The source was the Nagra CD Player and HD dac powered by the MPS battery power, Nagra Jazz pre with its power supply, and we initially started off with the 100w Nagra classic amp.

I immediately realized that sound lacked oomph, especially in the midbass and bass. So out came the Burmester 909 mk5, an amp that looks like a subwoofer. I have heard the 911 mk3 (with Burm 077 pre) on the Haileys before, and have compared the 956 to the Gryphon Colosseum on KEF Blades and Gryphon Pantheons.

Immediately the bass/midbass and soundstage filled up. Keep in mind the 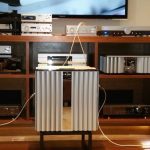 Nagra classic is 1/4th the price, and is still clean and has nice tone – on an easier to drive speaker, I can see the possibility of this amp sounding better. However, for the Haileys, you need the power and control.

I was still not happy with the sound, and attributed it to the rack being in the middle and/or the YGs being too far apart. So after listening to chorals, baritone, soprano, and full symphony, we switched to the SME 30/12 with the Clearaudio Titanium (roughly 5.5 – 6k GBP), through the brilliant pocket size Nagra BPS phonostage. I put on Bruch’s Scottish fantasia, and the jump in the system was startling. The room had now filled up with music instead of the sound being back there towards each speaker. There was soundstage between the speakers, there was bloom and fullness in the midbass, the tonality had improved, there was life. I quickly moved through Winterreise, Bernstein’s Emperor, Argenta Espana to confirm the magnitudes of increase, which Luke could hear as well. And what a low priced phono! Highly recommended, you can take it around in your pocket and compare to other phonos. 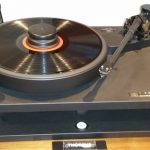 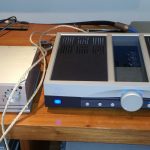 We then brought in the battery powered Siltech C1 preamp. I had not heard of this preamp before, nor had I heard ECC86 valves. The C1 is part of the Siltech SAGA system, a 100k+ system consisting of the SAGA amp and the preamp. We played through the Siltech, and then went back to the Nagra. Was Siltech better? Yes. It was more dynamic, better bass, and better on the piano – more range, extension and tone. Were the differences worth bothering over? Not necessarily. The Nagra is a great preamp, and held its own, given the money and the size, I would go with the Nagra. If you really wanted to spend for the final sound, try the Siltech and compare to the Ypsilon PST (I still have to verify my Ypsilon pre impressions, need to compare it to something). But the Nagra pre is on my top target list.

By now, I was really enjoying the system. The listening room has been spaced like a normal living room, no fancy treatments except a carpet and some padding on the rear wall. The rack in the middle and distance of speakers from the wall is not as one would have in a dedicated room, but as one would have in a compromised position in a living room. Such conditions would be challenging for most high end cones, and as I keep repeating, the two cones that I can think of that sound musical in such circumstances are YGs and Stenheim Alumine 5s. With YGs, important to drive them well and treat any edginess to the top end.

We again tried going back to the Nagra amp, to see if it sounded better with the analog thrown in, but the findings from the initial impression were confirmed. Again, I see this amp being a very good match for easier to drive speakers.

Then I lugged down my Golden Gate. As expected, it was a no-contest. The sheer drive of the Lampi, the soundstage, bass, dynamics, separation of instruments on the first track we played, Scheherazade’s 4th movement, was exhilarating. We had the Nagra and the Lampi each plugged into a separate channel of the Siltech, so the back and forth was easy. The Nagra CD player was being used as the transport for both. I  even decided to give decibel benefit to the Nagra. Yet, with the Nagra, the soundstage was in the speaker plane at each speaker. The Lampi would kick the soundstage sideways, back, forward, fill up the room, and the sound would be rising up towards the ceiling as the room heaved with the rise and fall of music. Each instrument was clear in multiple planes, instead of in a flat horizontal plane towards the listener. Like with the SME, the sound was more cohesive. The tones stood out clearly and with a difference, and the most exhilarating factor was the sheer drive. 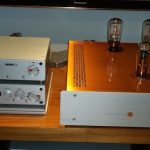 I think the Nagra was close on baritone and soprano – the Lampi gave the baritone a bit more chest. The chorals were marginally better on the Lampi, but both were enjoyable. The major differences happened on symphony. Apart from Scheherazade, we played Bydlo (Pictures at en exhibition). With the Lampi, the rise in the tuba sound was better, the room breathed as the cattle grew closer, and the dynamic range and heave increased dramatically as it stampeded through the room.

The second track on Mendelsohn’s Elijah is a favorite for comparing electronics as the complexity is extremely high. It is a mix of low and high volume, different dynamic levels, and a large orchestra. The lower volume instruments were separated and depicted more clearly with the Lampi and seemed lost in sound with the Nagra.

The Lampi was with the Special Lampi EML globe anniversary 45s.

The Lampi continues to be the only recommended digital of this website. Save your money for analog. Audio Lounge has a brilliant TT, and a few tape decks. The Siltech preamp was a surprising new find of high quality that deserves demos and further comparisons to the likes of Ypsilon and some expensive SS preamps for further stress testing. A well set-up YG Hailey continues to be a recommended high budget speaker for those struggling with space. More impressions on YG here. 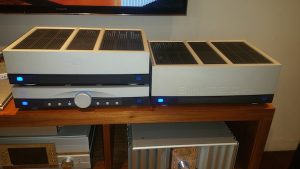 Another interesting point is that the preamp is battery powered, and with a switch you can toggle it on and off the mains. When it runs on battery, simpler music such as Winterreise sounds better, more organic, cleaner, and slightly fuller. However, the dynamics are lost on more complex orchestral, including piano concertos. We also observed that this difference in dynamics was evident only when the power amp was run in triode mode, and not in the pentode mode. But whenever you review a battery product, do check for dynamics, even though the battery might sound cleaner. When David Karmeli blind tested Marty on Marty’s battery power ASR phono, Marty consistently preferred the phono from the mains.